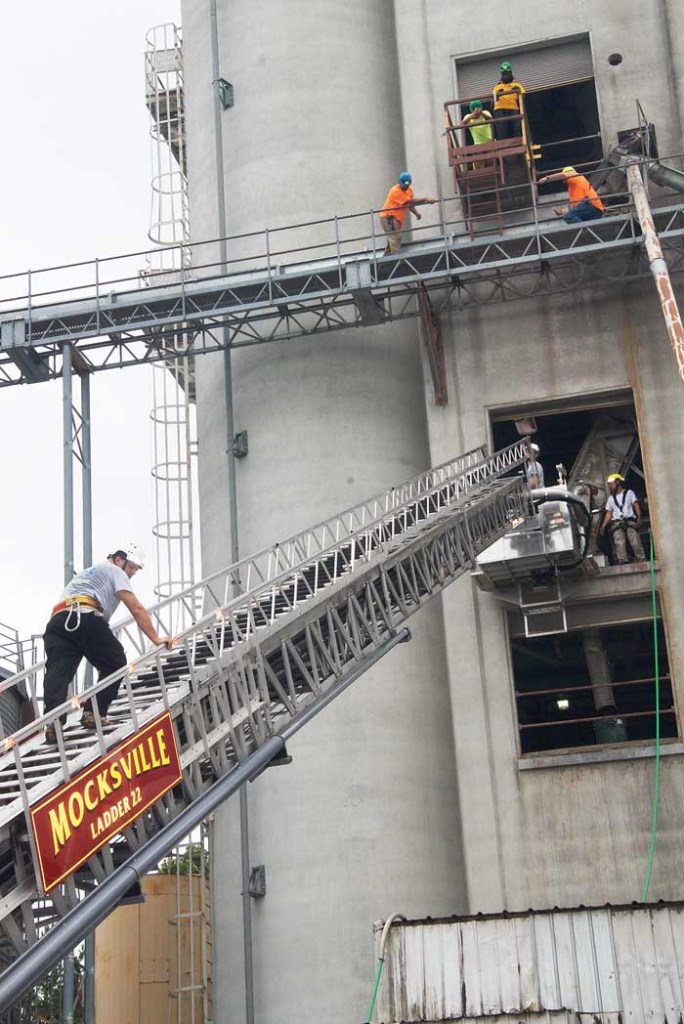 Firefighters and rescue personnel train at The Andersons in Mocksville.

Jay Kimura, plant manager for The Andersons facility on Industrial Boulevard in Mocksville, stresses that every day.

And last Friday, production was shut down so that firefighters and rescue squad personnel could conduct confined space rescue training. Some 28 men and women, some volunteers and some paid, from the Mocksville and Clemmons fire departments and Davie County Rescue Squad, took part in the training.

“We can buy all the equipment in the world, but if we don’t have people with training, it’s no good,” said Mocksville Fire Chief Frank Carter.

He said it took a couple of years to coordinate the training, designed to help teach workers how to treat and rescue injured people from a confined space.

The Andersons has a multi-story production facility, which includes some silos and plenty of close-knit, confined spaces. The facility produces granules used in the cat litter and agriculture industries, as well as for other uses, such as to soak up spills. It regularly donates to local causes, including fire departments.

“It’s all about safety here,” said Judy Shoffner, production coodinator. “Safety is our No. 1 priority.”

The safety shutdown is an annual event at The Andersons.

Friday’s training was rescuing injured workers, and it was conducted from different floors with different scenarios. Rescue personnel had to decide how to get to the victim, how to treat them, and how to get them safely on the ground and into an ambulance.

Before and after each training exercise, those participating talked about what they did right and what could be done better. One mentioned that a gas meter should have been included, because they don’t know why the person went down.

Later this year, the training will focus on rescues from one of the storage bins at The Andersons.

“It’s really nice that The Andersons as a local business sees the need for this,” Carter said.