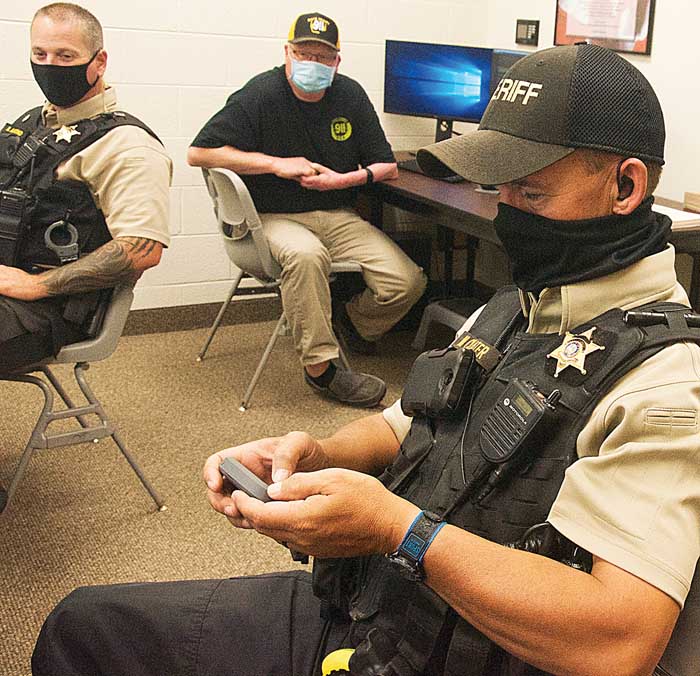 Don’t be surprised if you’re hearing less and less talk on your police radio scanner.

The Davie County Sheriff’s Department, Mocksville Police Department and E911 began using new software this week that not only cuts down on radio traffic, it should make response times quicker and free up deputies for more field work rather than writing reports.

The process began more than two years ago, and comes with a more than $600,000 price tag. But to those involved, it’s well worth the wait and the cost. It took more than a year to develop the program to fit Davie’s needs.

“I think it’s going to be a big help,” said Steve Frye, long-time 911 employee. “They’ll (officers) will be able to see incoming calls as we see them.”

“I do think this will reduce some radio traffic, but officers will still be dispatched,” said Sheriff J.D. Hartman. With the new program, an officer nearby could said they are responding before being contacted by 911. The 911 operator would also be able to see that the officer was responding.

The software also keeps up with the call, from times dispatched to times leaving the scene, and all information the officer and 911 includes will be on a report the officer can immediately send to their supervisor.

“This is a tremendous savings in paper work,” Hartman said. He thinks many reports can be sent to the district attorney’s office for prosecution without ever being printed, another cost savings.

Officers are being equipped with “hotspots,” or equipment that will provide cell service in areas not served by a cell phone tower.

It also manages the caseload for the civil process papers the department serves.

When looking at a map at the 911 center, telecommunicators will see where every officer is at all times. That could help them direct officers in a different direction if there is a chase, either by vehicle or on foot. An app on the officer’s cell phone enables them to be tracked when out of their vehicles.

Hartman gave an example: someone is lost in the woods and injured. Not only would the app help searching officers spread out in the right direction to find the victim, it allows them to take a photo of the injury to be sent to emergency medical personnel, who in turn could provide advice on how to help the victim.

The software can submit reports to Hartman and others that can relay just about anything – from hotspots for crime to types of crimes being reported to the times of day. That helps management put deputies where needed the most, he said.

The current system was installed in 1999, using 1995 technology, Hartman said.

“It was to the point of it didn’t work any more. It was not interconnective.”

Frye admits that he’s somewhat of a technological dinosaur, but is a fan of this new program. “I’m kind of traditional. Technology sometimes goes over my head, but the technology has grown and we have grown along with it. This is good for the county. I think it’s also going to help the fire departments (It’s up to each individual fire department to buy into the program.), EMS, law enforcement.”

“This is so easy, so interactive,” Hartman said. “It gives us all kinds of capabilities we didn’t have before. It really does alter everything.”

There is a public portal portion to the program that can allow residents to file reports without talking to a deputy. If the report requires an investigation by a detective, the system lets officers know.

“I think it is going to be way better,” said Lt. Brad Almond. “It’s leaps and bounds better than what we had.”

Deputy Ryan Moxley said it should help officers, because the time completing reports will be cut in half, and it will alleviate the need to write some reports.

“It will improve our ability to provide services and put manpower where it’s needed,” Hartman said.