Win streak over for White team 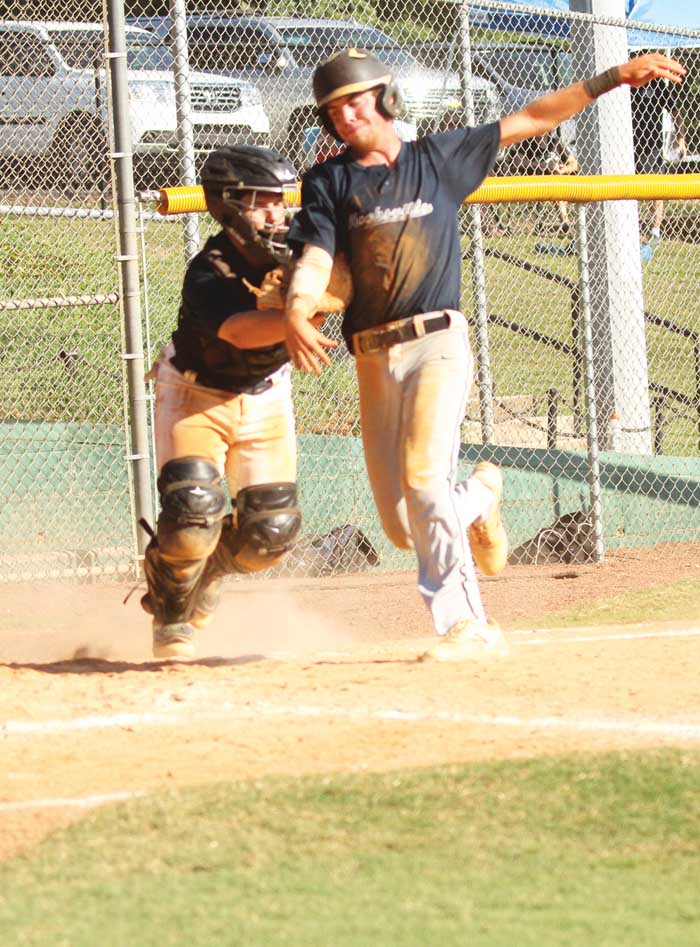 Landon Lowtharpe is tagged out at home against West Forsyth. - Photos by Mark Floyd

Man, was it close to a seventh consecutive victory. The pitching was great again, but the bats failed in the clutch as Mocksville lost 3-1 at Kannapolis on July 21. It was the first setback since July 5.

Two days earlier, Mocksville made magic with three hits as it pulled out a 2-1 win over Statesville. But it couldn’t make three hits work in the first meeting against Kannapolis.

Thanks to four walks, two hit batsmen and errors, Mocksville had plenty of baserunners – just not enough hits with runners in scoring position. “We left 13 on base, six in scoring position,” coach Mike Dinkins said. “We had big-time opportunities. They picked two off at first; that hurt. We had runners at second and third twice and the bases loaded once.”

Mocksville wasted a big scoring opportunity in the top of the first, failing to score despite three walks.

Kannapolis did all its scoring in the bottom of the first, turning two hits, an error and a walk into a 3-0 lead.

Trot Byerly got Mocksville on the board in the third. He singled, stole second, took third on a wild pitch and scored on another WP.

In the fourth, when the bases were loaded for Mocksville’s rock-solid leadoff man, Giovanni Mendez. He flew out to deep right as Mocksville stayed behind by two.

After allowing three runs in the first, Tyler Steele buckled down and responded with zeroes in the second, third and fourth. Vance Visser shut down Kannapolis in the fifth and sixth.

Mocksville’s luck in close games finally ran out. It had won four straight games that were decided by one or two runs – 6-5 over West Rowan, 1-0 over Statesville, 9-7 over West Forsyth Blue and 2-1 over Statesville.

“You knew it was going to happen sooner or later when you’ve been winning all the close ones,” Dinkins said. “It’s going to roll to the other side of the table. We had been on such a good roll, I wanted to keep it up.”

The bright side: This was a nonconference game. “We’re still undefeated in the conference,” Dinkins said.