Pedestrian bridge goes up over I-40 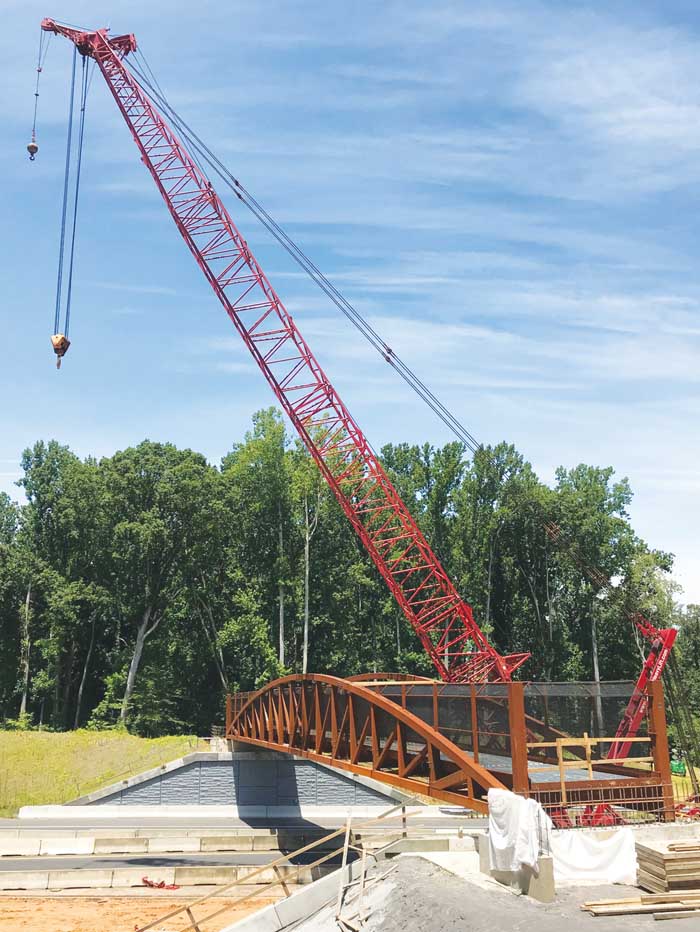 The old Bert Bahnson's Way bridge has been replaced for pedestrians to go from Kinderton village to the business area.

BERMUDA RUN – Long before Bermuda Run became a town – actually during construction for the new I-40 coming through Davie County – a pedestrian bridge was installed over the highway for an important reason.

“There’s quite a rich history with the Bert’s Way Bridge,” Mayor Rick Cross said at last week’s town council meeting. “The negotiation by the owners was we’ll let you put the highway through our property, but since it cuts right through it, we need somebody to get our cattle and us back and forth. So there’s a tunnel, and there’s a bridge.”

That bridge lasted for many years (the first stretch for the interstate in North Carolina opened in Winston-Salem in 1958), but when plans were announced several years ago to widen I-40 from four lanes to six lanes, that meant a change would be necessary due to its age and structural difficulty in lengthening it to accommodate the extra lanes.

And on the night of July 10 and the early morning of July 11, while I-40 was shut down and traffic diverted, the new bridge – located just west of the Yadkin River bridge between Exit 180 and Exit 182 – was put into position.

Bert’s Way Bridge, which connected two sections of the dairy farm, was named after the late Bert Bahnson – whose family owned the land. Bahnson died in 2018 several months before the original bridge was demolished.

Bermuda Run had asked NCDOT to consider a new bridge for vehicular traffic to provide another route between the north and south sides of the town, but it proved to be too costly, according to Town Manager Lee Rollins.

“DOT said that it would cost between $12 million to $15 million and that they had allocated $1 million for a pedestrian bridge and where are you going to come up with the rest,” Rollins said. “The project cost of close to a $1 million would have been basically a concrete bridge. The town worked with them for the visual enhancement to provide the enhanced metal truss look and feel, and we put in $250,000.”

Cross said it represents a visible step in the town’s long-term strategy as part of the comprehensive plan for Bermuda Run, which was incorporated in 1999.

“I’m excited for when it is completed and we have access to it and thinking about then what’s next – and how we connect to the Athletic Performance Center, the Sports Park and the connectivity to the rest of Kinderton Village,” Cross said of the bridge, which extends from behind WinMock at Kinderton across the way to property between the Sports Park and Kinderton Village. “And stay tuned because there’s more to come on that.”

• In a business item, the council approved a resolution directing the town clerk to investigate a petition for non-contigious annexation from Clayton Properties, doing business as Shugart Homes, for the former Moravian Acres property off NC 801 just north of Wake Forest Baptist Health – Davie Medical Center.

Rollins said that this area is within Bermuda Run’s extraterritorial jurisdiction and that  upon petition, signed by all owners of property in the area, the town may annex by ordinance certain satellite areas whose boundaries do not touch its primary corporate limits.

The development, which is named Brayden, features 138 homes on 71 tracts. The original conceptual plan for rezoning, which was approved from Open Space (OS) to Residential Mixed (RM) when brought before the council in June 2019, detailed a mix of single-family and patio homes with the projected price point at the time starting at $230,000 for the patio homes and $250,000 for the single-family homes.

• Cross confirmed that the town’s popular concert series has been canceled for the remainder of the 2020 season because of the impact and restrictions brought by the novel coronavirus.