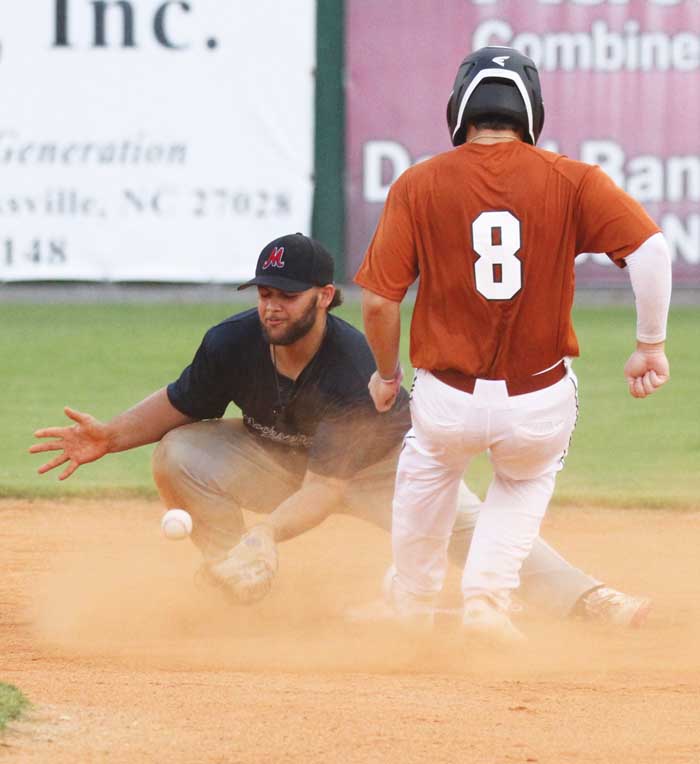 “I think we should have won that game,” Kurfees said. “We gave that game away with mistakes. If we don’t make baserunning mistakes, it’s a lot different.”

In the nightcap, Mocksville roared to a 6-0 lead and held on. A six-run explosion in the bottom of the second was ultimately the difference.

Clary had two of the four hits in the big second, with the other two coming from Wyatt Jester and J. Johnson. Three errors and a walk helped the cause.

Clary was far and away the offensive star, going 3 for 4 with a double as he accounted for half of Mocksville’s hits.

With Kurfees down to few mound options, three pitchers stepped up and held Randolph to six hits.

In the sixth, Little got Randolph 1-2-3 to preserve the 7-6 lead. In the seventh, Williams worked around a one-out walk to earn the save.

“We just threw (Williams) out there,” Kurfees said. “He’s done good (in two relief outings).  He just does what he has to do. He’s a player. Our pitching has done well because we’ve got a good catcher. It makes a big difference when you’ve got somebody like Aaron catching you.”

The teams split a DH for the second time this season. A 5-1 run evened Mocksville’s record at 7-7.

“Five of six, that ain’t bad,” Kurfees said. “We’re playing pretty good right now. That first week, we’d only been on the field three days. The more they’re on the field, the better they get.”