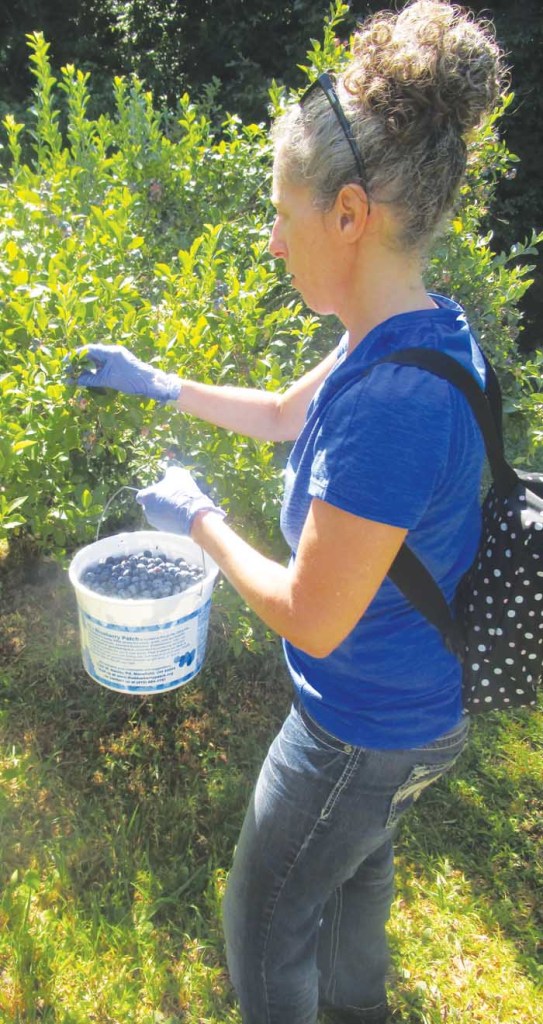 Dawne Good of Advance picks blueberries at Hall’s Farm off NC 801. She has been picking blueberries there for five years. - Photo by Stephanie Dean

Proprietors at Hall’s Berry Farm, Daniel and Misty Hall, let Nature do what she does best– naturally.

Berry pickers come from all around these parts to pick berries. Folks are overheard, saying Hall’s Farm has the best blueberry bushes ready for picking – full bushes with lots of plump, juicy blueberries. What makes the berries even sweeter is knowing they’ve been grown on a heritage farm – one that’s been in Daniel’s family since around 1914. When you pull into the driveway, the first thing you see is something you’d expect to see in days gone by – an old tire swing hanging from a tree limb.

When Daniel’s great grandparents first purchased the 80 acres of mostly wooded land, they raised pigs and cows.  In 1984, when Daniel’s grandparents, Ted and Irene Hall, moved into the white frame farmhouse, they planted blueberries and blackberries on the land. Later, the berry farm opened for public picking.

As the story’s told, Ted worked for Roadway Trucking and drove a truck for a living. While driving through eastern parts of the state, he saw miles and miles of blueberry bushes. As Ted reached retirement age, he came up with a good idea – he’d buy a few blueberry bushes and cultivate a crop as his retirement project.

Following sage advice, Ted planted his fruit bushes in mounds, on elevated rows with a slight slope for proper drainage, with irrigation pipes installed between rows.  He adhered to recommended practice, growing different varieties alongside one another – lowbush, highbush, and rabbiteye – as they grow better when planted together.

Over the last 10 years, nothing’s changed. Aside from having to prune bushes and cut trees growing up in them, there’s a minimal amount of upkeep. The farm uses no fertilizers, pesticides, or chemicals.

The groundwork paid off as the bushes were so well irrigated the first three years, they established a healthy root system.  They’ve maintained their hardiness over the years. At one time, there were around 1,000 bushes.

Misty noted, “The challenge we have is getting enough people here to pick the fruit. The bushes are so full, but towards the end of the season, the birds start getting into them. We want more people to come out.”

Handpicking fresh blueberries is a fun activity for the family – the kids especially enjoy tasting the sweet berries while picking.

After Daniel and Misty were married in 1995, they moved to the farm, and built a home on the land. In 2001, the couple took over the berry business. Located at 110 Annie Lane in Advance, the road is named for Daniel’s great-grandmother, Annie.

Today, Daniel and Misty are the only family left living on the farm. Their 16-year-old son, Mason, wants to live on the farm one day and take over the care of the blueberry bushes.

Daniel still remembers helping his grandpa plant the bushes – continuing to help until his grandfather passed away. Like the berries that grow on the farm today, those are some sweet memories, I’m sure.

Meanwhile, there’s an awfully sweet aroma from a Blueberry Buckle coming from my oven.

In a mixer bowl, beat egg. Add sugar and mix well. Add butter and mix well. Add flour, baking powder, and salt while alternating with milk. Stir in vanilla. Pour batter in a 9-inch butter-greased baking dish. Toss berries in 1 Tbsp. of flour. Top cake mixture with berries. You also have the option of folding the berries in the batter. For streusel topping, in a mixer bowl, combine sugar, flour, and cinnamon. Cut in butter until mixture resembles a coarse meal. Sprinkle evenly over berries. Bake in a 350-degree oven for 25-35 minutes or until knife tests clean. Top with sweetened whipped cream. When I baked this, I doubled the recipe.

To prepare filling, in a mixer bowl, combine softened cream cheese, pineapple, and cinnamon, and set aside.

To make pancakes, in a mixer bowl, beat egg. Add sugar and mix well. Add milk. Mix well. Add flour, baking powder, salt and mix well. Fold in blueberries. Pour 1/3 cup of batter on a hot, greased griddle, making sure it’s spread to a thin consistency. When brown on both sides, remove to a plate. Spread filling mixture on half of the pancake and fold over. To warm, you can microwave for 10 seconds. Sprinkle with confectioners sugar. Drizzle with maple syrup.

In a glass baking dish, place peaches with the cut side facing upward. Sprinkle blueberries around peaches. In a mixer bowl, combine butter, lemon juice, sugar, flour, nutmeg, and cloves. Spread mixture over fruit. Bake in a 350-degree oven for 1 hour. Excellent served with ham or pork.

Combine all ingredients. Makes a little over 2 cups.