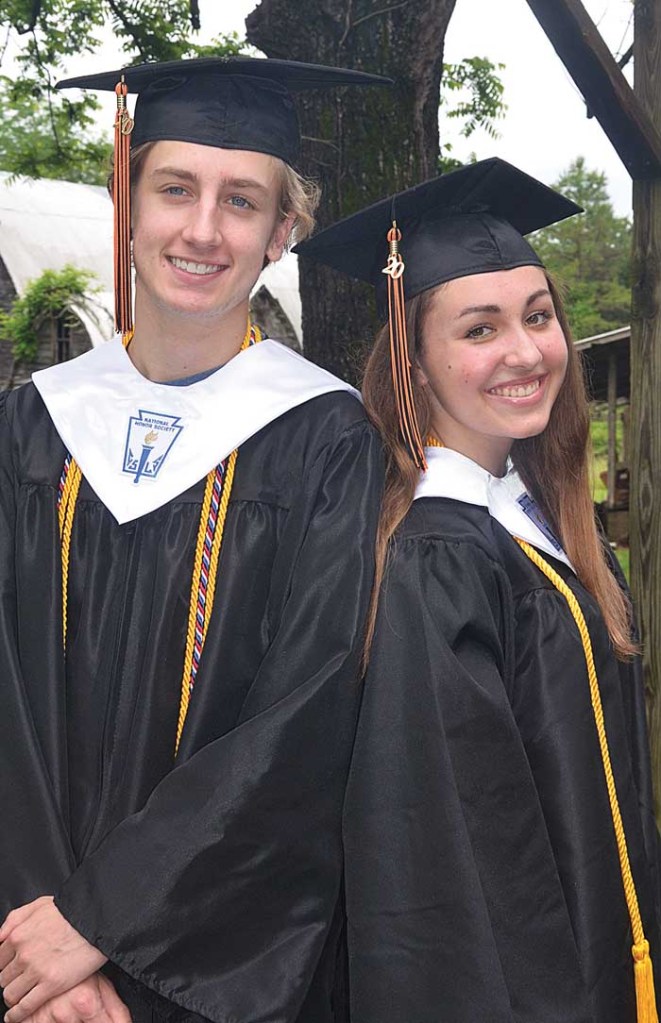 Parker Prysiazniuk and Regan Shoemaker have been classmates from kindergarten through graduation from Davie High School.

In kindergarten, they both got in trouble at Pinebrook Elementary School. They were reading during nap time.

The teacher, Pamela Cope, quickly realized she had something special on her hands, and challenged the two with some extra work.

Now, the two are graduating as the top academic students in the Class of 2020, and Parker was chosen from among the top students to speak during the parking lot graduation ceremony Saturday morning.

The son of Sam and Kristina Prysiazniuk, Parker also received the prestigious Morehead-Cain Scholarship to attend the University of North Carolina at Chapel Hill.

Whether he was going to college in Chapel Hill was never really a question. His sister, Logan, just graduated from there. His grandfather and aunt are graduates. He’s been a fan since he was little.

It doesn’t hurt the scholarship comes with a full financial ride as well as other chances to excel. “It comes with a lot of opportunities, like the summer experience. They’re dropping me off in Alaska for three weeks.”

It was during his senior year he realized he had a chance at winning the scholarship. He was letting his hair grow so he could donate it to charity, and thought that long hair may make him stand out in interviews. So he waited to have it cut.

It makes a good story, but the more likely reasons he won the award were his academic, sports, community and other accomplishments.

He started  coaching tennis and track with Davie County Special Olympics, and became the youngest head coach in the state when he coached the track team – for the past four years. “Those kids changed my life. I went in thinking I could teach them about track and tennis, and they taught me so much more about life.”

He was president of the SURF Board, a youth-led grantmaking board through the Davie Community Foundation.

He was captain of the cross country and track teams at Davie High.

He was president of the Davie High chapter of the National Honor Society.

He said he’s always been competitive, whether in sports or academics.

The Class of 2020 is the last class to have attended the old Davie High and the new Davie High. He’s going to base his speech to classmates on Saturday about such transitions.

“We have a clean slate, a lot of opportunities ahead of us,” he said.

He may also talk about the last few months of school missed because of the coronavirus.

“You go to school for 12 years and you miss the last three months – the best part.”

Regan, the daughter of Kelly Carpenter and Chris Shoemaker, said she’s looking forward to going to college – also at UNC-Chapel Hill – but will miss her friends and the community. She missed her senior season of soccer because of the virus, as well as those special senior activities.

“Enjoy everything,” she said, “even if you don’t like it, you’ll miss it in the long run.”

She is going to study neuro-science ona pre-med track at UNC. “I’ve wanted to be a doctor ever since I was 3 years old,” she said. “I would dress up in my mom’s (She’s a nurse practitioner) clothes.”