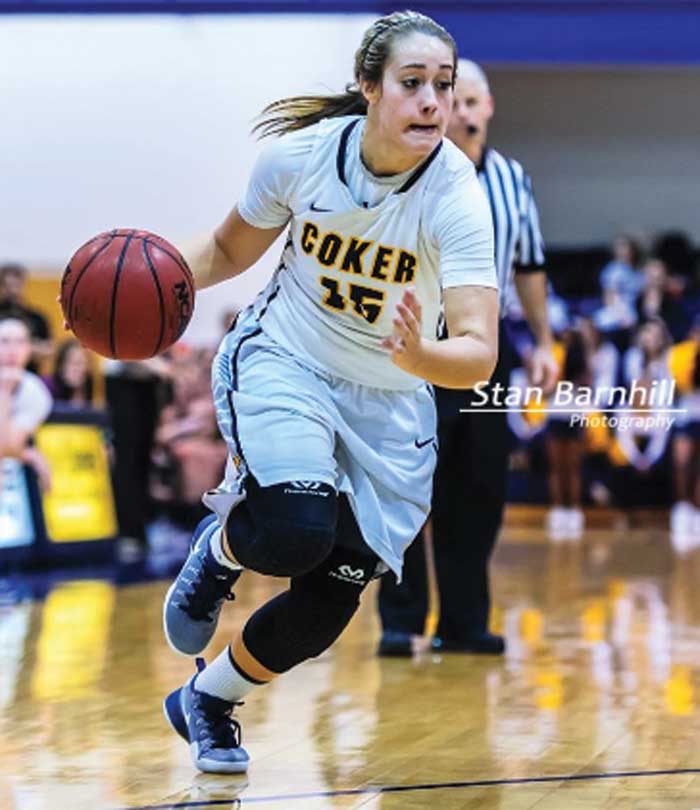 Davie High has plucked Lindsey Adams, who helped the Freedom girls basketball team beat everybody in 2015-16, to revive a Davie program that didn’t beat anybody in 2019-20.

Adams, who was hired June 2, will teach physical education at Davie.

Adams, who will turn 22 on the Fourth of July, is a 2020 Appalachian State graduate who earned a bachelor’s degree in Physical Education with a minor in Sports Science and Coaching. She has one season of coaching experience, and that was an assistant last winter under Hickory coach Barbara Helms. Even though Adams has no head-coaching experience, Davie officials feel confident she is ready for the job.

“She’s (21) but we were assured not to be fooled by that age,” Davie Schools Superintendent Jeff Wallace said. “(We’re convinced) she is by all means ready to step into a large program. What stood out about her was her attitude, her presence and her maturity – maturity much beyond her age. Her maturity and her presence was confirmed by her references that she is most definitely ready for the task. She’s an absolute hard-working person. How do you rebuild a program? Primarily with good, hard work, the right attitude and the right effort. Then you start attracting people. That will start (this) week. That’s the attitude I really liked about her. Let’s go to work and get after it.”

Adams, who was a four-sport athlete growing up, has a big personality.

“First of all, I think she’s going to bring a ton of enthusiasm and energy,” Davie Athletic Director Mike Absher said. “Obviously, she was a really, really good player. She’s also been around good people – coach (Amber) Reddick at Freedom, coach Helms at Hickory and playing at the college level. She’s had the opportunity to learn from them. I think she’ll take all of those experiences and formulate a plan and a vision for what she wants Davie County women’s basketball to look like.”

Adams had her first meeting with Davie players outside the school on June 9.

“I definitely feel like I’ve prepared for it and I knew it was something I could achieve,” she said. “It’s just surreal once it happens.”

“Coaching is something I knew I wanted to do,” she said.

She transferred to a powerhouse program for her final two years. Freedom has been a standard for excellence for many years.

“She sacrificed some of her scoring for the good of the team, and that’s what she wanted,” Freedom’s 16th-year coach, Reddick, told the News Herald back then. “That takes a very unselfish person.”

The 2014-15 Patriots went 23-4 overall and 12-2 in the conference, finishing second to 14-0 Hickory. In the 3-A playoffs, they destroyed their first three opponents (65-46 over Enka, 60-44 over South Iredell and 80-57 over Southwestern Randolph). The run ended in the final eight, a 57-54 loss to Weddington in the West Regional semifinals. Weddington’s Stephanie Watts, a McDonald’s All-American, put on a show with 39 points and eight 3-pointers.

“Stephanie was a senior and she went to North Carolina to play,” Adams said. “We just didn’t really have anything for her. She had so much range she could shoot after she crossed halfcourt. She was about 6-1, so it didn’t matter who we put on her – she could just shoot over them.”

Evan Watts couldn’t prevent a 56-13 stomping from Hickory in the next round. Then Hickory captured the state championship with a 71-53 win over Chapel Hill.

“We could easily have been one and two in the state,” Adams said. “We weren’t able to get the two seed (for the state playoffs) because we were in Hickory’s conference. There were people standing (at those two games). They couldn’t fit in Freedom’s gym or Hickory’s gym, and they’re both two stories.”

During that junior season, Adams was Freedom’s No. 2 scorer and No. 1 3-point shooter (54 makes from distance) while being surrounded by three more double-figure scorers. She averaged 11.8 points, 3.9 rebounds, 2.8 steals and 2.7 assists.

As a senior, Adams played for a fire-breathing, butt-kicking, all-conquering squad. The Patriots went 32-0. They obliterated 30 opponents. The closest margin before the state playoffs was 40-31 over South Caldwell in a hold-the-ball game; the other 25 games saw margins between 16 and 61 points.

The game at South Caldwell was 11-11 at the half. Freedom outscored South 29-20 in the second half.

“Coach (Jeff) Parham did a really good job and he just held the ball,” she said. “I remember fans were booing because they stood at halfcourt and held the ball. That got us out of our rhythm because we were a run-and-gun team. That was the only time we were close to a team at halftime.

“We didn’t really care about conference play at that point. All we wanted was revenge in the state playoffs. There were times we would get more excited about going to practice than we would playing the games just because we got more out of practice.”

The first five playoff games were no different than the regular season. Freedom rolled by jaw-dropping margins: 64-33 over Tuscola, 80-36 over Carson, 68-28 over North Iredell, 77-41 over Weddington and 77-47 over Ashbrook.

The 30-point drubbing of a 30-2 Ashbrook vaulted Freedom into the 3-A championship game against Alissa Cunane and Northern Guilford. Cunane was a 6-3 sophomore; now she’s a 6-5 player at NC State. She came in averaging 18.3 points, 14.5 rebounds and five blocks.

But Freedom was a star-studded team with three players who would move on to the college level. It led from start to finish in a 53-50 decision, Freedom’s fifth state championship.

“(Cunane) was awesome and their team was very skilled,” Adams said. “But what helped us win that game was they had never been on a stage like that. They were full of nerves and intimidated, whereas we started three seniors and two juniors. Being on that platform before helped us keep our composure and not panic.”

Freedom threatened to win by another huge margin, leading 20-7 after the first quarter and by 14 in the second quarter. But foul trouble temporarily thwarted the Patriots, who saw their lead chopped to two with :51 remaining.

“(Cunane) was amazing and they beat our press, and they were the first team that could do that,” Adams said. “We got in foul trouble in the second quarter, so coach pulled us out of the press and that helped them stay with us.”

Adam put an exclamation point on a shining career by draining 3 of 4 3-pointers and scoring 16 points. She took home player-of-the-game honors for Freedom.

For the season, she was second with a 14.1 scoring average. She converted 43 percent of her field goals and led with 72 3s. The 5-8 shooting guard added 3.5 steals, 3.2 rebounds and 2.9 assists. She earned All-Burke County First Team honors for the third time. She was also named all-conference and all-district first team. And oh yeah, she ranked sixth in the state in 3-pointers.

Adams signed early with Division-II Coker University. Had she waited until the second signing period, she would have almost certainly been a D-I player.

“I signed with Coker before my senior season,” she said. “If I could do it over, I wouldn’t have. But when you’re 17 years old, you don’t know the whole recruiting process. I got a full ride and a lot of times D-IIs don’t give you a full ride. That’s why I jumped the gun so early. I had D-I schools contact me later on, but there was nothing I could do because I had already signed my national letter of intent.”

As a college freshman in 2016-17, Adams experienced nearly as many losses in one season as she had in four years of high school. The Cobras limped to 6-21. Adams acquitted herself well, averaging 7.3 points and 18.8 minutes while appearing in 26 games and making five starts. She caught fire in the final three games, scoring at least 16 in each.

“We had a first-year coach,” she said. “It was a building program, so it was really hard for me coming from always winning. I also wanted to move closer to home (Morganton). It was three hours away (Hartsville, S.C.).”

“App had asked about me after the state championship game,” she said. “I was a preferred walk-on. I didn’t request my release until April or May, and by that time App already had their recruiting class for the next year.”

Things did not work out like Adams envisioned. She never suited up for the Mountaineers, decided to become a regular student and graduated in four years.

“That summer (2017) all the assistant coaches left,” she said. “Before the season started I decided it was just too stressful for me. It was a good learning experience and I wanted to focus on school. I could have left; there were other schools contacting me. But at that point in time, my academic career was more important than basketball because I knew I wasn’t going to play professionally. I was more worried about getting a career because App is so highly ranked educationally.”

Adams assisted an outstanding Hickory team last season. The Red Tornadoes went 21-7 and reached the third round of the playoffs. They finished second in the conference, three games behind Freedom.

When Freedom and Hickory faced off twice, fans were shocked to see a player from the Patriots’ legendary 2015-16 season sitting on the Hickory bench. Freedom, which finished 29-1 with a three-point, final-four loss to Southeast Guilford, hammered Hickory by scores of 63-46 and 83-51.

“It was definitely strange walking into my home gym with Hickory,” she said. “When we walked into the gym, the girls all pointed at my picture hanging on the wall. Freedom is known for having very loyal fans, so sitting on the bench in front of them I could see confused faces. Some even shook their head while smiling. The Freedom community is a family. Although Hickory has been a long-time rival, I knew I had the fans’ and coach Reddick’s support on whatever decision I made towards my coaching career even if it was at a rival school.”

No doubt, Adams has a daunting task at Davie. The War Eagles have dropped 82 of 97 games over the past four years. They were cellar dwellers in the Central Piedmont Conference the past three years, losing 29 of 30 league games. They will carry a 26-game losing streak into 2020-21.

They were painfully young last season (0-25 with 10 freshmen, four sophomores and one senior when the season started). There hasn’t been enough girls to field a JV team since 2017-18. The good news is 14 girls – assuming they all return – will have a year of varsity experience under their belts come November.

“JV is just as important to me as varsity,” Adams said. “It’s really, really important to get more girls out and get them interested.”

“I think (the Davie job) is wonderful,” she said. “She is mature beyond her years. She has a passion for the game. She understands the game; she was always a real smart player. Any coach starting out, you’re going to have your bumps in the road. But I definitely think she’s ready and can handle it. I think she’ll do a good job as far as being able to build a program. I could definitely see (a future coach) in her because of her leadership ability. She could stay calm and handle tight situations. Honestly, I’d been talking to her. If we’d had any positions at Freedom, I would have tried to steal her.”