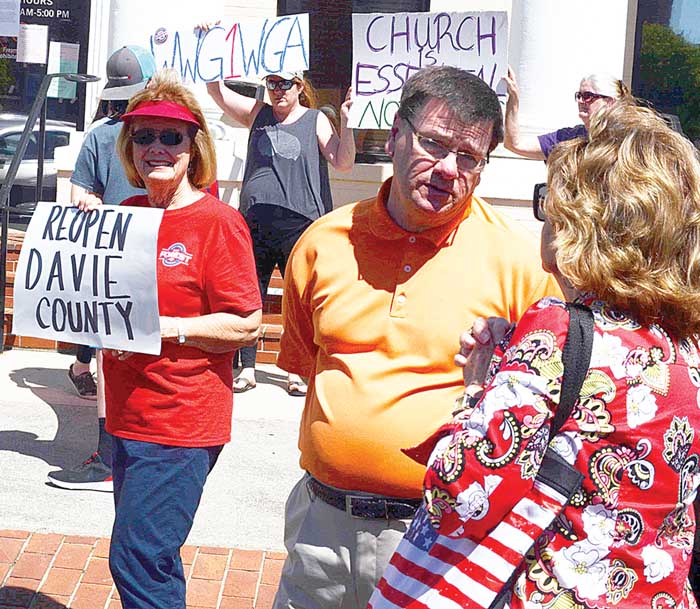 Joey and Stephanie Care were running their dream job – a gym called Red Line Fitness in Mocksville where people could exercise, lift weights and make their life better.

When they learned the coronavirus had reached Davie County, they began to install new rules requiring social distancing. They cleaned equipment more often. They cancelled all group classes. Gym members were self isolating.

After that, the governor ordered the business – and many others – to close. They were a week away from their one-year anniversary of buying the business – formerly Gym 365.

Stephanie Care gets emotional when talking about it. Books are in the negative already, and they’re still not sure when they will be allowed to reopen.

The couple were two of many who showed up in front of the Davie County Courthouse Monday afternoon for a ReOpen Davie County rally, also attended by two county commissioners and a state senator. Many held political signs, others said things such as “Church is Essential” and “We Want To Work.”

Elizabeth Hilton and her children were among those holding signs.

“We want to see our local officials hold up their end of the bargain. They took an oath to uphold the Constitution and have failed to do so,” she said. “Every business is essential.”

Jeff Plott and Joan Fleming helped organize the rally. “We need to reopen  Davie County,” Fleming said. “We’re Americans. We’re used to working.” She said the governor overstepped his authority ordering people to stay at home and declaring some businesses essential and others non-essential.

Plott said Davie has had only 31 cases of coronavirus confirmed out of a population of nearly 43,000. Small businesses are closing for good because of the governor’s order.

County Commissioner Mark Jones spoke, quoting Thomas Jefferson: “I would rather live in dangerous freedom than I had in peaceful slavery.”

He questioned why liquor stores and abortion clinics and big box stores are still open when houses of worship and small businesses are closed. “This is not right. It’s time to reopen. The bottom line is, its time to go back to work and it’s time to re-open businesses back up.”

State Sen. Joyce Krawiec said she understands the hardships people are going through. Many who lost their jobs were living paycheck to paycheck, she said.

Krawiec said she believes more decisions should be made on the local level. “You know what’s best for Davie County,” she said. “We don’t want anybody to be sick. Business owners do not want their employees or their customers to be sick.”

Responding to a question, she said North Carolina would not hold mail-in ballot only elections this fall.