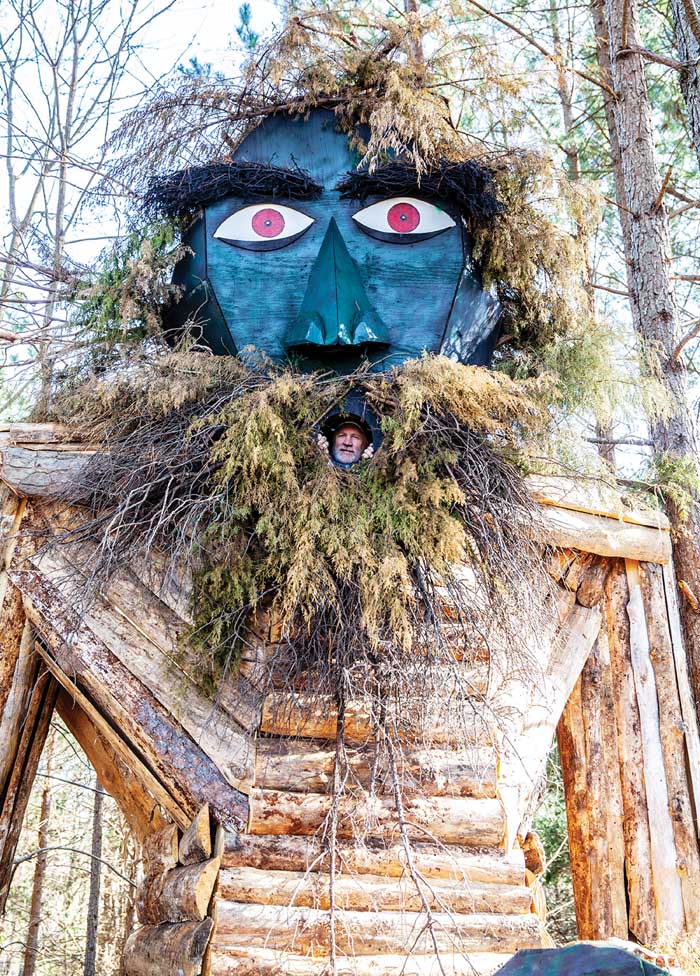 Hursey looks out from the mouth of "Og.' A ladder inside allows visitors to climb up for a photo.

Jeff Hursey runs a successful heating and air conditioning business in Davie County and those who know him would say he is a soft-spoken guy.

I’ve never known Hursey to cause a ruckus about anything but his name has been spread all over the country and everyone is talking.

People were calling the 911 emergency line to say they just saw Bigfoot.  When the dispatcher asked if they were on Pine Ridge Road, they were told their call was one of many.

That was the start of a viral reaction on Facebook when a picture of Hurseys’s hand carved Bigfoot was posted and created national news  – all the way to Anchorage Alaska.

By owning a sawmill, Hursey has always messed around – carving stumps to look like owls, hobbit houses or small bears  – but he had never done anything big.

He saw a concrete bear near Dobson on the side of the road and it gave him the idea to carve one – but bigger.

The Big Foot stump measured nine feet from the bottom to the top.  He had tacks for his eyes and they were covered with red reflective tape.  Drivers passing by at night surely got an unexpected surprise.

He admits it took him a while practicing to turn something out that looked decent. Using a smaller saw with different tips helps create the details he needs.

Not a lot of planning prepares him for the next project, he uses what he has on hand and once he gets it in his mind what he thinks he can do with it, he goes for it.

Sometimes he burns the wood for accents and often preserves the wood with used oil.

The Flintstone car he made looks like an exact replica. Not everything he does is chainsaw carving – but more sculpture.

Last September, I drove by the site not knowing about the national interest and I was quite alarmed when I saw a huge spider with legs stretched over the split rail fence with orange fangs.  He was looking right at me and it gave me the sense he was coming straight toward me. A big web was hanging behind his back.

Hursey had a lot of slabs lying around and decided to build a giant.  Og the Giant is 20 feet tall from his head to his bottom and another 20 feet for his legs and feet.  His broad shoulders, long arms, big feet and hands have good proportioned scale.

Positioned between two strong pine trees for increased stability and strength, he appears to have been strolling through the pine trees and decided to have a sit down. With his left arm resting casually on his leg it poses a calm demeanor – just a big guy ready for someone to stop for a chat.

Evergreen branches were used to create his hair and beard and the now aged brown tones make it more lifelike. Many people who stop by to visit the site like to climb the stairs inside Og the Giant so they can put their face in the hole of his mouth for a picture.

Hursey’s wife Rebecca suggested he call the giant Og because it made her think of the giant in the Bible, Og king of Bashan; his bed was 9 cubic feet by 4 cubic feet.

A 35- by 43-foot pirate ship has been completed.  Inside the hull is a picnic table, portholes to look through and who knows what else Hursey’s creative mind conjured up.  Embellishing the structure with flags and all pirate paraphernalia will for sure be a showstopper.

When you combine a creative mind with resources like strong hands, a sawmill, a chain saw and mostly wooded acreage, there’s bound to be more to come in the future.

A gate is located at the entrance but Hursey welcomes visitors to get out and walk around to take pictures. A bench is located at the information area that displays a small fraction of articles from different states.

Who knew a Bigfoot creature carved from a stump could create such a ruckus and excitement.  Thank you Hursey for putting Cooleemee on the map.

The sculptures are off Pine Ridge Road in southern Davie County.