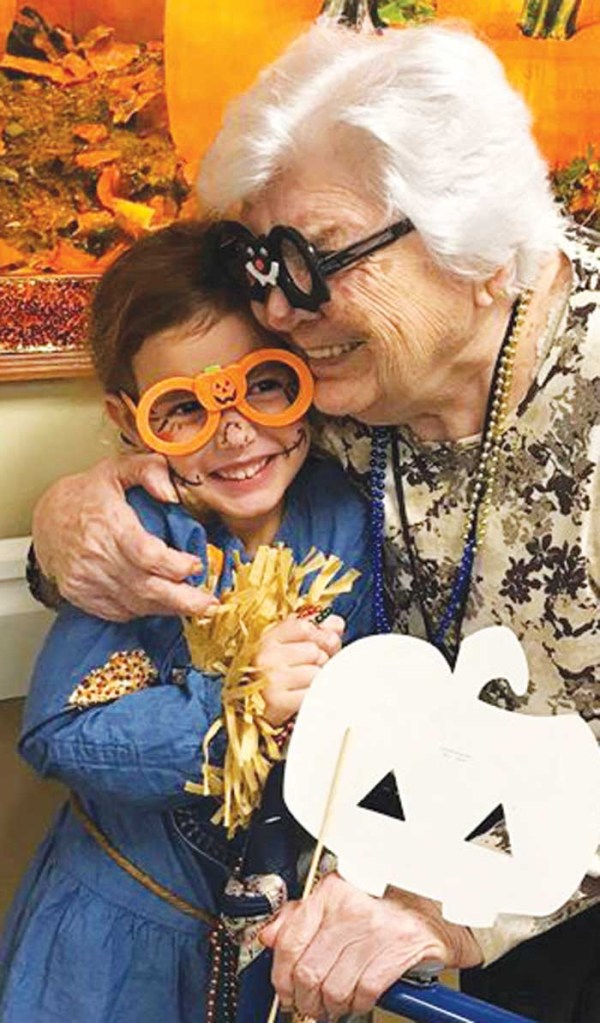 What’s a girl to do during a quarantine?

If you ask 4 year-old Josie Orsillo, she would say “Facetime your friends!”

In Josie’s case, many of those friends are the octogenarians at Somerset Assisted Living in Mocksville. She has been staying in touch by sending them video updates twice a week from her grandparents’ living room.

Last summer, when Josie wasn’t playing with her dolls or with her little brother, John Michael,  she  could often be found hanging out with the folks at Somerset.      Josie, who stays with her “Gigi”  Kim Crowley while her parents are at work,   accompanied her grandmother  to Somerset Assisted living to volunteer.   During those visits, she sang songs, rolled cookie dough, served punch, decorated cupcakes, played games and enjoyed visiting with many of the residents.

Her grandmother states: “ I was an activity director for many years at a nursing home in Rowan County, and know the tremendous impact children have on the elderly. A lot of our residents came to us with  physical limitations or struggled with mobility and  many simply  gave up when they were placed in long term care.

“When the children were around, however, they forgot their own physical limitations, and became encouraged.  They stretched themselves a bit, leaned forward in their chair, extended a hand, and engaged in conversation.”

She said that several depressed residents would absolutely light up when school groups came into the facility.

“Their whole demeanor changed. They smiled, laughed and joked with the children.  One non-verbal resident even began to speak again.  Then after the children went home, it gave the residents something joyful to talk to each other about.  They laughed more, they ate better and they slept great after a visit from the kids.  It was so remarkable, I will never forget it.”

When she retired in 2016, Kim Crowley knew she wanted to find a way to volunteer with her own grandchildren.

he reached out to Somerset’s activity director, Angel Parrish, who was enthusiastic about the idea.

“Anytime kids are involved, I know the residents are gonna be happy,” said Parrish.

The residents enjoyed Josie’s visits so much that Parrish began posting videos on the facility’s FaceBook  page  for the residents to  share with their families, titling them “ Sweet Josie Jams.”

While she knew it would be beneficial to the residents, Kim was unprepared for the positive impact volunteering would have on her granddaughter.

“She was around 2 years old when I first began taking her for short trips to sing songs to them during their lunch in the dining room.  Once or twice a week, after I picked her up from preschool at First United Methodist, we’d go across the street to Somerset and be in and out of the facility in less than 10 minutes. It was enough to plant the seed.  She enjoyed the undivided attention she got from the residents.  Nobody was on their cell phone, and no one was ever too busy to talk to her.  Children love that, and it builds self-esteem.

“So she began wanting to do more, and that snowballed into our monthly Friday cooking class at Somerset, where we prepare simple recipes with the residents.

Josie, who has her own apron and chef’s hat, helped prepare the tables and passed the ingredients out to residents, chatting was she worked.   It was during that time that I saw that child grow in confidence and communication skills. “

Now that the seed has been planted in Josie, she has inspired her parents, Kenny and Casey Orsillo to visit Somerset as well.

Kenny and his band “Down the Mountain” have performed at the facility on several occasions, with Josie “playing” along on her purple princess guitar.

Casey loves the relationships her daughter has formed with the residents. “The most important thing in life is to be loved and to show love. During this quarantine, if we can ease someone’s loneliness and learn empathy for others, is there a better life skill to learn than that?,” Casey said.