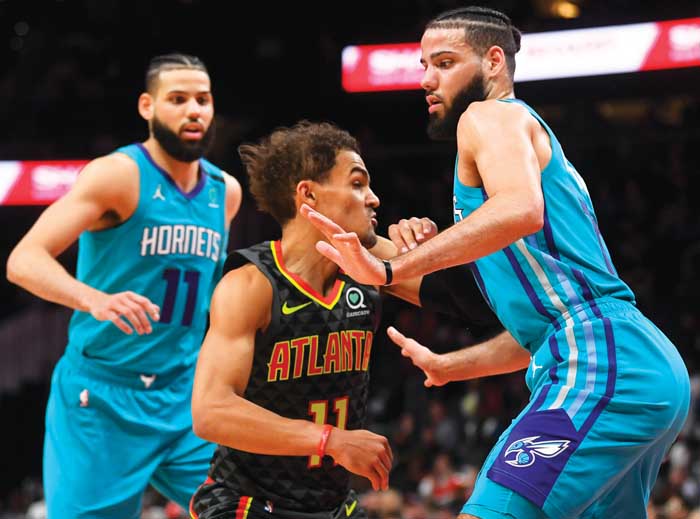 When the NBA season tipped off in November, Cody Martin was a spare part on the Charlotte Hornets’ bench and Caleb Martin was playing for Charlotte’s G-League affiliate, the Greensboro Swarm.

When the NBA season was suspended in March by the coronavirus pandemic, the Davie County twins were playing significant minutes for the Hornets.

Yep, they answered a lot of questions in their rookie seasons. Both are obsessed with improving. Both bring infectious enthusiasm. And coach James Borrego spoke of them in glowing terms.

“They affect the entire group with how hard they play, the passion they play with, the resiliency and the defense,” Borrego told reporters. “They’re core culture guys for us.”

Cody was picked in the second round of the 2019 NBA Draft and signed a multi-year deal with the Hornets. Even though Caleb was more heralded than his brother after averaging 18.9 and 19.2 points during his junior/senior seasons at Nevada, he went undrafted, signing with Charlotte as a free agent.

As good as those outings were, Cody’s value won’t be fully appreciated unless you’re watching the coaches’ film. He’s a consummate team player. He has a seemingly endless amount of energy. He takes pride in doing the dirty work.

“I think it’s just paying attention to detail,” Cody said. “The biggest thing for me is just bring effort and energy. I really believe that when you play hard, good things happen.”

Meanwhile, Caleb was superb for Greensboro while starting all 28 of his games in the G-League. Through will and work, his shooting improved markedly from his senior year at Nevada. He shot .363 percent from 3 and .535 on two-pointers. He averaged 21.4 points, 6.1 rebounds, 3.7 assists and 1.6 steals.

After making just five NBA appearances from late November through early February, Caleb was recalled to Charlotte on Feb. 8 as the Hornets made a series of roster moves. He never left.

Just like their days at the Brock Gym, South Davie Middle, Davie High, Oak Hill Academy, N.C. State and Nevada, the twins were teammates again, at the sport’s highest level, no less. And in a 104-103 home loss to San Antonio on March 3 – this is so ridiculous – both scored in double figures. Cody got one of his three starts and responded with 13 points, five rebounds and four assists in 34 minutes, nailing 6 of 8 field goals. Caleb came off the bench for 12 points and three rebounds in 26 minutes, converting 5 of 9 field goals and 2 of 4 3s.

In a 108-99 home win over Houston on March 7, Cody had nine assists and played admirable defense on James Harden, one of the top players in the world. Harden had 30 points but needed 22 shots to do it. He missed nine of 11 3-point attempts and committed 10 turnovers. Cody and Miles Bridges shared the defensive assignment on Harden, but Cody was the primary defender in the fourth quarter.

In a 109-98 win at Miami on March 11, Caleb had 19 points, seven rebounds and three assists, hitting 3 of 6 3s and 8-8 free throws. Cody had six points, eight rebounds and two assists. They both played 32-plus minutes for the second game in a row.

“I know everything he is going to do, (and) vice versa,” Cody said. “It’s a lot of fun and we are blessed to be able to do this (together). I think that we complement whoever we play with really well because we just try to bring a lot of energy, just basically doing whatever is needed for us to win.”

“The notion of me coming out of college was that I just shot and played offense,” Caleb said. “I just wanted to show guys I can do more than just shoot. I try and guard and just be like my brother and do all the other things, too. Defense is the biggest thing for me to stay on the court right now.”

Right when the twins were becoming major contributors on a nightly basis, the season stopped. The Hornets were 19-38 before going 4-4 between Feb. 26-March 11. COVID-19 could end up canceling their final 17 games.