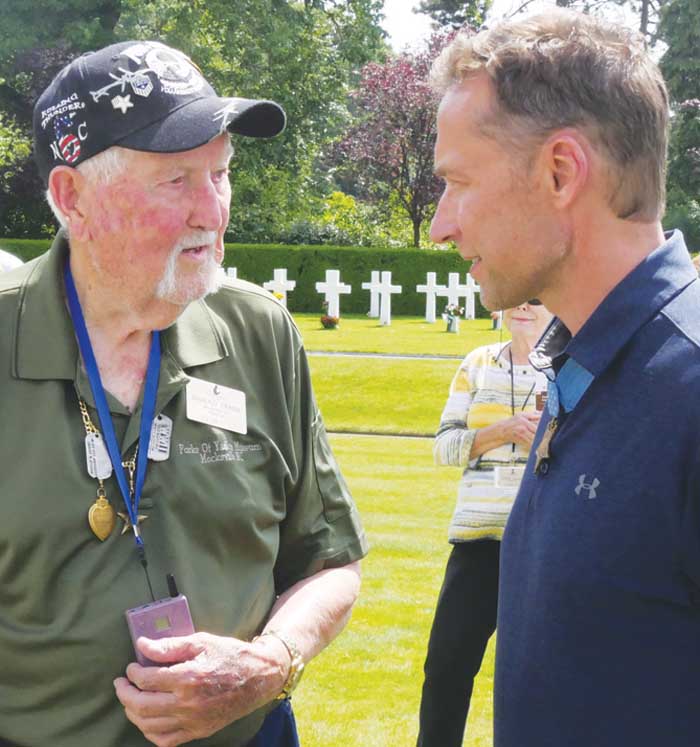 The film, “The Last Gathering: 75th Anniversary of D Day” marked the 75th anniversary of the Normandy landings. It was viewed as the last large gathering of Normandy veterans.

Forks of the Yadkin Museum Board President and adjunct history professor at Lenoir-Rhyne University, Hager, a US Army veteran himself, was given the honor to travel, with this last large gathering of Normandy campaign veterans. They spent 10 days visiting remnants of the Atlantic Wall and battlefields stretching across France and Belgium.

Hager chose to focus on three Normandy campaign veterans from North Carolina: CSM Kenneth “Rock” Merritt of Fayetteville, who jumped with the 82nd Airborne Division;  James Deal of Faith, who was a Sherman tank crew member in the 35th Infantry Division; and lastly, hometown hero Harold Frank of Cornazer, who fought in the 90th Infantry Division, and has been featured by Hager in a previous documentary.

Frank was also at the center of an interview for the Davie County Enterprise Record, appropriately titled, “To Hell and Back” by Mike Barnhardt. The current film follows the story of each of the men during the Normandy campaign. Hager found that each veteran expressed the exceptional importance of faith, duty, and courage which still permeates from each of the veterans.

• Merritt was in the 82nd Airborne’s 508th PIR (Parachute Infantry Regiment). On June 6 at 0215, his unit jumped into Normandy. Their main objectives were to capture the town of Sainte-Mère-Église, and adjacent crossings along the Merderet River at Chef-du-Pont and the La Fiere Causeway. The weather combined with intense German anti-aircraft fire, to cause miss drops, which hampered the 508th and most other PIRs. Many dropped into flooded fields and drowned. Others, caught in trees across the numerous entanglements notoriously used as hedgerows.

Luckily, Merritt hit a piece of dry land and watched as a burning C47 just 100 feet above him crashed close by. The chain of command of his unit had been wiped out. Merritt by D-Day plus 4 (June 10) became locked in a desperate fight to reach Hill 30. Many of the men were badly wounded and needed blood plasma. The Battle for the Le Fiere Causway commenced from June 8-10. Then the 90th Division arrived and helped them cut through to Hill 30.

• Deal’s unit landed at Omaha Beach after D-Day to prepare for General Patton’s Operation Cobra. The goal was to break through the hedgerows of Normandy and follow the coast line and catch the German Army before it could retreat out of the Normandy Campaign. The first attempt to move into the hedgerows was met with disaster trying to move up and over hedgerow embankments which were over 5 feet tall in places. The Sherman Tank became vulnerable and, in many cases, overturned. The tanks were brought back to the beach area. Engineers removed Germany tank/ship barriers and cut them into large spikes and welded them to the front of the tanks. The tanks of the 737th moved out and this time broke through the hedgerows and made it to St Lo. This effort helped the Airborne Soldiers, along with the 90th and 35th Infantry Divisions to break through German defenses, thus securing the Cotentin Peninsula, which was the main goal of the Normandy Landings for the US Military.

The challenge for Hager was to record how the veterans would react to returning to Normandy. The trip would begin in Amsterdam.

The World War II veterans would be visiting remnants of Nazi Germany’s “Atlantic Wall.” Followed by battlefields in Belgium to include the World War I American Cemetery at Flanders Field. Then, the veterans would visit Dieppe, France which was the scene of the first, and failed, attempt to make an amphibious landing of France. More than 2,000 Allied soldiers are buried today in Dieppe. Afterwards, the veterans would be taken to the beaches of Normandy to prepare for the 75th Anniversary ceremony.

Hager, credits the National World War II Museum in New Orleans for making the trip happen. The youngest veteran he met on the journey was 94. Many felt that to pull off another reunion like this for an 80th anniversary would be difficult. That 94-year-old veteran would be 99 at that point. Approximately 100 WWII veterans were present for the main ceremony – a small number compared with the 150,000 who landed at Normandy on D Day.

“This trip was special, and everyone I met knew it,” Hager said. “It had to be recorded and brought back for all Americans to watch. Especially for the people here in North Carolina. We shouldn’t ever forget the sacrifices these men made during D-Day and the Normandy Campaign. By the time Paris was liberated, one American soldier was wounded every 5 meters, and another, killed every 10.”

Besides teaching at Lenoir Rhyne, Hager serves as president of the Forks of the Yadkin and Davie County History Museum.

Recently, the museum purchased and cleared property in Mocksville where they plan to build in the future.

Viewings of the film will be scheduled in Mocksville, at Ft. Bragg and at the National WWII Museum in New Orleans.