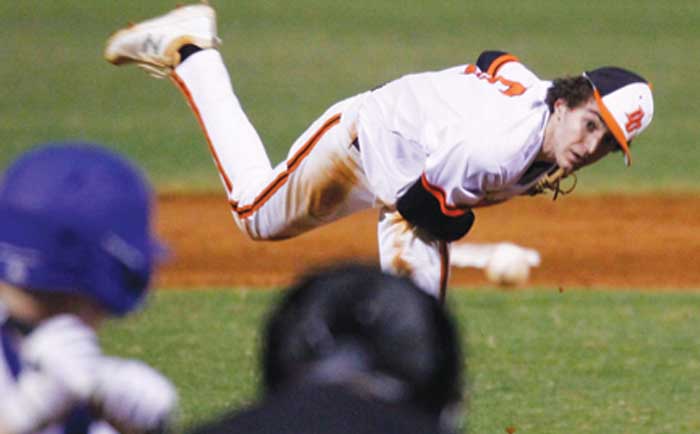 Senior Anthony Azar fires a pitch against Mooresville in the 2020 home opener. - Photos by Mark and Tammy Floyd

Spencer Nifong was in midseason form in the first game, Joe Johnson smacked two doubles and Daniel Lawson, who had one at-bat as a varsity freshman, shined in his first Davie start as the War Eagles earned a satisfying 8-1 road win over Carson on March 2.

It was an impressive way to begin the season, against a Carson team that went 27-5 and reached the 3-A regional final in 2019.

Davie’s offense erupted right off the bat, scoring five runs in the top of the first. The Cougars aided the rally with two errors and a walk after Davie had sent up four batters. Then Davie made them pay. Johnson hit a two-run double over the center fielder. Lawson ambushed the first pitch he saw for a single. Two walks and a hit by pitch followed as Davie batted around.

Baseball, as you know, is a funny game. Davie won by seven even though the hits were 6-6.

“But we had a lot of loud outs,” coach Bradley Rudisill said. “Guys were squaring balls up and made them make plays.”

Carson did not make the plays, committing four errors. Johnson was terrific with three RBIs.

“On one of his outs, the center fielder was up against the fence,” Rudisill said. “It probably would have got out of the park (had he not caught it). The guy was playing him near the wall. Joe was very locked in.”

Lawson (2-4) had an eye-opening performance batting right behind Johnson in the six hole.

On the first-pitch hit in the first: “I told him: ‘He’s not been able to get that curveball across. He’s probably coming with a fastball, so be ready to jump on it.’ I turn around and he’s cruising around first base. He had a really good night.”

The quick-striking offense only tells part of the story. Zach Rodgers got outs when he had to have them, overcoming five hits and two walks in three innings and leaving with a 5-1 lead. The one run off him was unearned.

Nifong, who got the win in relief, was sensational. In 3.2 scoreless innings, he gave up one hit, walked none and struck out six. He threw 26 of 40 pitches for strikes. John Davenport got the final out in two pitches.

“Zach wiggled out of some jams,” Rudisill said. “He did everything he needed to do. He attacked batters.

“I wanted to see other pitchers because it had been a while since we’d thrown in live games. Spencer gave them a different look – different side, different arm angle.”

The defense complemented the pitchers. Troy Clary and Blake Little turned a 6-4-3 double play, and shortstop Clary had a pair of unassisted DPs.

Despite the lopsided final, there was drama for five innings against the visiting Blue Devils on March 4. It was 1-1 after five. And then …

Davie wilted in the sixth and fell to Cameron Clonch and the defending 4-A champions.

“We were right there,” Rudisill said. “We had multiple opportunities to win that game. We just didn’t come through when we needed to.”

Nifong got the start on the mound and hung three zeroes after Mooresville scratched in the first. He was pulled after 76 pitches, 52 of which were strikes. Clonch, meanwhile, kept throwing until he surpassed 90 pitches.

Davie pushed across a tying run in the third, a rally that began with two outs. Anthony Azar walked and stole second. Clary reached on a third strike in the dirt. Azar scored on Garrett Chandler’s infield hit.

But that was all Davie could muster against Clonch, an imposing 6-4, 185-pound senior who is headed to East Carolina. Last year as a reliever, he posted an 0.72 ERA to help Mooresville achieve 24 wins. He pitched a two-hitter for 6.1 innings against Davie. On the flip side, Davie only struck out five times, so it wasn’t like it was overwhelmed.

“When you only have five strikeouts against a Division-I quality arm, you can’t really be upset,” Rudisill said. “I didn’t know how Lawson would fare against an upper-80s arm with a really good breaking ball, and he held his own. The batting average (.156 through two games) doesn’t show it, but we have battled at the plate.”

Crap hit the fan in the Mooresville sixth. The first two batters walked. After Rudisill made a pitching change, Davie threw to third on a bunt. The runner was safe and the bases were loaded for No. 3 batter Clonch, who promptly rapped a two-run single. An error and another two-run knock followed as Mooresville blew it open, 6-1.

Four of Mooresville’s seven runs were unearned as Rudisill employed Azar, Davenport and Will Summers from the bullpen. Even though Summers walked three in one inning, he liked what he saw from the sophomore.

“I like the way Will threw,” he said. “We made an error on a routine groundball or he wouldn’t have been in that situation.”

Chandler, who walked twice, and Johnson had Davie’s two hits. Davie hurt itself with three errors. Mooresville, by contrast, had zero miscues.

Rudisill does not schedule nonconference cupcakes. A game like this should benefit Davie in the long run more than a mercy-rule win over a patsy.