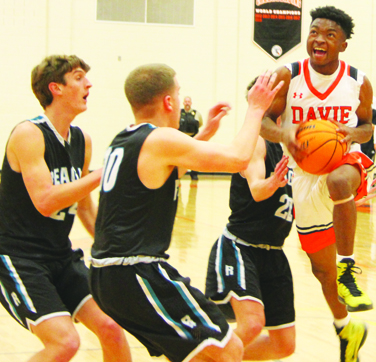 There were not many electric moments like the overtime win over Glenn on Jan. 17, but Davie’s boys basketball team did what it had to do in a 59-54 home win over Reagan on Jan. 28.

Even though the Raiders are 6-12 overall and 1-4 in the Central Piedmont Conference, even though Davie has a six-game winning streak in the series, coach Mike Absher was braced for a battle.

The War Eagles, who were coming off back-to-back losses for the first time since the 2017-18 season, remained in the CPC hunt. Reynolds entered the week in first place at 4-1. Davie, East and Glenn were tied for second at 3-2. West did everyone a favor by knocking off Glenn in triple overtime. Yes, Glenn’s two CPC losses were both in OT.

“As a coach, you’re always interested to see how your team will bounce back from the week before (when Davie lost to Lexington and East),” Absher said. “Not only did we lose twice, we lost by double figures. The fact that they were able to be physically and mentally tough enough to do the things we had to do to win the game speaks highly of them.”

Every time Reagan made a run at Davie, the War Eagles had the answer.

After Reagan nailed two outside shots to tie the game at 33, Redmon sparked a 17-6 run with another triple. The run included an Avery Taylor bucket inside, a Johnson drive and spin move for two and an Alex Summers buzzer-beater at the end of the third on a short jumper along the baseline.

Davie (12-6 overall) opened the fourth with the backdoor play you’ve seen before, Za’Haree Maddox to Johnson, who scored as he was fouled and hit the accompanying free throw. Maddox drove for two and hit two free throws to cap the 17-6 run that provided a 50-39 lead.

The Raiders weren’t quite done. They fought back to 53-48. The War Eagles, who are 9-0 when leading after the third quarter, once again executed superbly in their delay game. On one possession in particular, they appeared to lull Reagan to sleep as Iverson King fired a bullet pass underneath to Reid, who scored after Davie had milked precious time off the clock. Smith’s offensive rebound led to a trip to the line for Maddox, who hit both to all but finish off the Raiders at 57-49.

Reagan hit a meaningless 3 at the buzzer to cut the final margin to five.

“Coach (Bruce) Wallace and I were talking about that (King-to-Reid pass) after the game,” he said. “We did a great job there with spacing. Everybody stayed out of the double-team areas. Iverson caught the ball, took one dribble and hit James. It was picture perfect. That was a big play from a freshman (King).”

“We tweaked some things defensively, and our guys executed it really well,” Absher said. “On Monday we said we’re going to change what we’re going to do in a particular situation. We practiced it for 15-20 minutes. For them to go out and execute it was really good.”

Reagan, though, shook off the 15-percent shooting through 19 attempts. It made 17 of its final 27 shots, including 6-11 accuracy from beyond the arc.

“Their record is very deceiving,” he said. “They have the ability to beat anybody (in the CPC). They have some good pieces, so we knew it was going to be a tough game. I’m proud of the guys for their ability to put the week before behind them. Reagan came in with every intention of winning the game.”

Maddox’s fingerprints are all over Davie’s perfect record when leading at the end of the third. Although he wasn’t great shooting from the floor, he made 11 of 14 foul shots to finish with a team-high 17 points. He also had six assists, three rebounds and three steals. Last week brought more joy for the sophomore as he received an offer from Division-I High Point.

“He’s really good with it out there (in the clock-eating, five-out offense),” Absher said. “He wants the ball right then, which I really admire. You like kids who want to be in that moment.”

Reid had a nice game, scoring 11 points on 5-9 shooting and controlling four rebounds. Johnson, the team’s top scorer, struggled to find his shot, but he made amends by hitting three of his last four field goals to score 10 points, pulling down nine rebounds, making three steals and handing out two assists.

“We’re all accustomed to him getting 15-17 points a game,” Absher said. “He scores (only) 10, but then you look at the rest of the line and go: ‘Whoa.’ We tell our guys: Yeah, we want to make shots, but there’s so many ways you can contribute. And I really respect that about Brooks – that he found a way to help us other than just scoring.”

Davie got a big lift from Redmon. After failing to score in the previous three games, the senior turned in a season-high nine by drilling 3 of 4 3-pointers. To put that in perspective, the rest of the team was 0-7 from long range.

“I talked to him when we came back from East Forsyth and tried to instill back in him some confidence to step in there and take those shots,” he said. “Man, he practiced hard Friday and Monday and you felt like it was going to transfer into the game. You talk about toughness. That was toughness at its highest to step in there and make three 3s. Hats off to him. He’s a great kid. He’s a competitor. And I was really, really happy for him to see his work pay off.”

Notes: Smith had four points and four rebounds. King had three points, three steals, three boards and two assists. Summers had three points, two boards, an assist and a steal. Taylor had two points. … Davie only shot 37 percent (19-51), but it offset that by outscoring Reagan 18-7 at the line. … Redmon has two D-II football offers (Mars Hill and UVA Wise). “I think he’ll get other offers,” Absher said.