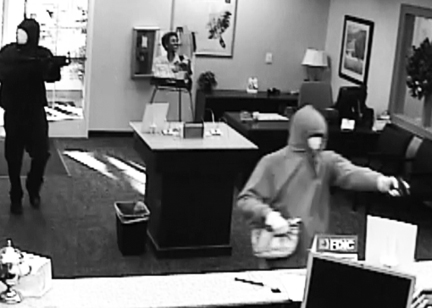 Three people have been arrested in what appears to be a statewide gang robbing banks and other stores.

The arrests came after the BB&T in Bermuda Run was robbed at gunpoint on Wednesday, Jan. 8.

Two men – well disguised – entered the bank at about 3:30 p.m., one armed with a handgun, the other with a sawed-off shotgun. They demanded the clerks collect money from their drawers for a bag, and briefly tried to make employees open the safe. One was too nervous to complete that task, and the suspects fled on foot.

They ran to a vehicle parked outside, with cash flying in the wind, and headed towards I-40. Onlookers got a good description of the vehicle and a license number, which was put on statewide law enforcement radioes within 10 minutes of the suspects leaving the bank, Hartman said.

Also within that 10-minute frame, Alamance County officials called to say the description of suspects and vehicle matched suspects they were looking for in three bank robberies there.

In about an hour, a N.C. Highway Patrol trooper spotted the suspect vehicle on I-40 near Mebane in Alamance County. A chase ensued, traveling through Alamance, Orange, Durham and Granville counties before law enforcement lost contact in Vance County, Hartman said.

Later, one of the suspects, Clifton Harris of Creedmoor, called authorities claiming he had been robbed and his vehicle stolen. That vehicle, the same one believed to have been used in the Bermuda Run robbery, was found a couple of blocks away from Harris, on fire in a field. The car was registered to someone in Carteret County, who authorities believe is involved with the suspects but was not with them that day.

Harris, and Cameron Evans and Stanley Kearney, both of Kitrell, are being charged in Davie County with: armed robbery with a dangerous weapon, assault by pointing a gun and kidnapping. They are facing various charges from other authorities, Hartman said. They have also been linked to bank robberies in Mebane, Raleigh and Greenville.