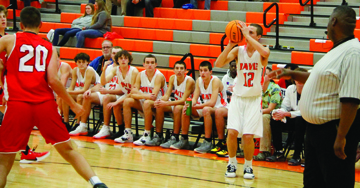 The Davie JV basketball team’s road losses to Reynolds and West Forsyth in the first two Central Piedmont Conference games took a bit of the glow off a winning streak that stretched from Dec. 4-Jan. 3.

The good news for Davie: It was seven points from winning both.

Reynolds snapped the War Eagles’ eight-game winning streak, 58-54, on Jan. 7.  They had a rousing start, with six different guys scoring during a 14-8 burst out of the gate. But they got torched in the middle quarters and faced a 46-34 deficit after the third.

“We came out hot, but very quickly we began to let off the pedal and coast,” coach Ty Woodring said. “We stopped being as sharp as we were at the beginning. The six-point lead at the end of the first quickly turned into a (28-22) deficit at halftime. Whenever they picked up their defensive intensity in the second half, we didn’t respond very well.”

The Demons opened a 17-point lead. Woodring took some solace in that Blake Walser and Davie got back within four. Walser scored 11 of Davie’s 20 points in the fourth, hitting 6 of 8 free throws to finish with 22 points. He has been an absolute mainstay, averaging 17.5 across four games.

The Demons, who dealt Davie its first loss since Nov. 19, improved to 5-3 with their third straight win.

The War Eagles put up a feisty fight before falling a hair short in the closing seconds at West Forsyth on Jan. 10.

Late in the game, Powers rebounded his own miss and scored to tie the game. A Titan was fouled with 15 seconds remaining and hit 1 of 2 free throws for what proved to be the game’s final point. Davie missed two shots in the dying seconds to fall to 8-3 overall.

“It was heartbreaking to lose it that way,” Woodring said. “We missed a lot of free throws. We had a lot of costly turnovers that led to easy points for them.”