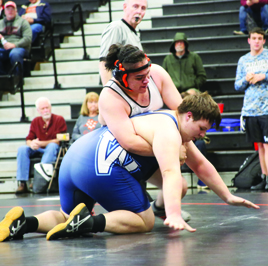 Adam Szewczyk goes for a pin in the 126 weight class.

A week after snatching victory from the jaws of defeat against Northern Guilford, Davie’s wrestling team rose from the ashes against West Wilkes in the championship match of the Blackhawk Duals at West on Dec. 28.

The War Eagles erased a 24-0 deficit and roared in front by six. The latest enormous rally did not pan out, however. West prevailed 40-34.

Despite the loss, coach Perry Long adored the fight from his team of youngsters against a 14-0 opponent.

“One dad said: ‘West Wilkes has nine seniors. They’re going to beat the wheels off us,’” Long said. “Man, we were in the match. We wrestled hard.”

The War Eagles are not the same team that was limping along at 12-10 on Dec. 14. They’re 9-2 since then, locking up the 21st straight 20-win season (retired coach Buddy Lowery bagged the first 20). After going 4-1 at West Wilkes, Davie was 21-12. That’s about as good as anyone could reasonably ask for with so many freshmen and sophomores in the lineup.

“We’re getting better every week,” Long said. “I practice them hard and they wrestle hard. In that room, you’re going to practice hard.”

Everyone received a forfeit from Starmount, which didn’t show up in Millers Creek. Davie whipped Watauga (66-15), Mount Airy (51-27) and Ashe County (53-24) before meeting W. Wilkes.

In that match against Northern Guilford the week before, Davie faced a 34-11 deficit before winning 38-34, a 27-0 run powered by Collin Bailey, Matthew Downey, Isaac Webb, Tyris Griffin and Jack Jarvis.

“It was playing out like (Northern Guilford),” Long said.

“In 2-A, they’re not going to beat Fred T. Foard or (Central Academy of Technology and Arts), but they’re pretty daggone good,” Long said. “They’re in the top three in 2-A.”

With two pins, it was perhaps the biggest day of sophomore Gutierrez’s career. “He’s pretty dadgum good,” Long said. “He’s just between Snyder and Bailey. He can wrestle.”

On Hill: “When he’s on, he is great. He’s fast. He doesn’t panic when he gets in a tight situation. He doesn’t lose his head. In scrambles, he can look like a pretzel and then all of a sudden he’s on top with a takedown.”

On Webb: “At the first of the year, Isaac would get a takedown, get in legs and look for one move. At West Wilkes, he was running other moves out of legs. He was transitioning out of legs and pinning people. He’s opened up his offense and doing more instead of looking for just one move. That’s really helped him when he’s bumped up to 160.”

On Bailey: “He’s really impressed me because I wasn’t with them last year. I kept up with them but I didn’t coach. You can tell that he really worked to where he expects to be at the state competing. His confidence is there. He knows he can beat these guys when he goes out there.”