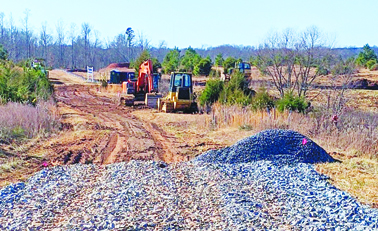 The building is being erected off Angell Knoll Ave., between Yadkinville and Madison roads.

Mocksville is rolling out the red carpet and entering the glitz and glam world of show business.

Special Event Services, an industry leader in audio, lighting, design, staging, and live event production, broke ground this month on a space that will make room for growth, provide greater efficiency, and free up space for one of its affiliated companies.

Located on a 15-acre site at 216 Angell Knoll Ave., the 52,000-square-foot pre-engineered metal building will include conference rooms, offices, and warehouse space. The company plans to move in next November.

Future plans at the site include the addition of a rehearsal facility that will allow artists and productions to practice in a space set up to simulate the venue where they will perform.

The general contractor is Fourth Elm Construction of Kernersville. The project architect is CJMW Architecture, and the engineer is Stimmel Associates, both of Winston Salem.

“This expansion was a long time in coming,” said SES Director of Touring Michael Brammer, Jim’s son, who represents the second generation of the family business. “Over the past few years, we’ve experienced steady growth and needed more space to spread out to build and prep our events.”

“Mocksville provided us the right place at the right time. We found a great piece of land with easy access to I-40,” said Brammer. “It has been great getting to know everyone and working with the Davie County team. Everyone has been welcoming and accommodating throughout the process. We are thrilled to be able to call Davie County home for SES.”

“What an exciting company to have in our community with its built-in star-studded list of customers,” said Terry Bralley, president of the Davie County Economic Development Commission. “Special Event Services offers a tremendous opportunity for our Davie County community to learn and grow from their wealth of knowledge and experience in the entertainment business. In addition, breaking ground at this site opens up new sites for industrial and commercial development.”

The company’s 30,000 square-foot location on Indiana Avenue in Winston Salem will continue to operate as the headquarters for Special Events Transportation (SET) as well as provide long-term storage for clients’ equipment. SET owns a fleet of 110 Volvo trucks used for transporting equipment across the country.

Although there will be a few new hires, Brammer said around 50 employees will move to the new office. He said employees are excited about the move. A couple of them, including Brammer, have moved to Davie County. Company co-founder, Jeff Cranfill, is a long-time resident of Davie.

Jim Brammer’s foray into the entertainment industry began while owning and managing a series of nightclubs around the Winston-Salem area. A chance conversation while producing a benefit concert for veterans at Ernie Shore Field changed the course of his career.  Music legend Charlie Daniels told him he had “a gift at producing shows” and that he should get out of the nightclub business.

SES got its big break in 1994 when it began touring with Hootie and the Blowfish. The Brammers’ commitment to their faith also led them to Joyce Meyer Ministries and later to become the production company for the Billy Graham Evangelistic Association.

SES counts 18 Grammy-Award winning artists among its clients. It worked on 46 tours and more than 850 shows in 2018 that entertained more than 7.25 million attendees. The company is working with 38 clients on tours around the world. The power-packed list includes 3 Doors Down, Avett Brothers, Darius Rucker, Joel Osteen Ministries, and Lynyrd Skynrd.

Special Event Services was nominated for the 2019 Parnelli Award for Sound Company of the year as a result of its partnership with the Luke Combs Tour.

“We’ve been blessed to work with so many incredible clients,” said Brammer. “Dad says he is having just as much fun now as when he started the company more than 30 years ago.”

Special Event Services and its 11 affiliated companies employee around 300 people worldwide and have offices in Winston-Salem, Nashville, New York, San Diego, and Boston. The company plans to expand to Las Vegas, as well. To learn more, visit www.specialeventservices.com.