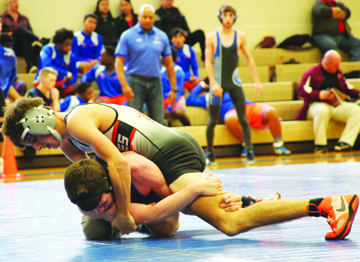 After taking a beating in a tournament at Newton-Conover, Davie’s wrestling team wiped the bad taste out of its mouth in the Wes Lamoureaux Duals at Lexington on Dec. 21.

The War Eagles sent 3-6 at Conover, including four straight defeats. They made amends by going 4-1 and finishing second in the event at Lexington.

The War Eagles pulled off two huge rallies, the first against South Stokes, which took everything from 170-285 to build a 27-0 lead.

Later in the day, the War Eagles caught lightning in a bottle against Northern Guilford, which claimed seven of the first nine matches to establish a commanding 34-11 lead.

“They were expecting to beat us,” coach Perry Long said. “Their coach didn’t think we had a 195-pounder, so he was going to double forfeit at 195. We had to win the toss for him to show (first) at 195, and we did. He didn’t roll anybody out there and I sent Charlie Frye out to get a forfeit (for a 6-0 lead). Then they were scrambling.”

Although Davie caught a break by winning the toss, things looked bleak at 34-11 with only five matches left.

“I said: ‘Mark, we’re going to have to bump up to win this,’” Long told assistant coach Mark McKnight. “I told them we’ve got to pin.”

Tyris Griffin applied more heat with a go-ahead pin at 170. Suddenly, Davie was in front 35-34 with one match to go. Jack Jarvis sealed the deal with a 4-2 decision at 182.

“When we beat them, they were shocked,” Long said. “It was awesome. Jack was winning the whole match. He got a little tired because the weight got to him. He’s been weighing around 166, 167. It’s a big difference between 170 and 182.

“In the next couple of years when we’re wrestling for a state championship, we might need a pin. You’ve got to learn to pin people. It’s not about you then; it’s about all of us. I’m trying to instill that into them.”

Unfortunately, emotional triumph over the Nighthawks drained Davie’s battery for the championship match. Ledford capped its 5-0 day with a 43-30 win over Davie (17-11 overall).

Eight of the 14 weight classes went the Panthers’ way. Davie hung around by getting pins from Lane Hill, Downey and Webb; a technical fall from Szewczyk; a major decision from Bailey; and a decision from Jarvis.

“We spent our energy against Northern Guilford,” he said. “We didn’t get any breaks against Ledford. We had to wrestle really well to win.”

For the day, Downey was masterful at 145/152, going 5-0 with four pins and a forfeit. It was a breakthrough moment for the junior.

“He’s getting better,” Long said. “He’s working. His mind is on track right now. He was struggling with some things early in the season. He’s back clicking now.”

After taking some lumps at Newton-Conover, Webb responded in a big way. His 4-0 showing at 152/160 featured three pins.

“Every day I can see us improving,” Long said.

Davie’s season pin leaders are Hill (14) and Szewczyk (13). Jarvis and Bailey have 12 each; Hire, Downey and Griffin have eight apiece; and Webb has seven.

“Lane is tough,” Long said. “Sometimes his confidence is not there. If he doesn’t know anything about an opponent, he’ll wrestle like he’s an all-American and you’re not going to beat him. Szewczyk will stick you. When he gets on top, he will rip you.”