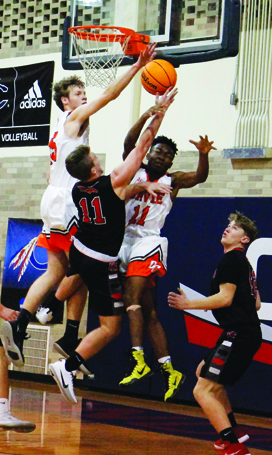 The Brooks Johnson/Iverson King combination ran like a chainsaw in the first round of the Sam Moir Christmas Classic at Catawba College, their 40 points way more than downtrodden South Rowan could handle in a 73-48 drubbing on Dec. 26.

The 2-A Raiders entered as the No. 7 seed and fell to 1-8 with their fifth defeat by 20-plus points. The second-seeded War Eagles, who captured the annual event in 2018, improved to 7-2.

South hung around in the first quarter, but a Johnson assault in the second ignited the wipeout. The senior accounted for 11 of his team’s 21 points as Davie turned a 17-12 lead into a breezy 38-21 halftime margin.

Johnson put on a showcase performance with 24 points, two 3-pointers and 6-of-7 free-throwing shooting. He matched his three-year varsity high in scoring even though he exited  with 5:55 remaining to preserve fuel for the next day’s semifinal.

“It’s different going from role player to leader and scorer, but I’ve enjoyed it,” Johnson, who was the No. 5 scorer for last year’s 24-win team, told the Salisbury Post. “(And) I try to get my teammates involved as much as I can.”

Johnson, who accelerated a torrid stretch in which he’s averaged 21.7 points over four games, has certainly checked every box as an indispensable senior.

“He showed a lot of leadership again,” coach Mike Absher said. “It’s tough the day after Christmas – everybody has been sitting around – but man he brought it early and that gave everybody confidence and energy. It’s amazing (the tear he’s on), and good for him. He’s worked so hard and it’s nice to see his hard work pay off.”

Oh, and there was also this from Johnson: A handful of fine assists.

“He did a great job of distributing the ball,” Absher said. “There were a lot of times he penetrated and he kicked it to guys for open shots. It was very typical Brooks, very unselfish.”

Every Batman needs a Robin, and King raised his profile by coming up with 16 points and a pair of triples. King is a smooth freshman. He scored 12 at West Wilkes in his high school debut, but then he missed two games with injury and struggled to find an offensive rhythm during a five-game span. He was averaging 4.5 for the year before transforming into a confident gunner at Goodman Gym.

Interestingly enough, he’s the first freshman to make Absher’s squad since Michael Walton and Peyton Hampton in 2015-16. He banked the most points by a Davie freshman in five years, dating to Cooper Wall’s 28 in an 81-74 loss at Parkland in 2014-15.

“It’s just part of the process,” Absher said. “He was out with his injury and being a freshman, every day is a new learning experience. He gets more comfortable each game.”

Braden Graham, a 6-0 junior, is South’s heartbeat, but one man can only do so much. He poured in 26 points, drained four 3s and enjoyed his seventh 20-point effort of the season. He even pulled off a four-point play. But it was a distinct mismatch because the next Raider had four points.

“Coach (Bruce) Wallace and I watched film and we knew No. 20 could play,” Absher said. “We did a pretty good job on him for three quarters. He got loose a little bit in the fourth.”