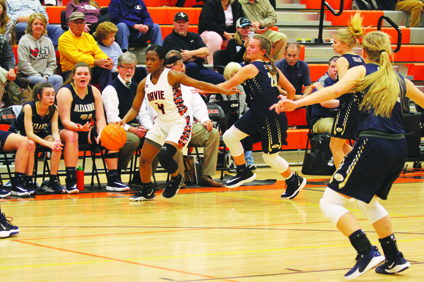 It has been documented a time or two but it’s worth noting again: Davie’s varsity girls basketball team is painfully young. There is one senior and zero juniors.

On top of that, Davie has faced more than its share of powerhouse opponents. In a span of nine days, the War Eagles were up against undefeated West Wilkes, undefeated East Rowan and once-beaten Carson.

Davie ended last week 0-9 and this was not a surprise. But even as the losses pile up, positives can be gleaned from a team with four sophomores and 10 freshmen.

After losing 42-18 to West Wilkes and 66-25 to East Rowan, evidence of improvement was clear in a 69-37 loss to Alexander Central. The War Eagles, who came in averaging 19.5 points, saw a thawing of the icy shield that had covered the Davie basket.

“We gained some confidence (against E. Rowan), and tonight they played like they weren’t scared,” coach Kevin Revels said. “They’re picking up little pieces at a time, and tonight for the first time we saw them have success doing different things offensively. We were doing 5-6 different things and mixing them in. We got a couple baskets on stuff that we work on daily that we hadn’t gotten to work in a game. Everybody on the bench blew up when they saw it.”

After scoring nine points through five games, sophomore Olivia Tatum turned a corner. She had eight against W. Wilkes. She paced her team’s scoring for the second game in a row with 11 against E. Rowan.

“East Rowan was probably the best game (of her two-year varsity career),” Revels said. “She didn’t have as many points (against Alexander Central), but she continued to play at that same level with intensity and effort.”

Freshman Elizabeth Johnson took her freshman game to a new level against Central with 18 points, six rebounds and five steals. She was perfect from the free-throw line (4-4) while putting up the most points since Morgan Lewis’ 22 in a 59-47 win over Reagan on Feb. 15, 2019. It was the most by a Davie freshman since Emma Slabach’s 18 in a 48-33 win over Mooresville on Dec. 30, 2015.

After the Dec. 4 North Iredell game, Revels said: “She’s got a lot of natural ability. In the long run, she’s the type that’s going to become an all-conference player.”

After E. Johnson’s big showing against Central, he said: “She had gone through a slump where she was hesitant. She shook that off tonight.”

As expected, Carson overwhelmed the visiting War Eagles 57-20 on Dec. 19. The Cougars (9-1) average 57.9 points a game and this marked their fifth victory by 30-plus points.

The schedule has been brutal. It will get no easier in the Central Piedmont Conference. Revels’ hope is that the 2019-20 experience will harden the War Eagles like diamonds and things will begin to turn around next season.

There are other positive notes. Revels believes he has a future star in freshman Somer Johnson.

“I think she is going to be a special player,” he said. “She is one of those natural scorers. She understands how to get herself in position to get a shot off. She’s good at maintaining her dribble. She’s the type of player that’s going to be difficult to defend down the road.”

He added that freshman Sydney Dirks “is going to be really good.”