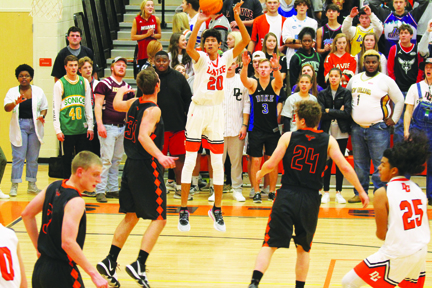 Even with four starters gone from last year, the present is imitating the recent past for the Davie varsity boys basketball team.

The War Eagles won 42 games the past two seasons, including an unprecedented 24 last winter. The 2019-20 club entered the week 5-1, and the lone setback was by two points on the road.

Mike Absher, the 18th-year Davie coach, is obviously pleased, but at the same time he’s as philosophical as ever. It’s reasonable to expect Central Piedmont Conference rivals to make Davie work a bit harder for Ws after Christmas.

But still, it’s been an impressive run for a team that returned one starter (Brooks Johnson). As a sophomore, Johnson was the sixth man for an 18-9 team as he averaged 4.5 points. As became a starter as a junior on the 24-3 CPC championship team and averaged eight, peaking at 15 on three occasions. With Owen McCormack, Michael Walton, Jacob Hendrix and Troy Griggs gone, Johnson has done more than elevate his game.

Last week Johnson scored a career high, matched his career high and then set another career high – all in a span of four days.

“We talked to him the other day about how his role has changed,” Absher said. “Last year he was a role player who didn’t have to carry the load. Now he’s the leader and he’s the guy who needs to score. He’s been our leader on defense, too. He’s been such a warrior.”

After a struggling start, Davie raced to a road win on Dec. 10. The Raiders jumped to an 8-5 lead, during which Davie was 2 of 10 shooting, including 0 for 6 mark from 3-point territory.

The War Eagles turned the game with a 15-2 run in the second quarter. Zach Smith banked in a short turnaround. Za’Haree Maddox bounced a pass to Jaydin Spillman, who scored as he was fouled. From the corner, Spillman fired a pass to a cutting Johnson, who scored in the paint. Maddox scored off a steal as Davie surged to a 20-10 lead.

“We played really well in the second quarter,” Absher said. “Once we get out and get some easy baskets, that makes attacking all these zones we’ve been seeing a whole lot easier.”

Johnson took over in the third. He converted 5 of 6 shots, and all five were assisted by Maddox. “They have good chemistry between them, that’s for sure,” Absher said.

Johnson finished with a varsity career high of 17 to go with three steals and two assists. Smith and James Reid had eight each. Maddox had six. Justice Redmon and Spillman had five. Avery Taylor and Zymere Hudson had four, and Alex Summers three.

“That’s a good stat line,” he said. “He’s the point guard. Seven assists is really good. He was able to get into the teeth of their defense a few times, which led to some easy buckets for us.”

They held a 9-8 lead when the Maddox-fueled run began. Taylor controlled an offensive rebound and assisted a Johnson 3-pointer. Maddox found Iverson King for a triple. Two Maddox steals led to layups for King and Summers. Maddox grabbed a W. Wilkes miss and assisted a layup by Spillman. Then Maddox took a pass from Johnson and buried a 3 to give Davie a 25-13 lead.

The margin swelled to 35-19 by halftime. Absher will take a 35-point half and run with it.

“Offensively that was the best we’ve played,” he said. “We’ve seen a ton of zones and we’re finally starting to attack things better.”

Johnson, who is averaging a team-high 14.4 points, matched his career high of 17 by hitting 7 of 12 field goals and 3 of 6 3-pointers. He added five boards and three assists.

“Brooks doesn’t force stuff, and I think that’s one reason he’s off to such a good start,” Absher said.

At home on Dec. 13, Davie continued to make hay before the Christmas tournament at Catawba and the CPC race.

The War Eagles actually trailed after the first quarter (16-14), but they took fire control in due time.