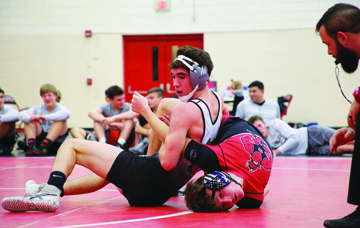 Last week did not go well for Davie’s wrestling team. It absorbed eight losses in a span of three days.

The downward spiral began in a tri-meet at Davie on Dec. 12, when Piedmont and Southeast Guilford defeated Davie 50-25 and 39-38, respectively.

Piedmont, which finished second in the 3-A state in 2017 and won the whole thing in 2018, beat Davie handily. The match against SEG was a virtual coin flip that went the Falcons’ way.

The War Eagles found themselves behind 24-0 and 39-12. They won the last five weight classes; the teams split 14 matches in all. But the Falcons avoided pins where they had to and clinched the verdict in the 12th match.

“We needed some pins late,” coach Perry Long said. “Their kids didn’t stall out. They did what their coach told them to do and stayed off their back.”

“He’s an all-around wrestler,” Long said. “He’s good on his feet and when he’s on top, Collin tries to rip people. He’ll put a little sauce on you.”

Seeing Jarvis and Bailey flourish has not been a shock. Bailey was 37-14 last year; Jarvis went 28-16 and qualified for the state meet. Meanwhile, Snyder has improved immensely since his sophomore year, when he saw little varsity time and went 2-3 at 132. A year later as a junior, he started 10-1 at 132/138.

“Tyler’s tough, man,” Long said. “His technique is good and he’s decent on his feet. You think you’ve got him and then he’ll get out of something in a minute.”