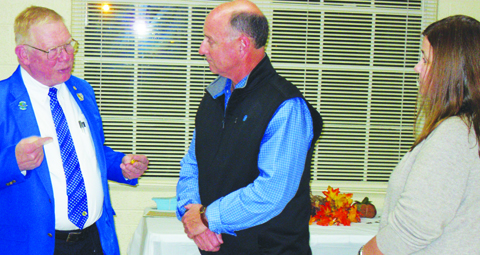 The club was chartered on Oct. 22, 1954 and has been serving the communities of Davie County ever since. North Carolina District 31-I governor, Judge Jimmy Myers, was the guest speaker. Myers is also a member of the Mocksville Lions Club and is the first NC State Lions District Governor to be  selected from the Mocksville club.

Crenshaw spoke regarding the long history of the Mocksville Lions Club and recognized two lifetime members in attendance – Dr. George Kimberly and Joe White. One original 1954 charter member survives – H.R. Hendricks, longtime supporter of many causes both in the Lions and Davie County alike. Many years of historical memorabilia were on display including the 1954 Club Charter.

The Mocksville Lions Club is part of Lion Clubs International which is the largest service club organization in the world. There are more than 1.4 million members in more than 46,000 clubs worldwide.

To learn more, attend a meeting. The club meets once per month on the third Thursday at 6:30 p.m. in the fellowship hall behind the First United Methodist Church on Church Street in Mocksville.Call 336-751-5172 for more details about becoming a Lion.