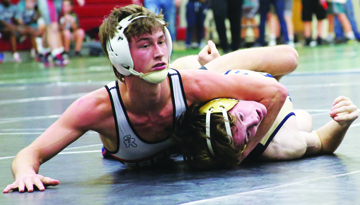 Tyler Snyder, a junior at 132, is 7-1 with five pins for Davie’s varsity wrestling team. - Photo by Ashley Bowden

Davie’s young wrestling team is hoping for some residual magic in 2019-20. With Davie leading Mallard Creek by four and Matthew Downey dictating terms in the second-to-last weight class, the outcome was going to be vintage Davie wrestling.

But Downey was disqualified, Davie wound up losing and coach Perry Long was fuming over the call that turned a sure Downey win into a controversial loss.

Three days earlier in the Husky Invitational at Hough, the War Eagles finished fourth out of 14 teams. Hough captured the event with 158 points, followed by Newton-Conover (129.5), Hickory Ridge (125.5) and Davie (123.5).

Davie’s third match was against Mallard Creek. It was a back-and-forth struggle that saw each team win seven weight classes. The Mavericks’ 5-2 advantage in six-point victories was the difference in their 35-28 win over Davie.

“They thought they were going to dominate us,” said Long, who used 13 freshmen, eight sophomores, three juniors and zero seniors in the event.

“(Webb’s opponent, Alex Cowart,) is a senior,” Long said. “He had 28 wins last year and they felt like he could beat Isaac. But Isaac wore him out.”

“I told Lawson he’s not getting pinned,” he said. “He wrestled as hard as he could and he wrestled a stud. I told him that’s just like a win. He wrestled his tail off.”

“I felt like Lane could beat (Daniel DeJesus), but I didn’t think he could pin him,” Long said. “Adam was down (against Dorian McNeil) and needed a takedown to tie it. He got a takedown with 20 seconds left. Then he pulled out a tilt and got back points to win it. Adam wrestled a stud, too. (Snyder’s opponent, Wesley Chappell,) runs a lot of cradles. I told Tyler you can’t get caught in a cradle. Tyler wrestled well.”

The War Eagles were one win from clinching, Downey was tying Brian Lyncook in knots and Long was feeling marvelous.

“I was so excited about how we wrestled,” he said. “We wrestled out of our minds against Mallard Creek. We wrestled hard from the very beginning. It was a heck of a match.”

Then, out of nowhere, Downey was disqualified for unnecessary roughness. Instead of a 31-24 or greater lead for Davie with one weight class to go, Mallard Creek had a 30-28 lead.

“We had it won,” a seething Long said. “Downey was up 9-2 (in the second period). (Lyncook) bellied down, got on his knees and tried to crawl from him. So Downey pulled him a little bit and jumped on him. The ref DQ’d him. He said he jumped on him. I watched the video. I have no idea (what was illegal). He said he was dragging him across the mat with one leg. We were going to win the match. Downey had him on his back three times. I held my hand up, went to the scorer’s table and said: ‘What was the problem?’ He said he jerked him around the mat.”

Mayhem ensued. Before the referee could raise Lyncook’s hand to make the victory official, Lyncook charged up the bleachers.

“A fight broke out in the bleachers,” Long said. “(Lyncook) left the mat and the official never raised his hand. That should be an ejection. (The ref) only took one team point.”

And then: “I wrote a letter to the state, showed them the video and appealed the ejection. Downey did nothing to warrant an ejection.”

Ethan Chenault pinned at 152 to lock up Mallard Creek’s victory.

“This young team I’ve got gave up two forfeits and was still in the match to win it,” Long said.