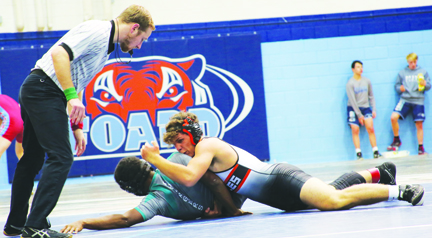 There was a lot of hand-wringing going into the Davie wrestling team’s season opener at Foard on Nov. 20. Some guys were missing from the football team, the rebuilding War Eagles unveiled a lineup of four freshmen, seven sophomores, two juniors and one senior, and the day marked the first since February 1976 without Buddy Lowery as head coach.

There were a lot of happy faces when Davie wrapped up a 2-0 start. The wins were 51-24 over Cox Mill and 45-34 over North Iredell – as good an outcome as Davie assistant coach Mark McKnight could have envisioned considering half the lineup (seven) were making their varsity debuts. McKnight and Charles Compton handled the coaching duties for new head coach Perry Long, who couldn’t be there because of his obligations as an assistant coach in football.

“I was a little nervous going in,” McKnight said. “We don’t have a 195 or 220 right now. So it’s a little nerve-wracking when you know you’re absolutely giving up one forfeit no matter what and you have to bump people to (avoiding giving up two forfeits).”

After jumping on North Iredell 12-0, the War Eagles found themselves behind 18-12. They stormed back with a 33-4 run. After Kevin Morgan received a forfeit, Lane Hill, Adam Szewczyk and Ramiro Gutierrez strung together pins. Tyler Snyder decisioned and Collin Bailey pinned to finish the Davie flurry.

“Charlie weighed in at 182,” McKnight said. “He did his job well. I was very proud of him.

“Adam looked good. He’s very consistent. He does the same things when he gets in a groove. He knows what he likes to do – he loves the chicken wing – and he’s tough to beat when he’s on his game.

“The two guys Collin had he handled very easily. That doesn’t  mean they’re not good wrestlers. It means Collin is a really good wrestler.”

“Hill did great,” McKnight said. “I was wondering because he had to cut weight a good bit to get to 120. He was a great surprise.

“Snyder looked really good in both. When I bumped him to 138 against North Iredell, the guy he wrestled is very good. I mean he had a great record last year. He’s tough. So I bumped Tyler up and he did his job. He frustrated that guy. I couldn’t ask for more than (a 5-0 decision).”

Although freshman Lawson Hire went 0-2 at 113, his staying power was admirable as he lost by decision and major decision.

“The kid from Cox Mill is a senior that barely missed making the states last year,” McKnight said. “The kid from North Iredell beat Cody Taylor (who was 43-6 as a senior last year). It was good for him not to get pinned in both of those. If he gives up six against North, the match could have gone totally different. He did his job. He stayed off his back and didn’t get pinned. Those two guys have way more experience than him. So I was very proud of him.”