Davie collapses in second half 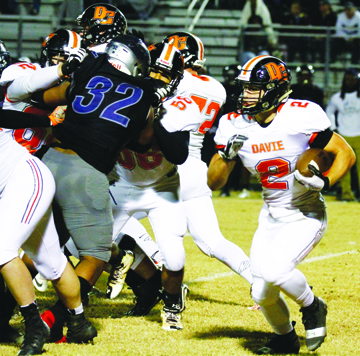 KERNERSVILLE – At halftime of the second-round 4A West football game at East Forsyth on Friday, Davie and its fans had reason to believe.

Running back Tate Carney was gashing East on the ground, running 17 times for 85 yards and converting seven of Davie’s 16 first downs. He had two touchdowns, giving him seven in a span of six quarters against East. Quarterback Nate Hampton was in a nice run/pass rhythm, plowing for 54 rushing yards and hitting 11 of 15 passes for 91 yards. With the score 14-14, the War Eagles were right there.

And then they weren’t.

Everything fell apart in the second half as second-seeded East knocked out No. 7 Davie 49-21. The defending 4A champion improved to 10-2, while Davie finished 7-6.

When the conference rivals met in Kernersville on Nov. 1, it was 14-14 before East blitzed Davie with 21 unanswered points on the way to 49-35 victory. The playoff matchup was deja vu all over again for the War Eagles, who gave up 28 straight points after the 14-14 deadlock.

“East is a phenomenal team,” Davie coach Tim Devericks said. “The quarterback is a tough tackle as well. When we had success, we were having gang tackling. But they are very tough to get on the ground.”

Davie’s defensive struggles were compounded by Lyles’ big-play ability in the air: 8 of 12 for 250 yards. He averaged a whopping 31.2 yards a completion while connecting with Jamison Warren (5-158) and Brendan Conway (2-82).

“The reason they got some of those pass plays was because we were trying to load the box,” Devericks said. “(Running the ball is) who East Forsyth is and they’re good at it. That’s what we game planned to stop, which left us a little susceptible in the passing game at times.”

Davie developed good vibes in the first half. East’s kicker pushed a 32-yard field goal to the right, and that was followed by Davie’s 13-play, 80-yard drive. On third-and-9, Carney ran for 11 yards. On third-and-8, a Hampton draw play went for 15. Carney scored from 13 yards out as Davie grabbed a 7-0 lead.

East did not flinch, however. Lyles’ 64-yard keeper to the Davie 8 marked the longest run against Davie all year, and Lyles scored from the 2 on third-and-goal. The extra point failed to keep Davie ahead 7-6.

Davie drove from its 10 to the East 34 without facing third down, but Hampton’s screen pass was intercepted by East linebacker Javon Cobbs. The turnover did not hurt Davie because its defense stood tall at the goal line. On fourth-and-1 from the 2, the defensive line devoured Lyles.

“It was interior pressure and making (Lyles) find a secondary gap,” Devericks said. “By that time, the effort of the defense was to him.”

Lyles fumbled on second-and-goal from the 6, but he got a friendly bounce and regained possession. On third down, he rolled out and hit Warren for a touchdown. A two-point pass to Conway gave East a 14-7 lead.

Davie delivered a counterpunch by marching 73 yards. The spark was Zymere Hudson’s 30-yard reception. On third-and-7, Hampton scrambled, threw a powerful stiff arm and gained 17 yards to the East 10. Carney covered that distance in two plays as Davie tied it at 14 with :48 left in the half.

“Our kids were right there,” Devericks said. “They knew they could play with them.”

But the third quarter saw a nightmare collapse on both sides of the ball. A second-and-14 pass looked as if it was going to result in a first down but nothing more. Alas, Conway kept his footing after absorbing a hit and motored 74 yards to the Davie 1 to set up a Chaplin TD.

Hampton was sacked 12 yards back and Davie punted. Trevor Richardson’s second minus-4 tackle of the third was followed by Warren’s 48-yard catch on a deep post route. When Traylon Ingram scored from the 2, it was 28-14. When the War Eagles ran four plays and punted, they were circling the drain.

The East onslaught continued as it cruised 75 yards in nine plays. With 1:07 left in the third, Davie was hopelessly behind 35-14.

“Against a good team like East Forsyth, one play can get them rolling,” Devericks said of Conway’s 74-yard catch-and-run. “We definitely didn’t get the start we needed in the third quarter like we got in the first half.”

Two of Beaven Arey’s four punts were in fourth-and-1 situations when the game was tight in the first half. On third-and-9 on Davie’s first possession, Hampton escaped the pocket to pick up 8 yards to the Davie 39. Devericks decided to punt and his defense got a stop as safety Caleb Bowling denied a third-down pass in the end zone and Andrew Conrad missed the field goal. On a third-and-3 play in the second quarter, Carney gained 2 to the Davie 43. Arey punted and East drove for the 14-7 lead.

“I’m not going to chase in the first half, even though it was to the dismay of some people on the sideline,” Devericks said. “It’s a (0-0 and 7-7) game and I don’t want to give them a tack-on (score) and kill what we had built.”

Although it wasn’t nearly enough, Davie finished with 27 first downs and 444 yards. Carney had 99 yards rushing, but only four carries for 14 after halftime. DeVonte Lyerly turned three carries into 84 yards, including a 65-yard TD sprint with four minutes left (Davie’s longest run of the year). Hampton went 21 of 36 for 208 yards. The most effective receiver was Hudson (5-84).

“I think we had a very successful season,” he said. “We stuck together and that’s what I thanked the seniors for – keeping the unity and building a foundation. There’s a lot more (than 18) who came in their freshman year, and to see those 18 guys stick with it and keep fighting when things looked bleak, I’m super proud of them for that. I don’t know how many workouts those guys missed. There were a lot of guys that don’t get a lot of time on the field, but they didn’t miss a thing. They were there, they were encouraging and that’s what this program is about. It’s really a great group of young men, and it was a privilege to coach them.”

The 2019 season will be remembered for the dramatic turnaround and a fabulous offense that tied for fourth in the history books with a 35.1 scoring average.

Hampton, Carney and Reynolds etched their names firmly in the record book as Davie piled up 63 TDs and 457 points.

Hampton shattered the record for completions with 263; Chris Reynolds is now second with 207. Hampton took over first in passing yards with 3,295; Garrett Benge is now second with 3,071. Hampton threw 22 TD passes, good for fifth behind Benge (34), Reynolds (29), Reynolds (28) and Brad Corriher (23). Hampton’s ninth 200-yard passing game of the year set a record; Benge and Reynolds each had eight.

Carney tied Cooter Arnold for second with 26 TDs. Arnold holds the record with 30. Carney’s 1,257 rushing yards are good for ninth on the single-season list.

How about this: Lyerly is second with an 8.7 yards-per-carry average. (You must average at least five carries per game to qualify. Lyerly needed 65 carries and had 83.) The standard is Arnold’s 8.9 average from 2004. Carney’s 6.5 clip is tied for 12th.

And Guillermo “Willy” Moure tied for first with 49 extra points. David Stein and Michael Rowe also had 49 in a season.

Huge credit to the offensive line for leading the way to those terrific numbers.

Hampton, Reynolds and Moure are juniors. Carney, Maddox and Lyerly are sophomores. O-linemen Camden Beck and Spencer Williams are sophomores. Hudson is a sophomore receiver who averaged 15.7 yards on 22 catches.  The top three tacklers – Bowling, Kristian Lyons and Gage Recktenwald – are juniors. Five of the top six tacklers, including Trevor Richardson and Avery Taylor, are juniors.

In other words, there will be frenzied anticipation for the 2020 season. “I told the sophomores and juniors that these seniors have laid some foundation for us,” Devericks said. “Let’s continue it on.”