Davie runs past W. Meck in round 1 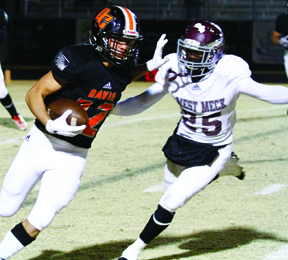 The first half certainly didn’t go as Davie’s football team expected it would, but in the end, the War Eagles were able to dispose of West Mecklenburg rather comfortably, 46-14.

The first-round game in the 4A West bracket was held at Davie on Friday. The 10th-seeded Hawks, who notched their fourth straight winning season, finished 6-5. The No. 7 War Eagles (7-5) clinched their second winning season in seven years in the post-Doug Illing era and enjoyed their first playoff win in three years.

“The atmosphere (during practice) was crazy – nothing like regular season – and I’m glad we were ready to play,” junior defensive back Justus Tatum said.

“We talked to the kids all week about it’s a privilege to play in the cold,” coach Tim Devericks said. “It’s another first at the new Davie High, so that was great to accomplish. Credit to our seniors for buying in to what we asked them to do and really working. They’ve come together and they’re great teammates.”

Before the first-ever meeting with West Meck, an average night for quarterback Nate Hampton was 21 of 34 for 262 yards. In the first playoff game at the three-year-old school, his passing numbers were not drop-dead gorgeous like they were in wins over West Forsyth and Reagan. It mattered not. The rushing attack picked up the slack.

Tate Carney ran for 130 yards. Nothing new there; it was his seventh 100-yard rushing game. Hampton plowed for his highest rushing total (85) in two varsity years; his previous high was 72 at West Forsyth. DeVonte Lyerly (5-83) and Josh Robinson (one run, 53 yards) helped Davie pile up 351 yards on the ground and 24 first downs.

“Again, the hogs up front did an excellent job all night,” Devericks said.

Four Carney runs resulted in 59 yards. Hampton scored on a 13-yard keeper to put Davie on the board less than three minutes in.

“That was something he wanted to add to his repertoire,” Devericks said of Hampton’s 14 carries for 85 yards. “He understands the game and knows that teams are going to load the box or load in coverage and not account for the quarterback running.”

Davie’s offense rolled on its second series. Zymere Hudson had a 21-yard reception on third down. Carney had a 16-yard run and 20-yard reception. Willy Moure hit a 26-yard field goal to give Davie a 10-0 lead, making the junior kicker 6 of 8 on the year. At this point, with nearly five minutes left in the first quarter, Carney already had 90 rushing yards.

The rest of the half, though, was lackluster for Davie’s offense. A turnover on downs – a fourth-and-1 pass was dropped – was followed by back-to-back punts.

Meanwhile, West Meck got back in the game with a one-dimensional attack. The one weapon was the beastly Taylor, who did everything. During West’s 10-play, 63-yard scoring drive, he had rushing, passing and receiving yards, and he scored from 9 yards out on a direct snap. The PAT failed as Davie led 10-6 late in the first.

The Hawks took momentum to the locker room when they got a goal-line stop in the final seconds of the half. West penalties pushed the ball to the West 2 with time for one more play. Devericks waved off Moure and called for the Wildcat package. Carney, though, was dropped for a loss with zeroes on the clock.

“It was mostly us (not executing) in the first half,” Devericks said. “Our (typical) level of execution was not there. Give some credit to them. They were trying to hound us at times, and we’ve got to be able to handle that.”

But Taylor didn’t have much help and Davie ultimately left the outclassed Hawks in the dust. On the first play of the third quarter, Hampton lofted a seam pass to Hudson, who broke a tackle at the West 32 and zigzagged for a 58-yard gain. Two plays later, Jack Reynolds made a sliding catch in the end zone for a 20-yard score.

“They were playing tight coverage on one side of zero man, and the other side was loose,” Devericks said of Hudson’s big play. “We talked at halftime about Zymere giving them a good stem, get his hips to turn and he could break it through the middle.”

Recktenwald’s interception at the West 36 set the stage for three Carney runs for 13 yards and a touchdown that broke West’s will at 24-6.

“We talk to Gage all the time about his pass drops and getting past the five-yard depth,” Devericks said. “Once he realizes he can get some depth with his athletic ability, the ball kind of found him there.”

Paul Pollard and Zach Smith sacked Kenney on consecutive plays to force a punt attempt from the end zone. The snap was low, which allowed the rush to swallow up the punter. Ben Norman hit the punter like a Mack truck. A Hawk kicked the ball out of the end zone, resulting in a safety and triggering 22 points in 6:24.

The floodgates were open. Moments after Norman’s blocked punt, Maddox went up for a 29-yard TD catch.

“It was a chance for Za’Haree to use his God-given athletic ability,” Devericks said.

Jadon Davis, who was called up from JV, got Davie’s third sack in six plays. After a punt, Lyerly ran as if he was shot out of a cannon on a 47-yard TD. On Davie’s next offensive play, Robinson was hitting his head on the goal post, the 53-yard TD representing Davie’s longest run of the year.

When Lyerly showed off his blinding speed and Robinson bounced off would-be tacklers, they were operating behind two starters and three backups on the offensive line. Zymier Lewis, Ethan Doub and Merritt Killian had replaced Camden Beck, Tanner Batten and Stuie Marshall in the fourth quarter. Jared Simpson and Spencer Williams were at the their usual spots at center and right tackle, respectively.

For the game, Davie averaged 8.7 yards per carry. The 351 rushing yards were 164 above Davie’s average.

“Again, that just shows what a great job the offensive line did – when you can put other people in there and get the same result,” Devericks said.