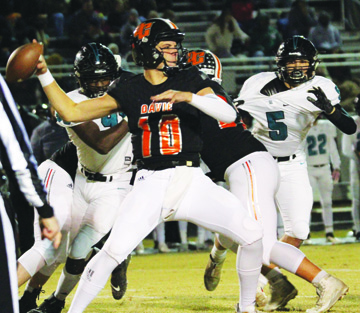 Junior Nate Hampton passed for 402 yards, ran for a TD and threw a TD in a thrilling 49-42 win. - Photos by Mark Floyd

After staring at the possibility of tumbling from first place on Oct. 18 to fifth place on Nov. 8, Davie’s football team recaptured its magic at the 11th hour and pulled out an outrageous shootout against visiting Reagan, 49-42, last Friday on Senior Night.

The highs and lows from the regular-season finale mirrored Davie’s wildly entertaining season. The War Eagles jumped to a 20-7 lead before trailing 42-34 with a little over three minutes left. With their backs against the wall, they scored two touchdowns in a span of 2:39 to nail down a share of second place in the high-profile Central Piedmont Conference.

Talk about a tremendous way to respond to losses to Glenn and East Forsyth. Talk about a gutsy effort on a night when Davie committed 16 penalties for 198 yards. (Reagan had its own penalty problems: 13-118.)

“I’m pumped up,” senior receiver Evan Little said. “It’s great to have this win on Senior Night. I’ve had a great four years and this is a good way to celebrate Senior Night.”

Reagan’s offense scored TDs on its first five possessions of the second half behind 6-3, 210-pound senior quarterback Gabriel Hollingsworth, who rushed for 107 yards and passed for 235 as he averaged 8.2 yards per carry and 19.5 yards per completion. It put up 25 first downs and 542 yards.

Junior quarterback Nate Hampton delivered strike after strike while going 31 of 40 for 402 yards, including the game-winning TD with time running out.

Do-everything sophomore Tate Carney rushed for 141 yards and scored five TDs, giving him a mind-boggling 10 scores in two weeks. He also had eight receptions for 72 yards. A week after posting 266 rushing/receiving yards at East Forsyth, he dropped 213 yards on Reagan.

How about sophomore receiver Za’Haree Maddox. After only having 73 receiving yards across four games, he turned in a star-making performance with eight catches for 173 yards – not to mention a critical two-point, game-tying catch with 3:02 to go.

Little and Zymere Hudson combined for six receptions as Davie racked up 33 first downs and 609 yards.

“I feel like we played like we did against West (Forsyth in a 37-34 win), and that’s how we’ve got to play the rest of the season,” Little said.

Reagan took the opening kickoff and moved  54 yards on six running plays to take a quick 7-0 lead. Davie responded right away. On its first play from scrimmage, Reagan failed to cover Maddox, who was waving his arms before the snap. Hampton saw him running free and the result was a 60-yard play to the Reagan 16. Carney finished the drive from 6 yards out as Davie tied it at 7.

The War Eagles scored on their first three series. On fourth-and-goal from the 1, Carney punched it in from the Wildcat formation. A high snap on the PAT left the Davie lead at 13-7.

Davie’s defense came up with a big stop early in the second quarter. Kristian Lyons made a tackle in space to set up fourth-and-4 at the Davie 15. Hollingsworth went to the end zone to Bryson Canty, but he was denied by Justice Redmon’s blanket coverage.

Redmon, a senior who leads Davie with four interceptions, came through with three pass breakups on the night.

“Justice is the type of player – whether it’s football or basketball – when he has confidence, he’s an elite performer,” Devericks said. “When he’s kind of thinking, sometimes he doubts what God has given him. What He has given him is very special.”

On the ensuing possession, Davie overcame a 12-yard sack when Maddox reeled in a spectacular 45-yard catch. After DeVonte Lyerly ran 11 yards to the Reagan 2, Devericks summoned the Wildcat. Carney walked in around right end as Davie took the 20-7 lead.

Then Avery Taylor, a junior defensive lineman, created havoc in the backfield on back-to-back plays to force a punt. First he fired off the left end to knock the ball loose from Hollingsworth. Reagan recovered but lost six yards. Then Taylor came off the right edge to hit Hollingsworth and cause an incompletion.

“Avery has been growing all season, and you can see his contributions increasing,” Devericks said. “He made tremendous plays.”

“He’s a dog out there,” Reynolds said. “He stepped up big tonight.”

Davie marched from its 20 to the Reagan 8. After a sack made it second-and-20, Hampton found Reynolds for 18 yards. Carney followed with a 12-yard run. When Maddox made a 15-yard catch, Hampton was 10 for 10 for 203 yards. On fourth-and-1, Devericks called for the field goal unit. Willy Moure was 5 for 6 on the year before his 25-yarder banged off the right upright. That was the only first-half possession in which Davie did not score, and it was 20-7 at halftime.

Penalties killed the War Eagles’ opening possession in the second half. Four flags cost them 58 yards and Beaven Arey had to punt.

The game turned in the blink of an eye. Hollingsworth threw short to track star Tazhae Woods, who sped 89 yards to the end zone to cut the margin to 20-14.

“I had to call a little meeting,” Devericks said of the flurry of flags. “I said: ‘Guys, you can’t control that. You’ve got to just keep playing the next play.’”

Hampton and Maddox hooked up for 13 yards on third-and-9 and Carney broke three tackles during a 23-yard TD run that made it 27-14.

The offensive wheels kept on turning. Shavon Revel’s 40-yard reception set up Hollingsworth’s 8-yard TD keeper for Reagan. On third-and-11, Hampton escaped trouble and found Reynolds for 19 yards. Reynolds barely got his toes down for a 13-yard catch. Taking the Wildcat snap from the Reagan 1, Carney leaped over the pile and reached the ball out to give Davie a 34-21 lead.

“He got called for (hurdling) last week at East,” Devericks said. “He came over and said: ‘Am I allowed to jump over the goal line?’ I checked on that, so the next series he knew he was able to do it.”

“I’ve been trying to work on that one,” Carney said. “I saw they were coming. I thought it would work, so I tried it out.”

Davie would not land another counterpunch for a while, and the Raiders would score 21 unanswered. Canty raced 57 yards on his first carry of the game, and he scored from the 4 on the next play. Facing a blitz, Hampton forced a throw that was behind Little. Jon Gullette made a game-changing interception at the Reagan 47. A Hollingsworth keeper converted fourth-and-1. On third-and-goal from the 3, Hollingsworth went under center for the first time all night, and Woods scored on a sneaky run around right end to give Reagan a 35-34 lead.

Hampton was sacked on back-to-back plays, Arey punted and Reagan was in the end zone again in less than two minutes. Daniel Moyer, who only managed 28 yards on his first 12 carries, got loose for 30 yards. Canty took care of the final 12 yards.

“(Hollingsworth) is a special player, and then when you pair him with (Moyer) and (Woods) on the outside with elite track speed, they’re a very tough combination to defend,” Devericks said.

Little doesn’t have flashy stats. All he does is move the sticks when the pressure is suffocating, his 12-yarder on first down sparking a fearless 65-yard drive. Three plays later, on third-and-4, Hampton scored in unlikely fashion – on a 37-yard run straight up the gut. His longest run in two varsity seasons before that was 25 yards.

“It’s probably the fastest I ever ran in my life,” Hampton said. “I have the option to (run or pass). I saw the ‘backer come off the edge, and I knew it was going to be open in the middle.”

“It was actually a pass play, but Nate saw the only guy that was left to come up the middle went to the outside to blitz off the edge,” Devericks said. “And he was worried he was going to get in trouble. He came over and said: ‘Coach, he went to the outside.’”

The celebration was tempered because Davie needed the two-point conversion. Hampton threw a strike to Maddox, who made the game-tying catch on a slant route.

A Davie defense that had been bludgeoned basically all night bowed up when it counted most. Hollingsworth threw incomplete on second and third down, and with 1:30 left, Reagan punted for the first time since the second quarter.

Davie calmly drove 75 yards in five plays. Hampton hit Hudson for 6 yards. After Carney churned for 13, Hampton connected with Maddox for 8 and Carney for 22 before throwing the tiebreaker to the ultra-reliable Reynolds.

The game-winning play was a switch route; Little moved inside to the slot and Reynolds split wide to Little’s left. Reynolds made nifty moves inside the 10 to finish the 26-yard scoring play at :23.

“That was the first time we ran that tonight,” Hampton said. “They were struggling a little bit on the switch concepts and Jack made a heck of a catch.”

“They were having trouble with our switches all night, and that’s a great play call to come up with in the fourth quarter,” Reynolds said. “Me and Evan do an X route. He goes to the corner of the end zone and I come off his hip. If you’re playing man coverage right there, it’s tough to defend. It’s an awesome feeling. You can’t explain it. I’m feeling great for the seniors.”

The game-winning drive was vintage Hampton: 4 for 4 for 62 yards in a span of 60 seconds. He matched his own record for completions (31), and now he holds the second (411), third (402) and fourth (388) spots for passing yards in a game behind Chris Reynolds’ 413. Holding the ball too long on a couple sacks and the one pick were his only blemishes in an otherwise brilliant showing.

“Nate is so cerebral he knows when he messes up,” Devericks said. “He’ll come over and tell us what he did wrong before we even have to say anything to him. That is a huge benefit that he’s seeing the same things that we’re seeing.”

Hollingsworth’s Hail Mary from the Davie 48 fell incomplete with zeroes on the clock, but Davie was flagged for pass interference, giving Reagan one last untimed play. Redmon caught the next Hail Mary out of bounds in the back of the end zone.

The War Eagles collapsed in the second half but rose up. The second momentous CPC win in four weeks erased a lot.

“I’m super proud of them,” Devericks said. “It seemed like sometimes the chips were stacked against us, but they kept battling and battling and believing. I love these guys to death.”