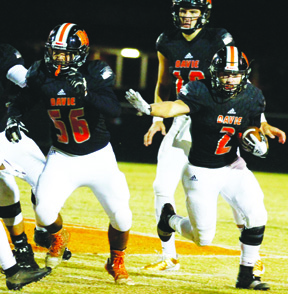 Tate has stomped out 1,028 yards on 150 carries. He has scored a mind-blowing 10 TDs in two games. But it’s his versatility that has made him legendary as a sophomore. He has 50 catches for 671 yards. That he could eclipse 1,000 rushing yards and haul in the ninth-most catches in a season is simply remarkable.

Whenever Tate is asked about his stats, he invariably spreads the credit to his offensive linemen (seniors Tanner Batten, Jared Simpson and Stuie Marshall and sophomores Spencer Williams and Camden Beck).

“Well, most of (the 10 TDs against E. Forsyth and Reagan) have been short yardage and our OL has just moved,” he said. “They’ve moved everybody out there and it was easy holes. It’s nothing about me, it’s all credit to the OL.”

Cade’s exploits at Shady Grove, Ellis, Davie and Davidson Day, and then at Wake Forest, where he is a senior running back, set an extremely high bar for Tate. He obviously hasn’t disappointed.

“(Cade) always tries to take the pressure off,” Tate said. “He’s always saying just keep doing your thing and that we’re two different people. And that’s true. We play two different ways. He’s just been a great influence on everything.”

Devericks heaped more praise on the OL. “I think it started up front,” he said. “We were able to open some holes in the running game. They adjusted and weren’t going to let us run it any more, and then we were able to solve zero man pressure. When they were bringing everyone they had, we were able to give Nate (Hampton) just enough time to get passes off. And the receivers were making contested catches. It was a total team effort.”

Hampton, Carney and Jack Reynolds are firmly etched in the season and career record books even though each has at least one year remaining.

You have to admire Josh Robinson for moving from running back to defensive end. He was the No. 1 running back as a sophomore and junior. This year he missed four games with a knee injury. By the time he returned, DeVonte Lyerly had emerged and the backfield was crowded. With Ivan Poag sidelined by injury on defense, Robinson made an unselfish move.

“He’s an elite competitor,” Devericks said. “All that kid wants to do is win. He bought into the team. He saw injuries develop. We said: ‘You want to give this a try?’ He didn’t even think twice about it, and he’s making plays and causing havoc.”

It was 38 degrees at kickoff. The temperature dipped to 33 before game’s end.

When the three-hour slugfest ended, there were equal parts joy and relief. From 1956-2018, the War Eagles were 73-0 when scoring 40 points. They suffered a nasty 43-40 loss to Kannapolis in September. They nearly suffered similar fate against Reagan. Hampton’s first TD pass in 12 quarters enabled Davie, a 14-point underdog to Reagan, to achieve a four-win improvement over 2018.