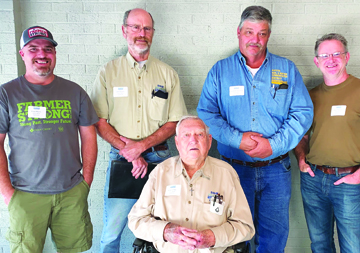 Jones was born in Virginia, but has spent most of his life in the Advance community. He and wife Pat have been married for 66 years and are parents of three children, four grandchildren and one great-grandchild.

Jones has been a district supervisor since 1969, serving as chair from 1978-2008. Through his leadership, the Davie SWCD has been recognized several times for getting conservation on the ground.  It received first place in North Carolina in the Goodyear Conservation Awards Program in 1970 and 1980. In 1987, the district was recognized by the Take Pride in America Awards Program at the state and national level for “Meritorious Stewardship of Americas Natural and Cultural Resources.”

In 1970, Jones was appointed the chair of the District’s Conservation Education committee. The poster and essay contests were begun that year in the schools, followed by the public speaking contest in 1974. These contests have been held every year since.

In 1971, Jones was chosen to represent the board of supervisors in assisting the Davie County Planning Board in adopting a land use plan. A result of this was a county wide zoning being adopted in 1972 making Davie County one of the first rural agricultural counties in the state to have zoning protections. This has helped the county keep a viable agricultural land base.

Jones has been active since 1977 in the Water Resources Committee of the NC Association of Soil and Water Conservation Districts, serving first as vice chair and then as chair.  For many years, Jones carried the concern from North Carolina that federal help was needed for rehabilitation of older Public Law 566 watershed structures.  This became a reality with Congress taking action to authorize assistance. He was appointed in 1977 as the contracting officer for the adoption and completion of the Dutchman Creek Watershed Project, which consists of nine floodwater retarding structures in the county and more than 40 miles of stream channel improvements. For his efforts, Jones received the state association’s “Watershed Person of The Year” award in 1993.

Only until recently, Jones was actively involved with the annual operation and maintenance inspections of the watershed structures.

In 2004, he was inducted into the N.C. Association of Soil and Water Conservation Districts Hall of Fame.  Jones and his wife have faithfully attended regional and national soil and water conservation meetings, where he represented North Carolina on the water resources committees. In 2010, Jones was inducted into the NACD Southeast Region Hall of Fame.

He has been committed to soil and water conservation and natural resources for more than 50 years.