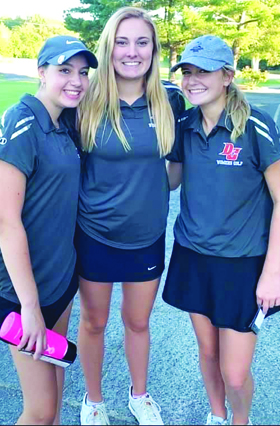 Davie’s Kyleigh Harnsberger added to her portfolio in the Central Piedmont Conference Tournament at Maple Chase Golf and Country Club on Oct. 14.

The junior shot 2-under 71 to take third place. You read that right: She shot the greatest 18-hole score in Davie girls golf’s 18-year history. The hold record was Gabby Chaloupkova’s 3-over 75 at Pinehurst No. 2 in 2010. Harnsberger already owns the finest nine-hole round in program annals (3-under 34 at Maple Chase in 2018).

Harnsberger’s previous best showing on 18 holes came at Mooresville Golf Club in 2018, when she carded 10-over 80. She racked up six birdies in the CPC Tournament. Coach Bob Donley said her putter was a sight to see all day.

“Her short game was spot on,” he said. “She was all over the flag. She made six birdies and looked at four more that lipped out. I mean two of them horseshoed and came back at her. So she was really on fire. I’m talking about one more turn of the ball or a half a width difference in the line, she’s 4 or 5 under. You can tell when somebody is focussed and in the zone. She birdied the first hole and it was on from there.”

The top 11 players made the All-CPC team, and Harnsberger achieved the feat for the third time in as many tries. After placing seventh as a freshman and fifth as a sophomore, she captured the fourth spot, trailing Reagan’s Morgan Ketchum, Reagan’s Anna Howerton and Reynolds’ Becca Connolly.

Donley: “She is one of the longest players off the tee in the conference – if not the longest. Morgan is the only girl that hits it about as far as Kyleigh does. She was walking tall and proud (after the 2-under). You can tell by her body language how she’s playing. All of them (including teammates Annika McDaniel and Caroline Bliss) have long hair. When they’re walking and that ponytail is swinging left and right, you know they’re having a good day.”

McDaniel finished ninth with a 93 and cracked the all-conference team for the second time. After finishing 11th as a freshman, she climbed to eighth as a sophomore.

Bliss took 11th with a 95. The junior finished ninth in the season standings to make all-conference for the first time.

Donley: “(McDaniel’s improvement can be traced to) offseason work with a swing coach, a lot of practice during the offseason and playing in tournaments. Both of them worked really hard and played in several tournaments all the way up until sometime in December. And they played in some spring tournaments. Caroline has hit balls all the time off the range. She has really worked at her ball striking, and that’s what’s improved the most for her.”

McDaniel: “I have felt more confident about my game this season. Coach Donley has helped me to stay calm and to stay focussed. My mom (Karina) has been my biggest fan over the years and also my dad (Mike).”

Bliss: “My improvement came from practicing with a purpose this summer and being more determined to do better.”