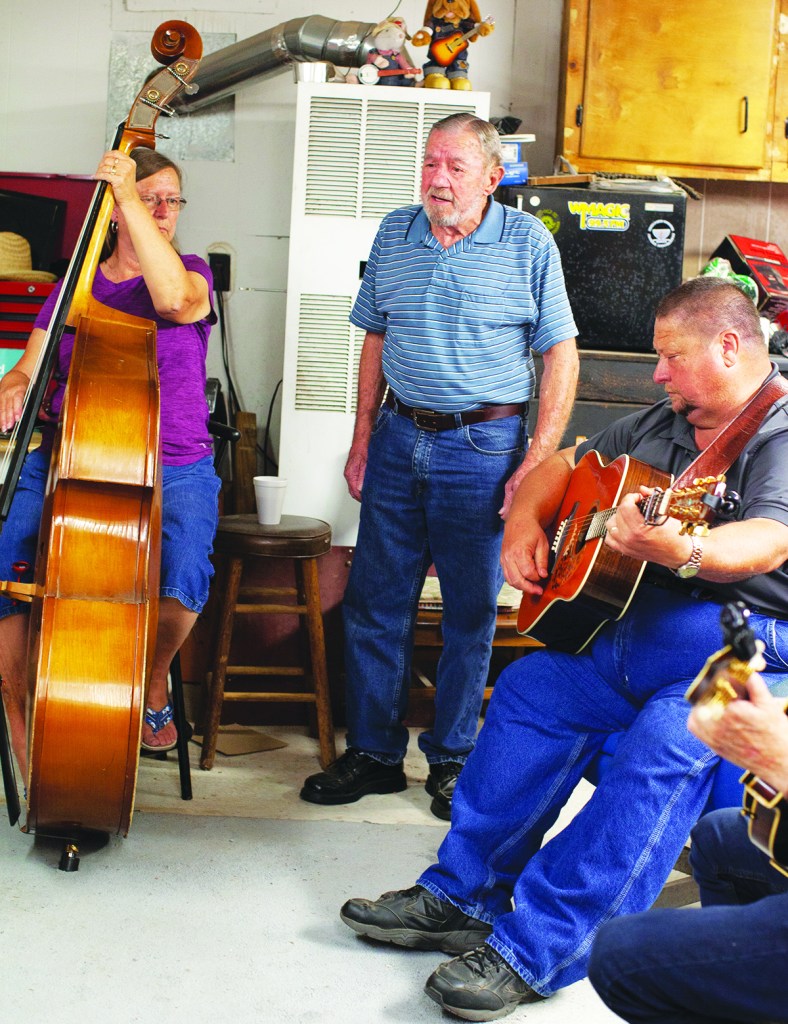 Oz Osborne sings with Lynn and John Powell at a weekly jam session.

Twenty or more years ago, John and Lynn Powell began having meetings every Tuesday night at 7, which could last until 10 or later. The meeting is about music. Young and old jam together and have a good, clean time.

Banjos, mandolins, bass, guitars, and dobros are part of the mix. Some are professionals and some are beginners. What’s important is they have a break in their week to come and play, have a good time and watch the fingers of the master, John Powell, play.

Music is language. Few chords fit in different keys and once you can get that you can follow along. Being part of a group like this is belonging to something and boosting confidence and morale is what it’s about when you are learning to play an instrument.

Powell has monitored many and loves to teach.  Ruth Shumway, 18, won first place at the Galax Fiddlers Convention.

Ettore Buzzini is a young 11 year old and has a bright future. He learned how to jam at Powell’s place and – of course – monitoring from John is what has helped him get where he is today.

A student he has monitored earned an East Tennessee State University scholarship to study bluegrass music.

John is humble and taking credit for any success that may come to his students isn’t his way, but he will brag on their accomplishments. If they call him at last minute and say they are competing in Wilkesboro, he gets up the next morning and plays as back up.  He’s a valued rhythm guitarist and mentor.

If you don’t play you can come to listen.  Everyone is welcome.

Scott Buckley plays the guitar and he said when he started he couldn’t spell the word musician but now he is one. Not sure if he was serious, but he sure can play.

When 8 p.m. hits, all instruments are put down for a rest while everyone enjoys cake and coffee from Vercie Lanning, Pamela Ellis, Judy Hildebrand and Yvonne Hart.

John and Lynn were part of a band called Broke and Lonesome and played three years in a row at the NC State Fair. They toured to Kentucky, Tennessee and Ohio.

His current band is Gaining Ground and is comprised of four players: John and  his wife Lynn Powell, Wendell Wiles and Dale Mills.

Traveling is what bands do and John enjoys watching the light go off when his student finally gets it and has risen to a higher level of playing. Many believe it’s because of people like John this kind of music will live on.

Framed ribbons adorn the back wall of his small garage where they jam. These jams used to be inside their home but the group got so large they moved to his outdoor building.