Davie scores at will vs. Reynolds 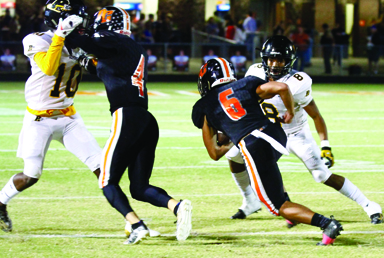 The Davie football team’s 14-0 lead over visiting Reynolds in the Central Piedmont Conference opener last Friday was a testament to the Nate Hampton-Jack Reynolds connection.

After Davie called pass plays on 11 of the first 13 plays, it started leaning on the rushing attack. Tate Carney rushed for 95 yards in the third quarter alone. DeVonte Lyerly had 62 rushing yards on his first two carries.

In other words, it didn’t matter what scheme offensive coordinator Matt Gould dialed up. Davie moved the ball up and down the field and scored at will in a 63-34 beatdown of the Demons.

Reynolds, which ended an eight-game losing streak to Davie in 2018, fell to 3-4 overall. The War Eagles (4-3) were five-point favorites, won by 29 and washed down the bitter tastes of three straight wrenching losses.

Coach Tim Devericks said: “We were so close in three losses by three points (each). That’s tough for kids to handle.”

But things weren’t perfect. With unbeaten West Forsyth on deck, Davie needed to make hay on the defensive side. No hay was made as Reynolds put up five TDs, 21 first downs and 444 yards. It added up to the second-highest scoring game in Davie history (Davie beat Page 50-49 in overtime in 2008).

Davie’s passing game sparkled in the first quarter. Hampton found Evan Little for 42 yards on the second play from scrimmage. A sack turned back that scoring opportunity, but Davie hit paydirt the next three possessions. Hampton and Reynolds hooked up on seam routes for 25- and 29-yard TDs. It was 14-0 and the Demons never got closer than seven from there.

At halftime, Reynolds had seven catches for 83 yards and was on pace to break the single-game record for receptions (12 by Ben Ellis in 2015). He settled for eight catches after scoring two TDs in the first eight and a half minutes.

Devericks: “We were trying to put the safety in a pick’em situation.”

On the 29-yarder, Hampton zipped the ball between three Demons. Devericks: “We were like: ‘Oh no.’ He threw a rope.”

From the second quarter on, Davie used its ground game. Any time Carney or Lyerly have the rock with a little bit of space, there’s potential for something special. After missing two games with a knee injury, Carney was electric with 14 carries for 142 yards and three TDs. He drew oohs and aahs when he hurdled a Demon. He averaged 10.1 yards per carry and did not see the field from the middle of the third quarter on.

Devericks: “He was excited. He was hungry.”

The War Eagles were less than pleased with their 21-14 halftime lead. The Demons got the ball first in the second half with a chance to get even. Davie linebacker Trevor Richardson delivered a game-changing play on the first snap of the third, the pass from Caden Davis deflecting off a Demon and Richardson making a shoestring interception. Carney went up the middle on first down from the Reynolds 21, and he wasn’t touched until he reached the 5, a touchdown that made it 28-14.

Devericks: “That was a momentum-changer that gave our guys some juice. I thought we could have done a little better in the first half, so I challenged (the offense) at halftime. We weren’t playing to our capability. I think we got a little relaxed with the (quick 14-0 lead), and that can’t happen in the CPC. We had a little more fire in our bellies (in the second half).”

Davie’s offense shrugged off a Reynolds 77-yard drive that sliced the margin to 28-21, scoring 35 points in about 14 minutes. With 5:12 left in the third, Lyerly emerged from the shadows. It was his turn to shine. Running as if he was angry at his feet, he went 21 and 41 yards on his first two carries, the latter for a TD that pushed the lead to 42-21.

Davie is one missed tackle from a TD anytime Carney or Lyerly are in the open field. Lyerly finished with 16 carries for 156 yards, scoring three TDs in a span of 10:02.

Devericks: “That’s a 1-2 punch, and hopefully we get Josh (Robinson, who had knee surgery) back pretty quick to add to the backfield. DeVonte is ready to run as soon as the lights come on. He was in a different role tonight, coming in as the second running back. To have the same energy and run like that was awesome.”

Again, credit goes to an offensive line that has exceeded expectations under Jimmie Welch. Camden Beck, Tanner Batten, Jared Simpson, Stuie Marshall and Spencer Williams are the starters, but all of Welch’s hawgs got playing time in this one.

Devericks: “We didn’t have too many missed assignments. We gave up one sack. We were able to run the ball downhill. They did an awesome job. (Reynolds) was trying to bring as many as they possibly could, and they were still able to get a push for us.”

• Davis kept Reynolds within striking distance for as long as he could, rushing for 112 yards and throwing for 250.

• Sophomore Isaiah Lytton’s first varsity catch was an impressive 21-yarder to the Reynolds 2. … The INT was Richardson’s first on varsity. … Kicker Willy Moure had a big night, going 9 for 9 on extra points. … The homecoming game lasted three hours, 15 minutes.

• Davie also welcomed back linebacker Hunter Meacham, who had missed three games with a broken arm. The senior played with a cast on his left arm. Devericks: “The first few plays he might have had some missed assignments because he was so jacked up to be back out here. It’s big for our team when we have a senior like that back from an injury and playing hard.”

• Davie found a new weapon for the kickoff return team. Justice Redmon had multiple long returns. On one of them, he threw a crowd-pleasing stiff arm that sprung him to the Davie 42. “We did something a little different in the off week and put a different lineup in there. Kudos to the whole unit for executing and giving Justice a chance.”