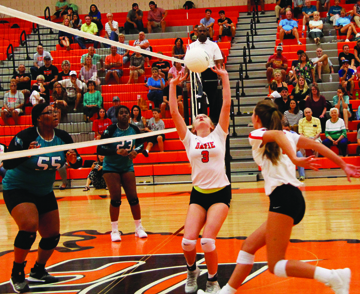 The Davie volleyball team’s modest 7-6 record during nonconference play might have raised a few doubts about Davie’s chances of repeating as Central Piedmont Conference champion.

The narrative has changed. The War Eagles registered a big statement with a 25-17, 25-16, 25-12 home win over Reagan on Oct. 1. Going into the match, West Forsyth, Davie and Reagan were tied for first. The day ended with West and Davie at the top.

It was a match the War Eagles had to have, and they took it emphatically. Coach Amber Brandon said: “We played really, really really good. We were firing on all cylinders.”

The War Eagles were 0-22 against Reagan before splitting four matches in 2018. They shared the regular-season crown. Davie beat Reagan in the CPC Tournament final, but Reagan beat Davie in the third round of the 4-A playoffs.

This was Davie’s first ever 3-0 win in the series. Brandon: “The last two years I think we peaked early. (This year) I think we’re on the right track. We look better every game.”

Davie blitzed Reagan 7-0 in the first set. Give credit to Jessica Crosby.

Brandon: “We started a marathon at a sprint rate. Jessica put a good serving run together. She got Kiah (Mathis) involved early, and Kiah had a good swing and saw the ball hit the ground. For an undersized young kid in the middle, that is so important. Jessica had a couple big runs, and that’s important because she’s our first server.”

Mathis – who started the season on JV, then moved up due to an injury – enhanced her reputation as a promising freshman.

Brandon: “Kiah had a really, really good night. She’s a kid with a ton of potential. Most of the teams in our conference have upperclassmen in the middle, so most nights she’s a freshman living in an upperclassman world.”

In a swing match that would have all but killed Davie’s title chances, seniors Dakota Hutchins, Zoey Clark and Kayla Moore were equal to the moment.

Brandon: “Dakota played good defense. Reagan has one really big middle that is a good blocker. The way our rotations matched up, Zoey had to swing against her a lot, and she did a really good job of swinging around the block, swinging through it when it was available and hitting off hands and using the block. Kayla had a big (serving) run during the second set, which stretched the lead at the end.”