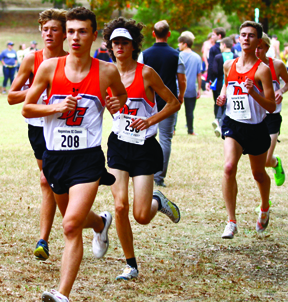 After battling unseasonably warm weather for the past month, the Davie cross country team got a break from the heat as they were among 43 teams at the Hagan Stone Cross Country Classic last Saturday in Guilford County. A total of 35 Davie runners competed in four separate races and 26 of them ran all-time personal best times.

After a couple of college races took place early in the morning, the War Eagles kicked off the high school session with the championship boys race. Coming in as the 14th seed,  Davie raced to 10th place against several of the top teams from central North Carolina and Virginia. Ethan Wilson of Christiansburg, Va., was the individual champion in a time of 16:04 on the 5k course. He edged William Hamilton of Forsyth Home Educators (16:08) and Reagan’s Spencer Baldwin (16:20). Christiansburg dominated the team competition with 34 points. They were followed by Reagan (70) and Grimsley (117).  Davie totaled 223 points.

“We ran very well today,” said coach Rob Raisbeck. “We haven’t been able to train like we wanted due to the heat over the last month, and the guys really took advantage of the cooler temperatures. Tenth place was a good result for us considering our seven varsity runners were one junior, five sophomores and a freshman.”

The championship girls race quickly followed the boys’ finish but featured only three Davie runners. “We had a few girls who were injured or out of town, so coach (Jeff) Jones and I decided we would not enter a full team in the championship race,” said Raisbeck.  “But the three girls who did compete had exceptional races. Each of them ran big PR’s.”

“We had been waiting for Emerson to have a breakout race,” said Raisbeck. “She really crushed it Saturday. And we really thought Riley was ready to have a big improvement as well. Coach Jones has been working with her on pacing and it really paid off with her performance. Chloe has been battling a knee issue so it was great to see her respond with a big PR as well.”

The Boys Developmental race was next up and featured a combination of varsity runners from smaller schools and JV teams from schools that competed in the Championship race. South Lakes raced to the team title with 70 points to edge Bishop McGuinness (101) and Reagan (102). The Davie boys placed ninth with 282 points. William Hartig from Radford, Va. was the individual champion in 16:35 and was followed by Evan Gibbons of South Lakes (16:59) and Jose Hernandez of McGuinness (16:59).

“Our depth is really improving,” said Raisbeck. “Three years ago a time of 19:25 would have challenged for our 7th runner on varsity. Now that time is 14th best on our team. And of those 14 runners, only two are seniors and two are juniors. The remaining 10 are freshmen and sophomores.”

The Hagan Stone race marked the end of the regular season for the Davie harriers. The CPC Championships will take place at Ivey Redmond Park in Kernersville Oct. 23. The War Eagles will enter the conference meet as the fourth seed in both the boys and girls races as Reagan, West Forsyth and Reynolds are among the top four teams in the 19-team Midwest 4-A Region for both boys and girls.