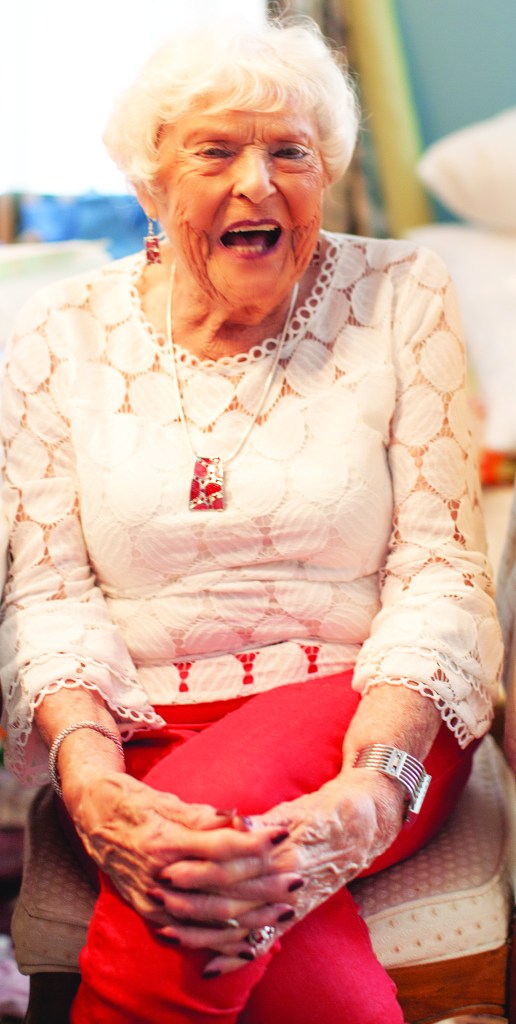 With slight reluctance, I asked an 85-year-old woman if she could sit on top of her dining room table and perch behind her sewing machine.

Without hesitation, she said, sure, and looked like a natural confident seamstress goddess.

Mildred James is a well-known seamstress and it’s fair to say you or someone you know has had things sewn by her.

James, born in 1934, was the oldest of six children and all she wanted to do in life was sew. She sat for hours watching her mother sew twill work pants for all the men who worked at Erwin Mills in Cooleemee.

James’ mother, the late Hazel Howard Wagoner, told her she couldn’t let her use the machine, a treadle sewing machine that had a motor attached, because her daddy had bought it for them and he might not be able to get them another one.  Her father was the late Paul Wagoner.

By the time James was 9, she knew how to make men’s pants by watching her mother, including the pockets, the fly and the zipper.

The first thing James sewed by hand was the hemming on her younger sister Pat’s church dress that their mother made. She still remembers doing that at the age of 10. Pat, Patricia Wagoner Stein, was her baby and the sun rose and set with her. “I was so excited to hem that dress.”

James loves to work.  Her mother taught her how to make two pans of biscuits for the family. She would make them at each meal, three times a day.  But when she got married she didn’t know how to cook for two.

Her biscuits were so awful, “you could have killed a bird with them. I always made 50, couldn’t make four because I didn’t know how. Mama forgot to teach me how to cook for a little crowd.”

When James was 17, she married the late Charles James. They were married for 25 years and of course she made her wedding gown. Her late husband was buried in a suit she had made for him.

Many times James whipped up suits at last minute overnight.   She went out of her way; she was the epitome of a giver.

James made her clothes in elementary school. In high school she made dresses for classmates, even a fitted light brown wool tweed tailored suit for her home economics class teacher while in the 12th grade. Her teacher approached her about making this suit for her because she didn’t know how to do it for herself.  James told her to watch her and she could learn.

“That was the most beautiful suit she ever had.”

Sewing for weddings were a piece of cake. She can think of a million things while sewing, while creating high quality garments.

A most unusual request was a horse  face cover.  Not knowing what that was she agreed to do it if she had something to go by. The customer was happy.

A square dance team needed ruffled dresses made for everyone. With James always working a job elsewhere, she continued to sew on the side. There were so many ruffles; ruffles around the neck, several ruffles on the sleeves, ruffles all down the dress, ruffles on top of ruffles. She completed one per night.  They were so happy with them and James told them she was happy they were pleased because that will be the last ones she was going to make for them.

She made cheerleading uniforms, majorette costumes, drum major uniforms for schools in Davie and elsewhere. The majorette costumes were a little challenging with all the sequins and stretchy fabric but she popped them out on time and lived with scattered sequins on the floor for a long time.

Her idol was her Aunt Jane, her daddy’s sister. She sewed a lot and at night.  James couldn’t wait until she could sew at night like her. It became a reality.

The longest she sewed without sleep was all night through all day the next day without stopping. She would snack on cheese and crackers while out in her sewing building and it would keep her going. At the end of that long day she said: ”you better get out of my way because I’m going to bed.”  Lots of times it was draperies.

Playing the piano, organ and singing, are added attributes of this spunky lady.  She is the current assistant organ player at her church where she has played since the church was built.

Preacher Turner was delivering a sermon and after James got away from her mother, she crawled up to the pulpit and Turner held her in his arms for the rest of the sermon. With her mother hanging her head of embarrassment, the preacher loved it.

While working at Hanes in the printables department, her house on 601 caught fire. Danny Correll, who worked at Hanes in a different department, was on his way to take his children to day care and he noticed smoke coming from James’ home.

At first he thought she left a pretty big fire burning then noticed it wasn’t near the chimney. He turned around and when he tried to knock on the door it was too hot. He hollered across the street for the onlooking neighbor to call fire department. Jack Lagle was one of the first responders.

The fire started in a wall because of faulty wiring.  Her managers at Hanes were good to her when she would have migraines with all the stress in her life. They allowed her to go into the windowless conference room and lie under the table until the headache was gone.

All her work clothes were scooped out with a big shovel. Men at the plant took up money to help her buy sheets and other needed items. Her wedding dress was in the cedar chest; the chest turned black but not burned.

“This was as big a shock as death is a shock. Same as taking your heart out of your body, you’ll get over it but you’ll never get over loosing a loved one. All those memories.”

She designed the house she lives in. She drew the plans herself and Hanes took those plans and applied them to a machine that printed them into blue prints. They were like family.

Her grandson Matthew still shakes his head when he sees the Legos he built when he used to stay with her when he was young.  They have stayed in the same spot all these years.

Her emotions got away with her when she told how her mother asked if she knew how she got her name.  Her mother called her first doll Mildred and when she had her she was her first real doll; James threw her hands to her face.

James admits she can be outspoken. About three years ago, she asked a lady who was touching the back of her hair if it looked bad. The lady said no and James told her, “well, it will if you don’t get out of it. I can’t stand for anyone to touch my hair or pat me on the head.  Don’t play in my hair, my hair is mine.”

Even if James is dressed in her favorite stretchy straight leg jeans, you can bet she’ll have on jewelry that matches and she wears it all proudly. When she was young she didn’t have it, “we got everything we wanted because we knew what to ask for.”

Sewing has always been a part of her life and there will be no stopping until she has to.

Joe Long is a music director at Turrentine Church where he and James sing together and share a lot of time together. Long is her good friend.