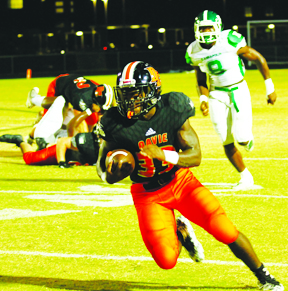 Sophomore DeVonte Lyerly has rushed for 217 and 91 yards in his first two varsity games.

Nate Hampton came within 25 yards of the single-game record for passing yards. He threw four TDs, one from the Davie record. Davie held a four-point lead with 35 seconds left, and visiting Kannapolis was 55 yards from the end zone with only one timeout in its pocket.

Lightning suspended play on Friday night at 9:34 p.m., with 8:34 remaining. The game resumed Saturday morning at 11, and the Wonders caught lightning in a bottle to beat Davie 43-40.

A 55-yard TD pass with 23 seconds left caused an eruption of sheer joy on the visitors’ side. The ending was an anesthesia-free root canal for the War Eagles, who were 73-0 when scoring 40 or more points.

Davie coach Tim Devericks said: “That’s very tough. Everyone is going to look at one play, but there’s 11 guys on every play. You have to execute, but everyone only sees the one. I told them at the end I will ride with that one and those two guys over there no matter what.”

The first quarter made it seem like the War Eagles were going to roll in their final nonconference game. Hampton hit Evan Little, who was wide open at the Kannapolis 22. The play went for 55 yards, and it was 7-0 after Guillermo “Willy” Moure’s PAT.

On Davie’s second possession, Chase Robertson, who didn’t play football in 2018 and entered the night with three receptions, made a sensational catch. The defender had his hand on the ball, but Robertson wrestled it away and kept his feet in bounds as Davie took command at 13-0.

Devericks: “I didn’t see the play when it happened. I was blinded from the sideline view. I heard them say he caught it and I thought: ‘There’s no way he caught that.’ Chase comes to work every day. He was a little banged up this week, and for him to gut it out, give everything he had and make a play like that is tremendous.”

After Trevor Richardson’s nine-yard sack, Hampton put the ball over two Wonders and receiver Jack Reynolds gained 38 yards to the Kannapolis 6. Davie stalled and settled for a 42-yard field goal from Moure, and it was 16-0 at the end of the first.

Nothing was clicking for Kannapolis. Ivan Poag had a minus-five tackle on the edge. On fourth-and-1 from the Davie 42, cornerback Beaven Arey was the first to meet running back Jakhiry Bennett as Kannapolis failed to get the first down.

A holding penalty negated what would have been a 58-yard TD for DeVonte Lyerly, but Davie still got points thanks to Moure. The junior kicker came in 1 for 3 on career field goals, the one make from 26 yards. He went 2 for 2 in this one, the second from 44 yards, or six from David Wooldridge’s record set in 2000. It was all Davie at 19-0 with 6:01 left in the first half.

Devericks: “You could see (Moure’s) confidence start to grow after the first couple of weeks. It’s him keeping his head down and kicking through it. He’s got the leg.”

When Davie took over at its 8 with only 1:26 left in the half, the Wonders were a rabbit in a briar patch. But they got the break they needed when Davie’s option run went awry. The pitch was behind Lyerly, who tried to recover it at the Davie 1. The ball squirted into the end zone and Kannapolis’ Josiah Cauthen recovered for a touchdown with 62 seconds left. The first of five extra points by Ty Woods sliced Davie’s halftime lead to 19-7.

Kannapolis still needed something to kick-start its offense, and Jose Vargas’ one-handed, 30-yard catch on the first play of the second half did the trick. The Wonders used five runs to cover the remaining 41 yards, and now it was 19-14.

Davie moved from its 24 to the Kannapolis 22, but a fumble erased the scoring opportunity. The Wonders had managed just 45 rushing yards on 16 attempts before Bennett went 48 yards to the house on a jet sweep. (It was the longest run Davie has given up all year.). Cam Kromah flipped a two-point pass to Austin Grunden to give Kannapolis a 22-19 lead.

The game had all kinds of twists and turns from this point on. Less than a minute after Kannapolis’ go-ahead score, Za’Haree Maddox caught a bubble screen, sent the defender spinning with a stiff arm and went 65 yards for an electrifying touchdown as Davie regained the lead at 26-22.

Reynolds’ 14-yard catch converted third-and-7, and his 11-yarder moved the chains again. Hampton placed a fade perfectly in the right corner of the end zone, and Zymere Hudson secured it for a 24-yard score as Davie moved back in front 33-29.

When safety Kristian Lyons made a minus-1 tackle in space, Kannapolis was faced with third-and-8 from its 8 with 8:34 to play. That’s when lightning was detected in the area and play was stopped. Thirteen and a half hours later, play resumed. Kromah threw incomplete and the punt was not good, Davie taking over at the Kannapolis 35.

But linebacker BJ Foster kept Kannapolis alive by intercepting at the 27 and returning it 18 yards. Grunden’s 15-yard catch on third down and Bennett’s 23-yard scamper set up a two-yard TD as the momentum swung back to the Wonders at 36-33.

Instead of rolling over, the Davie offense showed its mettle by putting together a 13-play, 73-yard drive that chewed up 4:26. On fourth-and-4, Hampton and Maddox connected for six yards. On third-and-5, Lyerly churned for six. Hampton’s keeper resulted in 16 yards to the Kannapolis 2. Then Hampton faked a handoff to Lyerly and went right to score. With 80 seconds to go, Davie had the 40-36 lead.

Devericks: “We were hitting on all cylinders. Even when the pressure was on late in the fourth, we were able to execute.”

With Kannapolis starting at its 35, Davie had a splendid opportunity to stop the rot after three-point losses to West Rowan and South Iredell. When Avery Taylor sacked Kromah 10 yards back to bring up second-and-20 from the Kannapolis 45 at :35, the junior defensive end looked like one of many heroes. Davie had its foot on the throat of a team that hadn’t thrown a TD pass all year. (Hampton, by contrast, has thrown 14).

But Kannapolis, which was averaging seven yards per pass attempt, did the impossible. Kromah and receiver Isaiah Black, who was playing QB until this game, burned Davie for the 55-yard TD at :23. Davie rushed four linemen and dropped seven into coverage. Black’s defender got tangled up and fell. Black caught the rainbow pass down the right sideline at the Davie 18. Lyons, rushing over from center field, was Davie’s only hope, but it was a futile effort.

For Davie, it was a soul-crushing TD that flipped the scoreboard from 40-36 War Eagles to 43-40 Wonders.

Black: “It was unbelievable. Cam gave me a great ball. I wasn’t even looking at the defender. I was just seeing where the ball is at.”

Newsome: “What a play. That kid didn’t play receiver until this past Monday. He was our starting quarterback the first game, then he split time the second week, and we went with our backup (Kromah) last week. Isaiah came to me. He said he wanted to get on the field and could I play him at receiver?”

There was a somber mood on the other side. “You’re under a minute, they’ve got to go (65 yards) … you have to feel pretty good,” Devericks said. “It’s a life lesson. Sometimes you put forth all the effort, you do almost everything right and you don’t get the outcome you’re looking for. I look around and it means something to these guys. They care about their teammates, and that’s a huge part (of being a team).”

Davie’s passing numbers weren’t gaudy the past two weeks, but Hampton and Co. were monumental in this one. Hampton (24 of 44 for 388 yards) threw four TDs and ran for one. He threw for the third-most passing yards in a game; now he owns the Nos. 2-3 spots in that category. He threw four TDs in a game for the third time this year. Only Chris Reynolds (four times) has done that more. Garrett Benge did it three times.

Reynolds (8-125) was enormous with his second eight-catch game of the season. Maddox (7-109) was equally dazzling. Lyerly rolled for 91 yards in his second varsity game.

It’s a shame it all went for naught. “(Hampton) played excellent,” Devericks said. “All four (of the receivers) want to make plays for the team. Jack’s a tough cover. So is Za’Haree and so is Zymere. Again, the OL (Camden Beck, Tanner Batten, Jared Simpson, Stuie Marshall and Spencer Williams) opened up a lot of holes for DeVonte. The OL pass protected their butts off, allowing Nate time to find the guys who were getting open.”

• The wild shootout saw 11 TDs and seven lead changes in the last 18:17. The Wonders scored 43 points in the last 24:39, did not commit a turnover and took advantage of three Davie giveaways.

• Running back Josh Robinson (knee) and linebacker Hunter Meacham (broken hand) missed their third games. Running back/receiver Tate Carney missed his second, but he should be back for the conference opener next week.

• The War Eagles have gone from 3-0 to 3-3 for the first time ever. All the games have been nail-biters. They won by one, 11 and one. They’ve lost the last three by an aggregate nine points.

• Davie has a bye this week. The CPC opener is at home against Reynolds on Oct. 11.