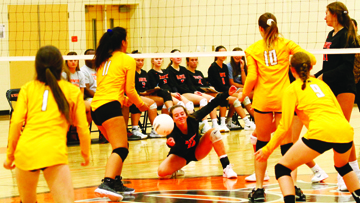 It’s been a roller coaster season for Davie’s varsity volleyball team, losing nearly as many matches (seven) as the past two seasons combined (eight). Showing perseverance, the War Eagles entered the week on a 5-1 run and in a three-way tie for first.

Davie, West Forsyth and Reagan are all 3-1 in the Central Piedmont Conference.

At home against Glenn on Sept. 24, Davie rolled in three sets as expected. The Bobcats (6-8 overall, 0-3 CPC) stayed in last place. They have lost all seven meetings to Davie since 2015.

Two days later, Davie had a pivotal match at East Forsyth. Although East is all but assured a losing record, it jumped up and shocked West in five sets to throw the race for first into a free-for-all.

Davie coach Amber Brandon said: “East has the player with the most potential in our conference, and (sophomore Kadynce Boothe) has verbally committed to Tennessee. When she is on, she is on. From what I heard, she had a standout night against West Forsyth.”

Davie has been without injured middle Dyllan Everhardt since Sept. 5. Kiah Mathis was moved from JV to varsity when Everhardt went down, but she was out of town for the East match. It mattered not. Sophomore Abigail Reynolds rose to the occasion.

Brandon: “We had to do a major lineup shift. We moved Abby to the middle. She did a great job. Her main job was to make sure she could keep their one power hitter (Boothe) under control, and she did a really good job of that. She had a couple kills. One of those was at a huge time in the first set. We trailed the majority of the first set. Kayla Moore had a big service run, and Abby had a big kill that got our kids fired up. They knew she was doing something that she was uncomfortable with.”

Davie needed a big night from Aimee Loj, and the sophomore delivered.

Brandon: “Aimee had a really good night. She did a great job at the net of getting touches. If she needed some evidence that she could play volleyball at the next level, that should have been it. She did a good job of keeping a kid that’s committed to play at a school that’s ranked in the top 25 in the country under control.”

Brandon: “Moore, Clark, Stakely and Hutchins had good nights in serve-receive. Moore, Clark and Crosby did a really good job on defense. Playing middle back against a good outside hitter is not an easy job. Ali had to hit against a big block that (Boothe) provided, and Ali led the team in hitting percentage and had 12 kills.”