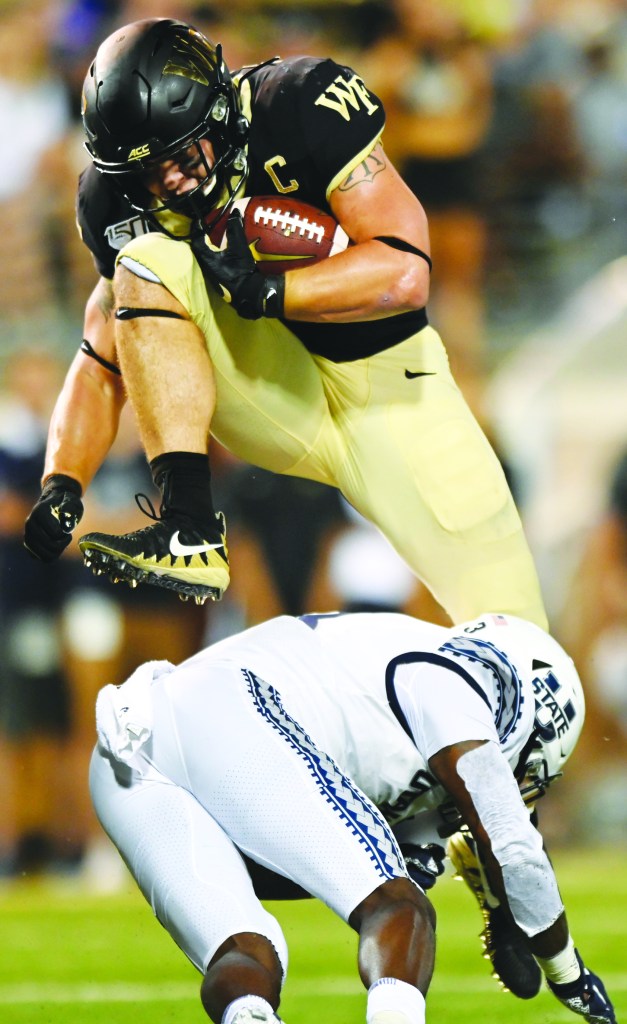 Wake Forest senior running back Cade Carney of Advance was named as a semifinalist for the William V. Campbell Trophy by the National Football Foundation.

Celebrating its 30th year in 2019, the award recognizes an individual as the best football scholar-athlete in the nation for combined academic success, football performance and exemplary leadership.

Carney is a 5-11, 215-pound senior (Davidson Day) who is in his second year as a team captain.  In 2016, Carney became the first freshman to start his first game on campus when he started vs. Tulane in the season opener.

Carney has earned mention on the academic dean’s list three times, is a three-time ACC Academic Honor Roll honoree and has twice been named to the Academic All-ACC team.  He serves as a board member of Santa’s Helper which collects, wraps and distributes toys to underprivileged children in Forsyth County.

“Cade is an outstanding representative of not only our football team but of Wake Forest University,” said head coach Dave Clawson. “He has excelled as a student-athlete, in the classroom, and in the community.  Cade is a leader who has twice been elected a team captain by his teammates.  Cade is a special person who would be an outstanding representative of all that the Campbell Trophy represents.”

The NFF will announce 12-14 finalists on Oct. 30, and each will receive an $18,000 postgraduate scholarship as a member of the 2019 NFF National Scholar-Athlete Class. The finalists will travel to New York City for the 62nd NFF Annual Awards Dinner on Dec. 10, where their accomplishments will be highlighted. Live during the event, one member of the class will be declared as the winner and have his postgraduate scholarship increased to $25,000.