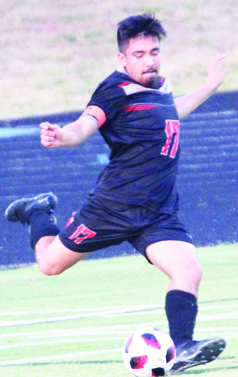 Adrian Romero has a free kick. - Photo by Mark Floyd

In a season full of heartache, Davie’s varsity soccer team found something to celebrate in a 5-1 win at East Rowan on Sept. 17.

Coach Nathan Stephens said: “We had one team with one goal. We talked about it since last Thursday, and honestly, nothing was stopping us tonight. It was a long-time coming.”

Lucano marks, Luke Stillson and Danny Torres did the scoring as Davie built a 3-0 halftime lead. Kevin Osornio-Avilez had an assist before getting a second-half goal. Torres got his second goal in the second half.

Torres, who has six team-high goals, and Stillson wreaked havoc all game.

Nicholas Ruff was formidable on defense. “Nick played really smart,” he said. “He pretty much played the whole game; he came out for about five minutes when he took a pretty good lick. I was impressed with how he held his composure and ran things out of the back.”

Before the breakthrough win, it was hard not to sympathize with Stephens. Fifteen of his 20 players are in their first year on varsity.

“We’ve got five guys that played varsity last year,” he said. “I told them: ‘Keep your head up high.’”

A 5-1 home loss to Atkins on Sept. 10 was incredibly frustrating. The Camels (5-1-1) mounted a 4-0 halftime lead, but it could have easily been a close game at intermission.

Stephens: “We had some unlucky goals (against us) in the first half. Two were questionable.”

Davie played Atkins even in the second half. The goal came from Torres, who was assisted by Kevin Morgan. The frustrating part was Davie narrowly missed a handful of goals.

Stephens: “We came out on fire in the second half and had four or five shots that just missed. We kept hammering them (after Torres’ goal). Shot after shot just missed wide or over.”

And then: “We played hard. I was very proud of our team. It was a totally different game from (the 5-0 loss to Atkins on Sept. 5). Again, we’ve got to find a way to put together two halves.”

Davie, though, played an excellent first half at HP Central. It was 0-0 through 40 minutes.

Stephens: “That’s good stuff. We finally had a first half that we could really be proud of. It’s not the (final) result we wanted, but I think we put a little shellshock in High Point Central in the first half. Everybody on the team played exceptionally well. They played really hard. I was real proud of them for how they played.”