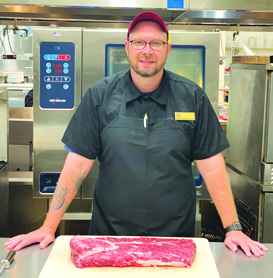 Hometown: I was born in Jamestown and now live in Kernersville.

Home Life: I have a son named Ian, who is 21 years old and also works in the restaurant business at Greensboro Country Club. My adoptive parents still live in Jamestown. My mom is my hero, and I love her very much.

Significant Other: Yes, and her name is Ashley.

How You Met: We met when both of us were working at Greensboro Country Club.

Early Kitchen Duty: My first job was in Greensboro at Hugo’s restaurant about 20 years ago.

Stops on the Culinary Circuit: I was Executive Chef of The Marisol in GSB. I apprenticed under German Master Chef, Rolf Kugel, at Grandover Resort. Later, I became the interim Executive Chef and Executive Sous Chef at Greensboro Country Club. I’ve also been a culinary Instructor at Virginia College’s satellite campus in Greensboro.

Free Time: When I have time, I like to play golf, go mountain biking, and go skiing in the winter.

Favorite Places to Travel: I like going to big cities just to hang out, and wander around and eat. My last trip was to Manhattan for a week, but I also enjoy Chicago and Washington, DC. I like to go to places where I can walk or take the subway and usually stay downtown at an Airbnb. I enjoy travel to eat and be inspired by other chefs – to see what other people are doing. I like people, so I meet a lot of characters that way. I try to meet the chefs when they have time to meet me. One of the dishes on our menu was inspired by something I ate off a food truck. I’m not concerned about it being high end – I’m more concerned with it being good.

Planning Ahead: When I can take some time off, I’ll see where I can get a flight to and then just take off.  Wandering around, you just find the most interesting places and people that way.

Current Position: I’m Executive Chef for a country club and restaurant in Bermuda Run, where I oversee my apprentices, Jesus Santiago, Jeremy Nixon, and Ty Anderson. I couldn’t run the show without them.

Favorite Things to Cook: For me, I like making sausages. Working under a German chef for so long, I got a real love for that sort of food. But I also like seafood. I’m kind of known for my seafood dishes.

Something No One Knows About You: I hated my first cooking job and said I’d never do it again. I moved to the mountains in Banner Elk for skiing, and that’s when I ended up getting back into it. When ski season was over, I needed a job and started working at a little place in Foscoe, at Country Retreats Family Billiards. That was a while back about 17 years ago.

Favorite Food Memory: We did not have a lot of money growing up. On Christmas Eve, instead of some big dinner, my mom would make hotdogs. They were not special but just cheap hotdogs with Texas Pete chili out of a can and Ruth’s brand coleslaw. It was not fancy, but my whole family would be there packed into the tiny kitchen and living room. That’s my favorite food memory.

Tim’s shared a few of his favorite recipes that are not only perfect for fall but will carry you all the way through the winter months and holiday season. Enjoy the deep, earthy flavors of these rich glazes while warming up to a selection of specially seasoned meats. What could be better than to follow your meal with a few sweet bites of a seasonally inspired, fresh apple bread pudding? But, look out – you’ll be going back for seconds.

½ of an onion unpeeled (root removed)

Except for the bourbon, place all the ingredients in a stainless steel heavy bottom pot, and place on low heat. Leave uncovered, and allow to reduce for 30 minutes or until the sauce becomes thick and glazy. Add the bourbon, and allow to cool.

1 bottle of Pinot (I like Meiomi for this personally)

Roast the plums at 300 degrees F. for 1 hour. Remove the pits, and puree in a food processor or blender. Except for the orange juice, add everything into a four quart pot, and reduce by half. The sauce should appear thick and glazy at this point. If it is not, cook and reduce a little longer. Be careful not to burn it. Add orange juice, and let cool on the counter. Do not put it in the refrigerator or it will solidify. The sauce should be nice and thick now and ready to eat. (This is a great holiday glaze for game meats or ham. Additionally, it is very red wine friendly.)

One side of slab bacon

A Dutch oven or cast iron pan is best for this dish. Preheat the oven to 300° F. Score the bacon on the fat side in a diamond pattern, ¼ inch apart.  Place Dutch oven over medium high heat. Sear the fat side of the bacon, and cook it until golden brown and crispy. Once brown and crisp, remove the bacon, and pour out the fat. Return the bacon to the Dutch oven, add the liquids, cover with the lid, and put in the 300° F oven. Cook for 4 hours. By this time, the bacon should be very tender. Remove from the oven, and set on the counter to cool. Once the bacon has become cool enough to handle, remove it from the pan pot, and place in the refrigerator until it is completely cool and firm to the touch. Slice the bacon to your desired thickness. Cook in a pan over medium high heat and enjoy. (I added braised bacon to our menu. It’s something I have been making for a while, is fairly easy to make and awesome on sandwiches or as a breakfast side.)

salt and pepper to taste

Place the pork loin in a large sealable bowl or dish, then cover with the tea, and add the peppercorns and cinnamon stick. Place in the refrigerator for 24 hours. Preheat oven to 350° F. After brined, remove the pork, place in a roasting pan, and pat dry. Save 2 cups of the tea. Rub the pork loin liberally with salt and pepper. Peel and quarter the apples then place them in the pan with the pork. Put the pork in the oven for about 25 minutes or until it has reached an internal temperature of 145° F. Remove the pork from the oven, and cover loosely with foil. Let it rest for 15 minutes before slicing

While the pork is cooking, place a 2 quart sauce pan on the stove at medium heat with the reserved tea and reduce it by half. Add the apple cider, and reduce by half again. Add the beef broth, and reduce by half again. Mix the cornstarch and water together, and whisk it in to the sauce to thicken. Let simmer for five minutes. (This dish is a great fall dish. It doesn’t require a lot of prep work and will make your house smell incredible. I encourage you to source these ingredients from the farmers market and make your own sweet tea.)

1 bottle of brown ale (I like Newcastle for this)

Preheat oven to 350° F.  Set a heavy bottom skillet or Dutch oven on a burner set to medium/low heat. Add the butter to the pan, and allow to melt completely. Add the brown sugar, and stir until dissolved. Add the onions and the beer. Cook for 20 minute, stirring often. Season the chicken with salt and pepper, then add to the pan, making sure it is lying flat and evenly spaced apart. Place uncovered in the oven for 12 minutes or until internal temperature is 165° F. Remove from oven, and rest for 10 minutes.  (I have been cooking this dish for a very long time. It is very easy to prepare and is nice when cold weather days arrive.)

Juice from 1 lemon and zest

Mix all together in a sauce pot, simmer for 5 minutes, and then let cool for 15 minutes. While mixture is cooling, mix these ingredients in a mixing bowl.

1 quart of half and half

12 large croissant that have been cut up and toasted

Pour the cooled mixture into the bowl with the other ingredients, and toss with your hands until the croissants are completely coated. Move mixture into a greased 9×13 cake pan. Bake at 350 degrees for 30 minutes. (Let stand for 20 minutes before eating. This is my favorite Christmas dessert. I had a friend from Whales when I was growing up and learned this recipe from his mom. If you cannot find dried currants you can substitute raisins.)