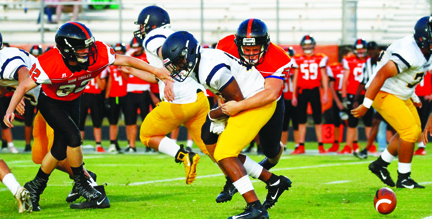 The story for Davie’s JV football team during a 21-6 home win over South Iredell on Sept. 19 was the hard-nosed defense and a highlight-reel play by Isaiah Lytton.

The combination kept Davie (5-0) unbeaten through the final nonconference game of the season.

Coach Perry Long said: “I’m excited for this team. We’re not real big, but we’re scrappy and we get after it.”

Bryson Parker made the first big play with the game scoreless in the second quarter, blocking a punt to give Davie’s offense a short field at the South 30 and sparking a 21-0 run in the quarter. Then Alex Summers tossed a 21-yard touchdown pass to Lytton. The point-after kick was good by Palmer Williams, who went 3 for 3 on PATs.

Another South punt was blocked, this time by Jadon Davis. Davie took over in South territory and Brodie Smith broke a 15-yard TD run.

It was 21-0 at halftime after a jaw-dropping play by Lytton. What he did after Summers threw an interception is criminal in 12 states. Lytton came out of nowhere, ripped the ball from the South player and took the fumble recovery 30 yards the other way for a touchdown.

Long: “You can only appreciate this on film. Isiah comes across the field, takes the ball from him – takes it out of his hands – and runs for a touchdown. Isaiah was running a route on the other side of the field. The (South) guy was running on our sideline. Isaiah came across the field and took the ball from him. I’ve never seen anything like it. He said: ‘I’m getting a touchdown somehow.’”

Defensive coordinator Blaine Nicholson: “He basically snatched the guy’s purse after the interception. I attribute that to his dog mentality. It was amazing. I’ve never seen that in football, and I’ve watched a lot of football. He continues to make big-time plays, and he makes them look so easy. The guy made a pretty good play, high-pointing the ball, and Isaiah ran a good ways to get to the guy. I was already calling for defense to get ready. Then I was calling for PAT. It was crazy.”

The numbers were not pretty for Davie’s offense, which was without running back DeVonte Lyerly, who was pulled up to varsity due to injuries to Josh Robinson and Tate Carney. Lyerly has most likely made his last Thursday appearance; the next night he racked up 217 rushing yards in a varsity debut for the ages.

Smith rushed for 43 yards, Summers threw for 116 on seven completions and Lytton had 74 on three receptions. Justin White had two catches, while JT Bumgarner, Kole Bilyeu and Cole Warner had one apiece. Davie has only managed three offensive TDs in two weeks.

Long: “We’ve got to pick it up. It makes a big difference (playing without Lyerly) because it opens up the passing game up when you can run it.”

Freshman linebacker Morgan Creason had an interception. He’s got the bloodlines; his father Jonathan was a fullback for the 1996 and 1997 War Eagles. The former team made history by winning the first playoff game in school history; the latter broke the then-record for wins with 11.

Long: “I was excited for him. He had a concussion (and missed games), but he’s going to end up being a real good ballplayer.”

Nicholson: “He was fired up. He almost knocked coach (Todd Bumgarner’s) hand off he was so fired up. After having a concussion, it’s good to see him back in there.”

The defense has been fantastic all year, allowing just nine points per game. Long marveled at sophomore d-lineman Mark Dixon.

Long: “I’m telling you, Mark is going to be the real deal. They couldn’t block him and he had been sick all week. When he uses his hands, not many of them are going to be able to block him. When he gets stronger … he’s still a baby. When he gets man strong, they’re going to have trouble blocking him.”

Nicholson: “It seemed like Mason had 10 tackles in the first half. He’s a big-time effort guy. I expect really big things from him in the coming years, maybe as soon as next year. He does a good job of getting flat down the line. They tried to run a lot of slip screens with their running back and the OL let them go. He’s a smart guy. He’s pretty studious when it comes to film work. He made a bunch of great plays.

“Isaac is physically gifted and stronger and faster than a lot of people he goes up against. Vance is lanky and a big effort guy, too. We don’t exactly have Alabama’s defensive line, but we’ve got a bunch of guys who run to the ball, and when they get there, they’ve got some bad intentions.”