Half marathon coming to Mocksville 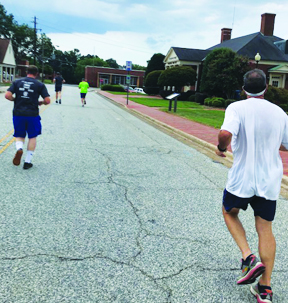 Local runners train for the Main Street Half Marathon on Nov. 9.

Organizers of The Main Street Half Marathon of Mocksville hope the event will help people focus on their health while realizing they can complete a half marathon, even if they never thought they could.

The idea came on the heels of Hurricane Sandy, which ravaged the northeast in 2012. Ali Hartman, originally from New Jersey, said the area, including the headquarters of Pro-Activity, where she worked, was impacted by the storm. The wife of one of the senior partners in the firm was supposed to run the NYC marathon that year but didn’t feel right about running through towns and boroughs that were still reeling from the storm, so she and others made a last minute decision to run local, a marathon with the proceeds benefitting a hurricane relief charity. They spread the word that if folks would show up in 48 hours, there would be a race course and support along the way, never expecting to see the 500 runners that showed up that Sunday.

Hartman said it was then that they realized people were yearning for local, more intimate races, but life got in the way and plans to do another race were put on the back burner, until 2016 when some folks picked the idea back up, rolling around that it should be a way to bring a community together, drive positive foot traffic into the towns, and raise money for charity.

In October 2017, the race was launched with a sold out field.

Hartman, who moved to Davie County seven years ago, helped with the race in New Jersey in 2018 while she was completing a residency at Pro-Activity there. A former competitive equestrian and a runner, Hartman, a doctor of physical therapy who leads the NC division of Pro-Activity, was in Mocksville with her husband to eat dinner one night in November, an outing that just happened to be the same night as the bed races.

“I was like, Oh my gosh, this is our Main Street. It would be the perfect place for the next location of Main Street Half Marathon.”

Hartman explained Pro-Activity is the parent company of Main Street and will provide a lot of the infrastructure to allow Main Street to continue to expand and flourish. Hartman expects some of her colleagues from the other offices will be here to join in the race and offer support.

Much as is the thinking with Shop Local, the event will support Race Local, because, as Hartman said, “We want to drive home the fact that no matter where in the world we go to race, there is something special about racing alongside your neighbors, friends, and family that not even the flashiest medal can beat.”

The race festivities will kick off Friday, Nov. 8, from 4-7 p.m. with an expo and packet pick-up downtown that will feature vendors, music, refreshments and activities. One of those activities is the Superhero Sprint, for “superheroes of ages old enough to tot and not too cool to trot,” a 200-yard sprint open to all ages, where the participants receive a cape before the run. They are also encouraged to dress up in their favorite costume. The festivities are open to the public but there is a fee to participate in the sprint.

The race will begin the next morning, with walkers and push-rim/adaptive athletes starting at 7:30, followed by the runners at 8 a.m. The start will be corralled, and athletes will be released in waves based on estimated finish time. All athletes must complete the event by noon. Hartman hopes there will be pacers available for several finish time slots and is looking for volunteers to be pacers.

For those who aren’t quite up to the challenge of the full 13.1 miles, there is also an option for a two-person relay. Participants can also sign up to take part in the MSHM Team Challenge, either by organizing a team or joining one. Perks of being on a team include discounts on entry, training plans and entry into the team division challenge. A team made up of more than 50 participants will even get their own Porta-Potty on race day.

All participants will receive a custom t-shirt and a medal as they cross the finish line and make their way to the post-race party at Junker’s Mill, where there will be live music, awards, a recovery tent and food and beverages free for participants and for sale for friends and family.

The course will include glimpses of downtown and surrounding areas, as well as scenic farm views as it takes participants along Main Street, through Rich Park, and then out County Home and Jericho Church roads before ending on Main Street. The website calls the course “challenging” but adds, “If it doesn’t challenge you, it won’t change you. We are certain this course will do just that and leave you with a sense of accomplishment that is hard to parallel.”

With the exception of Main Street, the course will stay open to vehicle traffic. There will be traffic cones along the course as well as course marshals at major junctions and police officers at major intersections. Motorists are encouraged to avoid the race course that morning if possible.

Earbuds are allowed but strollers and dogs are not.

There will be water and sports drink stops along the course and portable toilets available on the course, as well as real bathrooms at about the halfway point.

Friends and family members are encouraged to be along the course to provide encouragement to the participants, and a map with parking and suggested cheer zones will be available on the website before the race.

“It takes a village to create a race experience that leaves participants wanting to come back again and again,” said Hartman. “From pacers, water stop volunteers, course marshals, start and finish line management, cheer zones and more, we need the help of the community. To make volunteering a little more fun, we are holding a Loudmouth Cheer Zone Competition for groups organizations and clubs to compete on being the best and most supportive cheer zone. If the runners vote them the best cheer zone, that station will win $500 for the charity of their choice.”

Information on how to volunteer is available under the volunteer tab at www.mainstreetmarathon.com/Mocksville. Other pertinent race day details can be found on the website and on Facebook at Main Street Half Marathon of Mocksville.

Sponsorships are available. There will also be free childcare offered at the Davie YMCA for children of participants.

A free sample training plan provided by Pro-Activity is available on the race’s website under the Runners tab, mainstreetmarathon.com. The 12-week plan started Aug. 18 but it isn’t too late to get started. Participants are encouraged to consult with their healthcare provider prior to beginning any new exercise routine.

Registration is available online at www.mainstreetmarathon.com/Mocksville or at the expo November 8, space permitting. General registration for the half marathon from September 1-30 is $70. From October 1-31, the cost is $80, and after that, the cost is $85.

Proceeds after costs will go to a local drug addiction recovery program.

Hartman hopes for a good turnout, not only in terms of participants but also community members.

“We want this to be a celebration and a time for the community to come together and have fun. The Superhero Sprint is a great opportunity for little kids to dress up and then realize, Hey, I moved and did something fun, and my whole family was there cheering for me. This whole event is about highlighting some of the greatest things Mocksville and the surrounding areas have to offer – beautiful landscape, welcoming communities and generously supportive small businesses, which doing what we can to fight addiction. We hope this race is a celebration of health for whatever that means to people.”