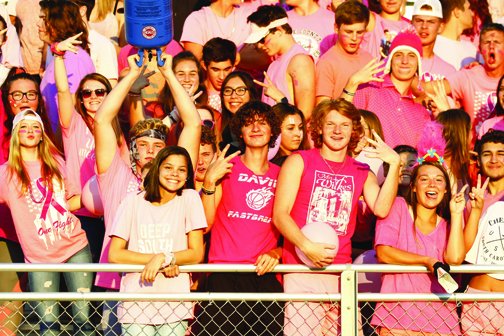 Davie’s football team wrote another impassioned chapter in its best start in 13 years Friday night at War Eagle Stadium. After giving up a touchdown at the beginning of overtime, the War Eagles answered with a TD, then converted a two-point run to capture a dramatic 31-30 win over Mooresville.

In the two previous weeks, the War Eagles held on by stopping a two-point conversion (28-27 over Page) and by overriding an eight-point deficit in the second half (42-31 over North Davidson).

Coach Tim Devericks said: “It hasn’t been easy by any stretch of the imagination, but we’ve had belief in each other and the willingness to keep battling when the chips are against you.”

Before a huge crowd, the War Eagles went the final 26:54 of regulation without holding the lead, and they trailed by seven before touching the ball in OT. Nate Hampton threw the OT touchdown to Za’Haree Maddox. Hampton ran for the conversion to send fans streaming onto the field in celebration.

On Devericks’ decision to go for two and the win, running back/receiver Tate Carney said: “I love that he wanted it to be in our hands when the game was on the line. It shows he really trusts us. It was a great team win.”

Hampton and the offense had another prolific performance. The 6-5, 225-pound junior went 27 of 48 for 411 yards and four TD passes, breaking the school record for pass attempts in a game and tying the record for completions. One week after throwing for the sixth-most yards in a game, he finished with the second-most yards ever. He tossed four TDs for the second week in a row, one shy of the record. Three of them came in the fourth quarter/OT.

The War Eagles controlled the first 17 minutes. Hampton’s 26-yard completion to Zymere Hudson on a crossing route set up the first career field goal for junior Guillermo “Willie” Moure, who converted from 26 yards for a 3-0, first-quarter lead. (The lefty was 0 for 1 on FGs for his career before that.)

In the second quarter, Hampton went 4 for 4 on a six-play, 67-yard drive. Two of the passes went to Adrian Cranfill, who was making his senior debut. He scored on a 31-yard pass play as Davie took a 10-0 lead.

Devericks: “Adrian’s had some adversity in his life and he’s had to miss two games. But he hasn’t missed a practice. He was the scout-team running back in practice for two weeks; he gave us a good look. And when he got his opportunity tonight, he made the most of it.”

Davie, though, was wobbly over the next quarter and a half. The Blue Devils dominated the last 6:53 of the second quarter. Receiver Ryan Jackson wasn’t touched on a 75-yard TD reception, Elijah Wilson intercepted Hampton at the goal line when Davie was threatening, and Keshaun Black caught a short pass, made a juke and raced 71 yards to give Mooresville a 13-10 lead.

The Blue Devils were at their 19 with only 34 seconds left in the half. They zipped down the field in four plays and got a 42-yard field goal from Isaac Riffle with zeroes on the clock to cap the 16-0 run and grab a six-point halftime lead.

Devericks: “At halftime we talked about our tackling had to improve. We had a lot of arm tackles. Give credit to them. They have big, physical guys who run the ball hard.”

Not only was Davie behind, it was losing one player after another to injury. Receiver Hudson got hurt in the first quarter. Defensive lineman Ben Norman (elbow) left two minutes into the second quarter. Receiver Evan Little was sent to the locker room with five minutes left in the half.

Making matters worse, Davie’s offense was sloppy in the third. An 18-yard holding penalty put Davie in a second-and-32 situation. Two pre-snap penalties undermined the second series of the third. A fumble gave Mooresville the ball at the Davie 38, not far from Riffle’s range. When Jackson made a 16-yard reception on third-and-7, Mooresville was at the 19 and primed to make it a two-score game.

Davie needed a clutch play. Senior cornerback Justice Redmon delivered on the first play of the fourth, picking off a pass at the goal line and returning it 35 yards.

Devericks: “Justice did not have a good play in the first half; we had to get him over and talk to him. In the third quarter, I was telling them: ‘All we need is one play. One play can change the momentum.’ They’re going in to make it 23-10, and he comes up with a huge play – topping the seam route.”

Davie failed to capitalize on Mooresville’s only turnover, going three-and-out, but tackles by Justus Tatum and Bowling forced a Mooresville punt.

The final 10 minutes were frenetic. Hampton maintained his poise with a bobbled snap and found Carney on a short route over the middle at the Mooresville 45. Carney sprinted untouched for a 54-yard TD. The PAT was wide right to leave the score tied at 16.

Carney: “They were leaving the middle of the field wide open with their coverage, (offensive coordinator Matt) Gould made a great call and we just took advantage of it.”

Devericks: “It’s a crazy thing. They had a bobbled snap in the first half and got big yards. We had a bobbled snap there, and it sort of throws the timing off for everybody on both sides of the ball. Nate was able to get his eyes back up and find Tate.”

Just when things were going Davie’s way, it watched Black turn the left corner on the ensuing kickoff. He dashed 99 yards to put Mooresville back in front 23-16.

Black and QB Hunter DeBerardino (17 of 31 for 258 yards and two TDs) did everything they could to lift their team. Black (seven catches for 133 yards) would score three different ways – receiving, special teams and rushing.

Devericks: “(Black) is one of the fastest kids I’ve ever seen play football. Phenomenal player.”

Davie answered right back, driving 71 yards in 10 plays to force another tie. Jack Reynolds came to the rescue on fourth-and-9 from the Mooresville 44. Hampton’s pass to the right was intended for Carney, who got a hand on it. Reynolds cut off his route, came back to the ball and reeled in the deflection to pick up a desperately needed first down.

Devericks: “Jack makes those plays in practice. Our defense loves to see him out here making plays on Friday night and not against them. We had a take (route) and a wheel on that side, and Jack came back to the ball.”

Reynolds, a superior route-runner with fly-paper hands, had an awe-inspiring night with eight catches for 157 yards.

“Tate had a 10-and-out and I was doing a wheel route off the sideline,” he said. “I saw that it was a high pass, so I cut off the wheel route. I saw the tip. I knew it was fourth-and-9 and the biggest thing was go down with it. Who cares about the run, just try to make a catch.”

Two plays later, Maddox took over. He made 15- and 18-yard catches on consecutive plays, the latter good for a touchdown. Moure’s PAT tied it at 23 with 6:39 to play. Maddox (seven catches for 73 yards) had a stunning performance after coming in with four receiving yards in two games.

Devericks: “Zymere and Evan went down, so it put us behind the eight-ball in receiver depth. But confidence is not a problem for Za’Haree.”

Hampton: “He’s been doing it all offseason, all practice, working routes after practice, and he deserves every bit of it.”

Bowling: “That’s my boy. He came up big. We’ve been talking about this for a while.”

After Bowling buried Jebari Lackey a yard behind the line on a third-down pass, Riffle trotted out for a 55-yard field goal with 1:12 left. As Davie fans held their breath, the kick fell short.

The Davie o-line gave Hampton perfect protection and he connected on a post route to Reynolds for 38 yards to the Mooresville 26. After three incompletions, Moure tried a 48-yard FG at :13. It was blocked.

The fourth-quarter roller coaster was not over. Mooresville took over at its 40 and gained 30 yards on first down as Black caught a bubble screen. Mooresville would have been in Riffle’s range if not for a block-in-the-back flag. The ball was backed up to the Davie 40. Riffle came out for a 57-yard try with :02 on the clock. The FG wasn’t close.

For overtime, Davie won the toss and elected to take defense. On second-and-goal from the 10, DeBerardino handed to the explosive Black on a jet sweep. It resulted in a way-too-easy TD around right end.

Then it was the Davie offense’s turn from the 10. On first down, Hampton play-faked to running back Josh Robinson and had intentions of rolling left. But two blitzing linebackers smothered him six yards back.

On second down, Maddox split left to the boundary side while three receivers lined up on the strong side. Hampton and Maddox connected on a slant, making the TD look easy.

Maddox: “It was a very big night. I got my number called and I tried to step up. Some of my guys (Hudson and Little) fell down and I tried to fill in that spot. I knew it was my turn. My big-time quarterback, Nate, threw me a perfect ball and we got the W.”

Hampton: “The corner kept playing off and we had a slant. Za’Haree ran it perfectly.”

Down one, Devericks sent out the kicking team. There was confusion in regard to personnel, so he had to call timeout. During the tense break in the action, he decided to go for two.

Devericks: “We were running low on gas on both sides of the ball.”

Hampton took two steps to the right, an option run with Carney in the backfield. Hampton detected trouble and cut back. Left tackle Camden Beck, left guard Tanner Batten and center Jared Simpson had their defenders on skates, and Hampton wasn’t touched until he reached the goal line.

Devericks: “It’s really supposed to be a pitch, but (Hampton and Carney) saw them bring an overload pressure to the side we were going to option. Nate made a great play. It’s the exact same thing he did against Page (on a three-yard TD).”

Hampton: “The o-line really opened up that hole. They had three guys who widened out, so I decided to pull it.”

Carney: “Nate was reading the end, and it’s whatever he had to do. He made the right read.”

The War Eagles escaped by the skin of their teeth. They’re 3-0 for the first time since 2006. Mooresville (1-2) dropped its second straight.

Reynolds: “I have complete confidence with Nate and Tate in the backfield. That’s a two-headed monster right there.”

Bowling: “Me and my boy Gage (Recktenwald) were on a knee. We said a little prayer again, and as soon as it happened we stormed the field.”

• Reynolds hauled in the most catches in 14 games (Cooper Wall had nine in a playoff loss to Porter Ridge in 2017) and the most receiving yards in 39 games (Wall had 235 in a 39-29 win over Page in 2016). His numbers over two games: 14 catches, 265 yards. “Every day in practice we go at it one-on-one,” Bowling said. “I think we both make each other better. Jack is so elusive and quick. His routes are so crisp. And he has sneaky speed and great hands.” … Older brother Chris Reynolds of the Charlotte 49ers performed beautifully in defeat Saturday at Appalachian State, going 20 of 31 for 296 yards and four TDs.

• Davie didn’t accomplish much on the ground, but Carney (6-112 receiving) produced 100 receiving yards for the second straight week.

• Will Ben Norman return soon? “He thinks he will,” Devericks said. “Maybe put a brace on (the elbow). It’s maybe a hyperextension.”