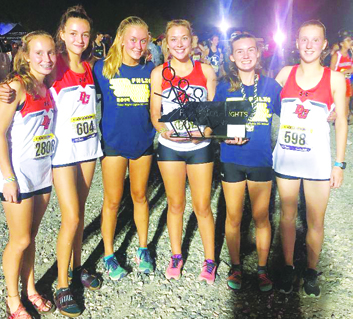 The Davie cross country team got its first look at the course which will host the conference, regional and state championships when it competed at Friday Night Lights at Kernersville’s Ivey Redmon Park on Sept. 6. Over 70 teams were on hand though close to 20 schools were unable to travel from the eastern part of the state due to hurricane Dorian. On a hot and humid night the War Eagles turned in one of their best performances in years as they claimed two championships and a third place finish.

Competing in the invitational division, the Davie girls brought home the title against 32 other teams with 24 registering full team scores. The War Eagles tallied 106 points to outdistance Community School of Davidson (125), Indian Land (129), West Stanley (216) and Voyager Academy (219). Emerson Frantz paced Davie with her third place finish in a time of 20:30. Lauren Tolbert of Highland Tech (Gastonia) claimed the individual title in 19:54. Sarah Mitchell of Raleigh’s Grace Christian School was runner-up in 20:21. A total of 177 athletes finished the race.

According to coach Rob Raisbeck there were a lot of happy War Eagles after the race. “The girls have been working really hard and it was great to see the hard work pay off,” said Raisbeck. “Riley and Paige worked together the whole race. Chloe and Lexi were in about 60th place at the mile mark and just kept passing people including a bunch of runners in the last 600 meters to clinch the win. We were probably in third place at the two mile mark.”

The Davie boys also turned in a stellar performance with a third place finish. Their score of 167 points trailed Lincoln Charter(78) and Forsyth Country Day (105). Oak Grove also finished with 167 points but Davie won the tie breaker with a higher finishing sixth man. South Rowan (259) rounded out the top five. A total of 40 boys teams participated with 33 registering team scores. There were 258 individual finishers. Will Scott of FCD won the individual title in 16:47 while South Rowan’s Noah Julian was second in 16:51. A trio of Lincoln Charter runners rounded out the top five.

The other first place trophy for the War Eagles came courtesy of the boys JV team. Davie dominated the field of 30 teams (17 scored) and 243 runners with 36 points to easily outdistance Ragsdale (68) and Northwest Guilford (89). Rounding out the top five were Lincoln Charter (107) in fourth and FCD (136). Ransom Cope of Ragsdale was the individual champion in 18:32 with Ryan Wiltshire of Lincoln Charter in second (19:46). Jackson Lawrence led a wave of orange and black across the line as he grabbed third in 20:13. He was followed by Carter Cooke in fourth ( 20:18), Sebastien McEwen in seventh (20:32), Reece Yount in eighth (20:34) and John Motley in 15th (21:15). Davis Byers (19th in 21:25) and Sam Warner (25th in 21:40) also turned in top 25 finishes. “That was a fun race to watch,” said Coach Raisbeck. “ There were a number of spectators close to where I was set up on the course who were wondering who the really good team was with DC on their uniform. Our young kids are starting to get noticed and that was really gratifying. Jackson and Carter ran up front the whole way. Sebastian and Reece were not in the top 50 at the mile mark but just crushed the last mile. They passed a ton of other runners in the last half of the race.”

Davie returns to action September 21 when  they travel to the Pfeiffer Invitational. “ This is a new race for us”, said Raisbeck. “We were going to race there last year but a hurricane forced cancellation of the meet. It will be a lower key event with fewer than 20 schools entered. That will set us up for October when things start to get exciting as we get closer to championship season.”