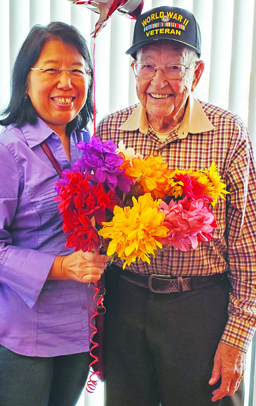 Hong Mizelle thanks World War II hero J.B. Caldwell for his help in protecting China in the war.

When Hong Mizelle organized a 93rd birthday party for J.B. Caldwell last year to help those of Chinese ancestry thank the World War II hero for freeing their country, she may have started something.

At the end of the party, he asked her if it he could have a party every six months. It also started a friendship.

She accompanied Caldwell to a veterans celebration at the Davie County Senior Center, and on that six-month anniversary, took him to lunch at his favorite local restaurant.

News spread, and Dave Kerr, son of Flying Tiger pilot Lt. Donald W. Kerr, wanted to throw Caldwell a party in Raleigh this year, but health issues prevented that. “They said they would fly here to Mocksville to visit him later this year,” she said.

Mizelle took Caldwell to lunch on Saturday, Aug. 24, a day before his birthday. As usual, he was the first to arrive at the Jin Jin Chinese Buffet in Mocksville.

She presented him with an American flag balloon, flowers, a Yun Nan Chiense girl’s hanging art (He was stationed at Yun Nan Province, China, 75 years ago as a nose gunner on the Cocky Bobby airplane.) Mike Butero at Goin’ Postal provided a framed tribute.

Lunch was on the house, and she learned his favorite dessert is banana pudding.