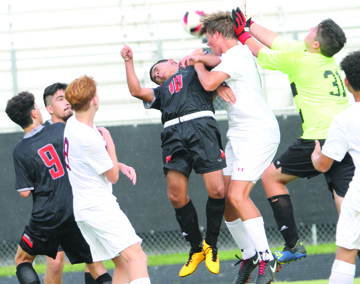 Senior forward Kendell Obando does a header in heavy traffic. - Photo by Floyd

Davie’s varsity soccer team outscored visiting East Rowan in the second half on Aug. 27. Davie, though, left a lot to be desired in the first half, and the rocky start cost it in a 6-4 loss.

The Mustangs, who lost 5-1 to Oak Grove earlier, evened their record at 1-1. Davie fell to 0-2 in nonconference play.

Coach Nathan Stephens said: “We should have (won). We were the better team. We’ve got to put two halves together. It’s a bit frustrating, but we’re a young team (with four seniors, 11 juniors, three sophomores and two freshmen). For most everybody on the team, this is their first year on varsity.”

The War Eagles dug a 4-1 hole in the first half, the goal coming on a breakaway by sophomore Anthony Ortiz. Getting goals from freshman Kevin Morgan and juniors Bernardo Rodriguez and Danny Torres, they hit their stride in the second half – although it was too little too late.

Stephens: “We’re getting better. We’ve just got to learn to put two halves together. It was pretty clear that we were the better team. Sometimes the better team doesn’t win.”

Two days later at Alexander Central, Davie was dealt a dispiriting 4-1 loss. The Cougars (2-2-1), who had only managed five goals across four games, built a 3-1 halftime lead and coasted from there. Ortiz had the lone goal for Davie (0-3) with an assist from Rodriguez.

Stephens: “I’m hoping it was the second-day-of-school blues. We looked very tired and low energy. We just did not play good. We will regroup and be ready for (this) week.”