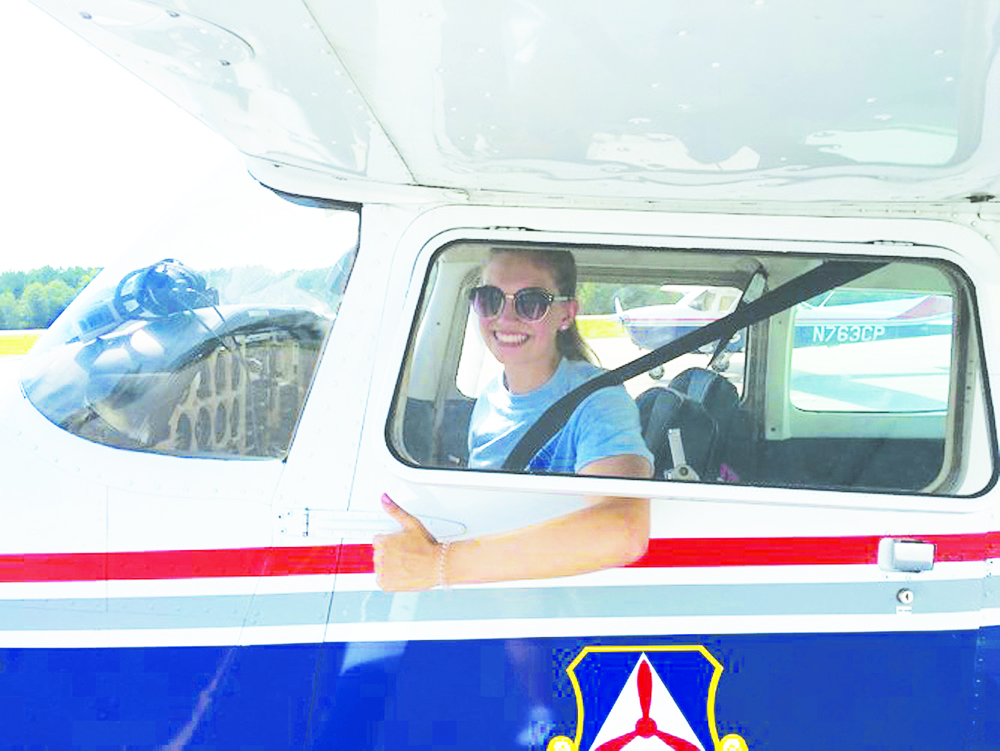 Cadet 2nd Lt. Ella Orgain is ready for her solo flight at the National Flight Academy.

National Cadet Special Activities, or NCSAs, are national training events that Civil Air Patrol cadets from all over the United States attend.

Some are public services, such as National Blue Beret in Oshkosh, Wisc., at the world’s largest fly-in.

Some include flight training and soloing, such as at the National Flight Academy (NFA) in Camden, S.C., which is a week-long flight school. C/2d Lt Ella Orgain, from the Sugar Valley Composite Squadron, was one of only 24 cadets chosen to attend this training school.

Each day, the cadets attended a morning briefing. After eating and checking in with the flight instructors, cadets picked up the keys to the airplane from the Flight Base of Operations and started the preflight check with their flight partners.

Next, the flight instructor and two students per plane taxied and flew over to the assigned airport to work on tasks. Cadets had approximately an hour of flight time each before ground school, which all cadets attended in the afternoon for 3-4 hours.

After dinner and more flight training in the air, cadets returned to the airport around 8 p.m. to refuel, double check the oil, and clean the plane up again while the flight instructors completed paperwork and filled out logbooks.

Then it was back to their rooms to study the assigned emergency procedures and look ahead in the chapters for what would be covered next in ground school.

“We had long days, lots of work and intensity, but it was so worth it,” Orgain said. “I made so many friends from all over. All the seniors there were immensely helpful and each one wanted to see all of us succeed, so I had flight instructors beyond my own giving me tips and insight.

“Being able to solo is also one of the coolest things I’ve ever done. Though I had only been flying seriously for four days before and had a mere eight (which was the minimum required to solo) hours, I felt extremely prepared and excited to be able to accomplish a huge goal of mine.

“As far as what I learned from NFA, I’d have to say that I surprised myself with how much I was able to do, how far I was able to come, in such a short amount of time. With focus, a positive attitude that is open to new challenges, and confidence in oneself and others, anyone can do anything.”

Those age 12-18 who are interested in aviation or aerospace education,  learning how to survive in the wilderness, perform search and rescue procedures, and get involved in a military-based program, can become a cadet in the Civil Air Patrol. Visit www.capmembers.com for more information about CAP and the cadet program.